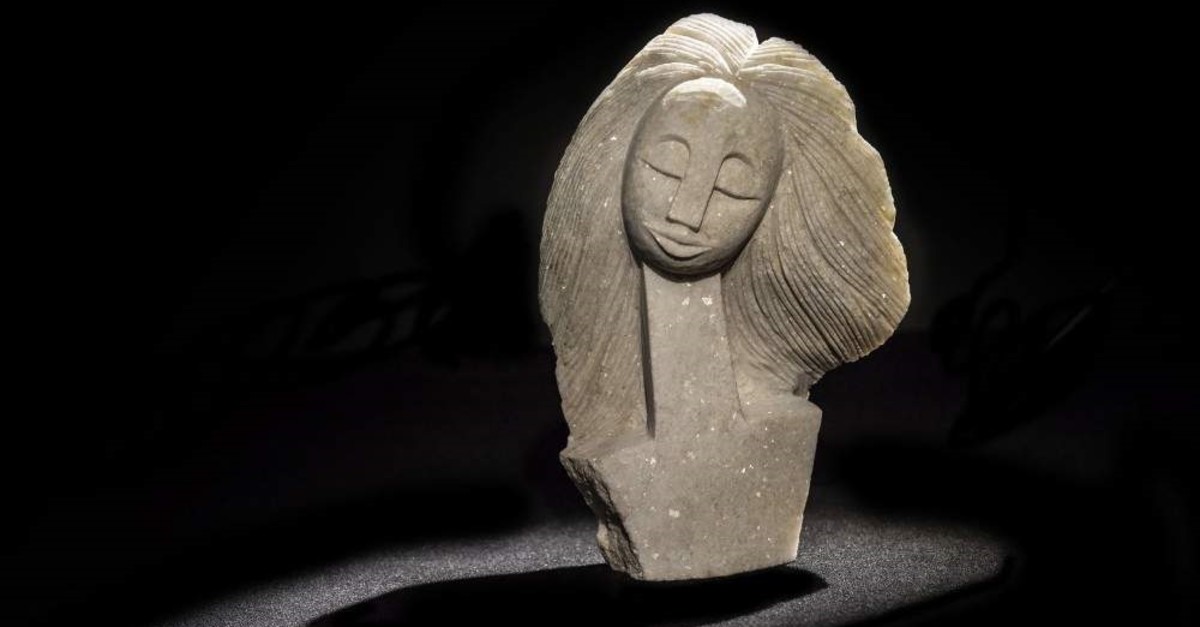 Spirits in Stones features a total of 42 sculptures made of precious and hard-to-process stones.
by Daily Sabah Dec 08, 2019 5:30 pm

The Shona, Zimbabwe's largest tribe, are famed for their unique sculptures made from a variety of durable stones, which can be seen at Uniq Istanbul until Jan. 17

Art Vision Gallery, founded by architect and collector Hans Otto Nagel at Uniq Istanbul in Maslak, Istanbul in 2016, has kicked off the art season with a series of Shona stone sculptures.
The "Spirits in Stones” exhibition opened on Oct. 16 and has since invited Istanbulites to remark upon these uniquely Zimbabwean sculptured forms. The fascinating works have been crafted from artists who hail specifically from the Shona tribe, who constitute the country's largest group and are regarded in local lore to have been the last custodians of King Solomon's mines. Some 50 Shona sculptures, crafted from a number of precious stones, from inspiring precious stone Opal to Butter jade, can be seen at Art Vision Gallery until Jan. 17.
Set the good spirits free
Directed by Maria Wirth, Aslı Sabuncu and Gamze Alpar, Spirits in Stones features a total of 42 sculptures made of precious and hard-to-process stones such as limestone, which consists of the skeletal remains of corals and shellfish; cobalt, which is rare in nature and known for its fragility; serpentine, which is favored by many sculptors for its durability; verdite, which is often used in animal carvings; leopard stone, which has yellow and black marks; lepidolite, which is even more fascinating in sunlight; opal, which means “precious stone” in Sanskrit and is believed to balance the emotions; and Butter jade, which has a history dating back 50 million years.
These sculptures, which together form some of the richest varieties of stone reserves in the world, possess not just an allure stemming from their minimalist style, solid forms and smooth surfaces, but a number of spiritual properties. The Shona people believe that the souls of their ancestors lie within the stones in order to free good spirits and thus to convey their message to God, or "Mwari." Many young, Zimbabwean artists began receiving international attention for these contemporary designs, steeped in traditional lore, in the 1950s and 60s.
Inspiration for Picasso
The Shona are a Bantu ethnic group that make up 80% of Zimbabwe's population and are considered to have formed an integral part of the country's culture since 1200 A.D., the stone sculptures first grew to international acclaim in the late 1950s, thanks to the efforts of Frank McEwen, the founding curator of the National Museum of Zimbabwe. Considered contemporary by art markets, Shona art soon found a place in the collections of world-renowned museums such as the Rodin, the Museum of Modern Art in New York, the Mankind Museum in London and the Kresge Museum in Michigan. McEwen often said that the Shona sculptures inspired the works of Pablo Picasso, a close friend of his, and expressed his admiration by apparently saying: “Everything I need to know about Africa is in these stones.”
The sculptures have also been included in the personal collections of many famous figures, including Princess Diana. The art of the Shona, reported by The Economist as “The World's Best Unknown Sculptors,” has made fame enting the creative process of a number of contemporary artists in Zimbabwe, including Claud Nyanhongo, Agnes Nyanhongo, Dominic Benhura and Thomas Mukorobgwa and countless others.
“Spirits in Stones,” sponsored by Gökhan Gül and the Klip Kuns Gallery, can be seen at the Art Vision Gallery at Uniq Istanbul until Jan. 17, 2020.
Space for young artists
Art Vision Gallery, founded in 2016 as an artist workshop to support young artists and artistic production processes by architect Otto Nagel, a collector of artworks from a young age, continues to create room for young artists and art lovers on the second floor of Uniq Istanbul and in its booths in different parts.
ISTANBUL / DAILY SABAH
Last Update: Dec 20, 2019 2:13 am
RELATED TOPICS