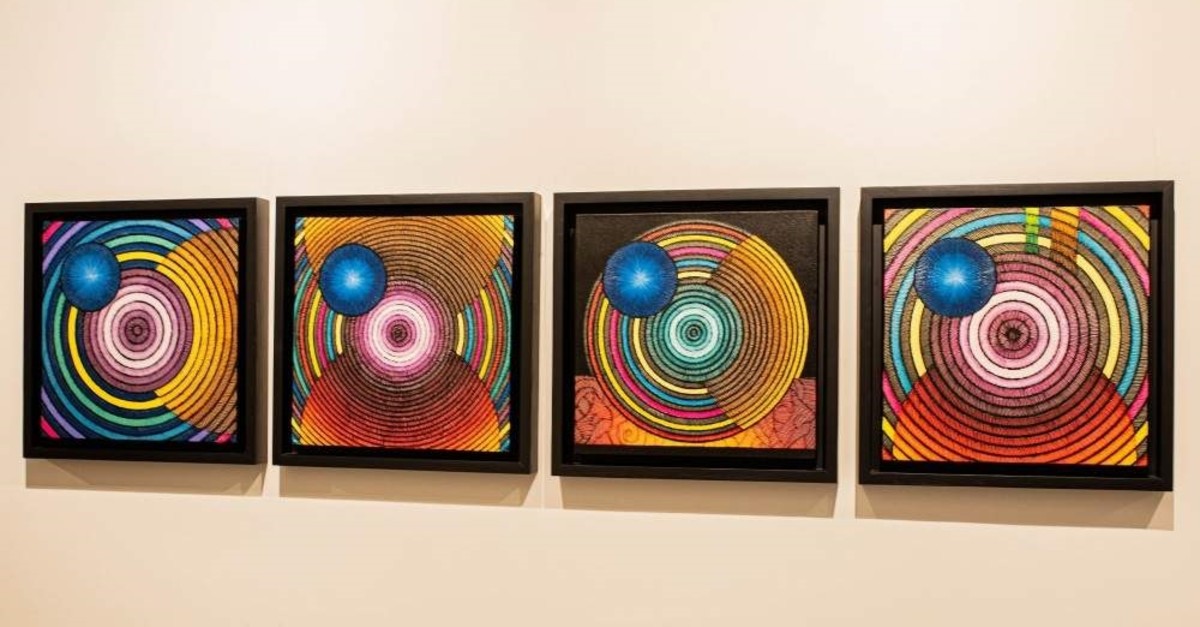 Born in southeastern Batman province in 1966, Turkish painter Ahmet Güneştekin started his art career in the workshop he opened in Beyoğlu district in Istanbul in 1997 and became one of the world-renowned artists in the field of modern art. Having presented solo exhibitions in many parts of the world, Güneştekin returned after a recent hiatus with the exhibitions "Memory Room" in Istanbul and "Selected Works" in Ankara.

In an interview with Anadolu Agency (AA) on his life journey, artistic approach and exhibitions, Güneştekin summarized his story of attracting attention in the international art arena. "Many Turkish artists who are successful in various areas and disciplines come from different cities of Anatolia. Nobody comes from an aristocratic family in a huge metropolis. Yaşar Kemal, one of the most important writers in world literature, was from Van province but was born in a small village in a family that had migrated to Adana province," he said, adding: "Ibn Khaldun has a saying, 'Geography is destiny,' which I sometimes find right, and sometimes wrong. It is like this all over the world."

Pointing out that many artists are born in challenging geographies, Güneştekin stated that although this may seem like a handicap for some, an artist who has the courage and power and who believes in his creativity can very easily turn what looks like a handicap to an advantage. "When you have grown up under difficult conditions, you make more efforts than those who have grown in a more comfortable environment to work, introduce yourself and prove yourself and, in a sense, you are under greater burdens. This has something to do with the artist's self-confidence and courage," he added.

Indicating that he was born in Batman, which is home to many different cultures, ethnic identities and beliefs, Güneştekin noted that among his neighbors were Assyrians, Armenians, Chaldeans, Arabs, Turks, Kurds and Yazidis. "You get to know their voices, ballads, laments, traditions, weddings and death ceremonies, and it is an advantage for an artist to grow in the colors of such a culture and geography. I've been one of those who made good use of that advantage. That is why this multiculturality forms the basis of my art," he explained.

The artist produces works from a unique perspective using various materials. Speaking about his style, Güneştekin continued: "I am not an artist trapped in a canvas painting. I'm an artist who is constantly concerned with discovery and new creations. So, I have had a lot of cross-disciplinary journeys. Even the canvas paintings I made meet at least eight to 10 different techniques in themselves." Noting that he can bring together many events he has witnessed in his country and in the world through art, Güneştekin said: "Just being trapped in something means that you limit your own world and do not have much to say. I am a person who gets bored very quickly and I always try to do something new. If you are a reader, a researcher, and you are fed by different disciplines such as music, art, theater and literature, you can easily achieve interdisciplinary transitions, because the basis of art is knowledge."

The artist expressed that his art is fed by Anatolian stories and myths, and the expression of this emerges as modern art products. "Tradition is actually a word that educates us. Tradition already gives you clues. I take the past as a reference and carry it to the present time with my own language. This is my secret for my productions. For instance, I carry thousands of years of stories and ceramics with the same tradition to modernity with my own stories and forms. Or, I bring them together with my own language in painting, installation or sculpture. It is considered something different in the world and is accepted in this way," Güneştekin said.

Touching on his exhibitions "Memory Room" which opened in Istanbul last week and "Selected Works" in Ankara, Güneştekin said: "The exhibition in Istanbul opened in a 4,000-square-meter area at Pilevneli Gallery. It is a thematic exhibition. It is a solo exhibition in an area the size of a fairground. People are very interested in it as it consists of different disciplines. All the halls are full of people and the interest is increasing because it is free. A week later, we came to Ankara. I love the city very much and I think there is a good art audience here. CerModern is of such importance to me: I had another solo exhibition here in 2012. I accepted with pleasure when its manager told me that a new gallery would be opened and that they wanted to open it with my show. I have met with the people of Ankara, and it is also a matter of pride to be part of a new art space."