The uncollected thought: In the land of Hale Tenger 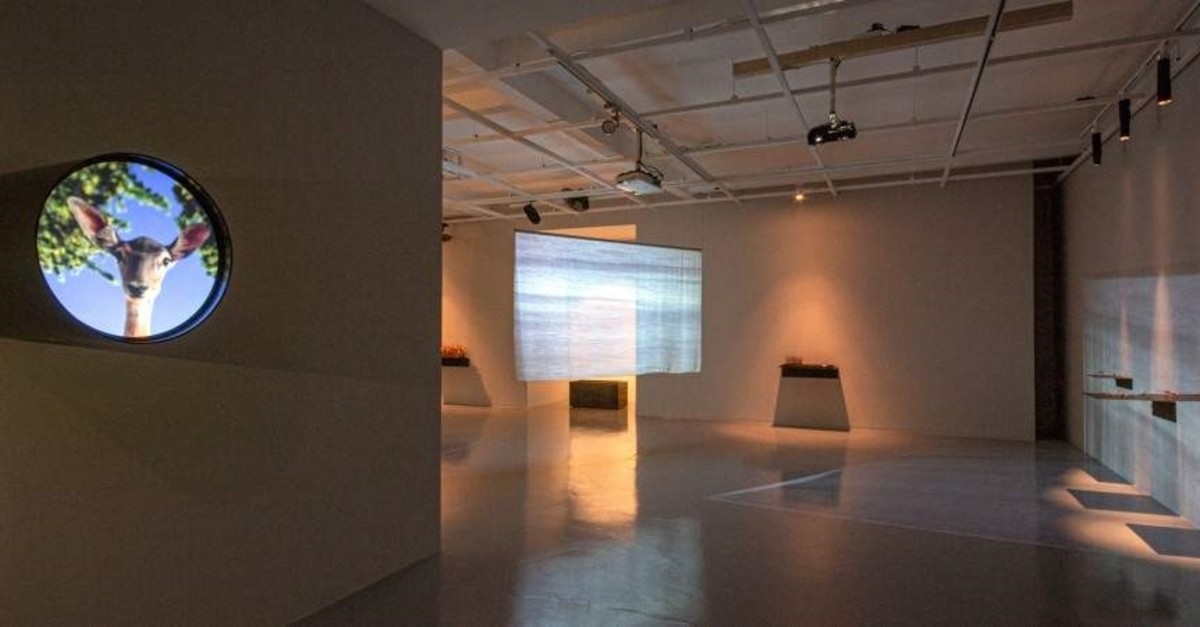 On view through Jan. 18, the latest solo showcase from Hale Tenger takes place at Galeri Nev Istanbul under the title "Where the Winds Rest," conveying the serene ambiance of an uncanny, Freudian ecology

In 1919, Sigmund Freud published the essay "The Uncanny" as an exploration of aesthetics, in which he admitted from the start was not his particular field as a psychoanalyst. Nonetheless, he ventured forth into matters of literal definition. The word "arouses dread and creeping horror," he determined, although distinguishing it from the "fearful" by pointing out its underlying ambiguity as a concept that runs counter to the sublime, but which affects the same mental region.

Hale Tenger, a budding master of the environmental installation, invites people into a window of footsore curiosities at the Mısır Apartment on İstiklal Avenue, wherein the cube of Galeri Nev Istanbul is fit with a series of videos and sculptures whose mediums merge, and project overlapping volumes of light the color of fields, waters and skies. Her muse is a poem by Edip Cansever, an antique dealer and naturalist of the Second New literary wave.

By the time Freud confessed his ignorance on the topic of aesthetics, he had already authored at least 12 books and was poised to crystallize his theory on the death drive as a psychological principle equal in importance to that of the impetus to life, what he equated with the workings of the libido, a modus of thinking for which he is best known. The instinct to disintegrate, Freud conjectured, could also be understood as the Nirvana principle.

To certain interpretations of Buddhist philosophy, karma is symbolized as a gust of wind and is often synonymous with action.

A person's karma is simply what they do. But reaching perfection, in that tradition of metaphors, or in that mythology, is conceived as a windless state where even atop the summit of a great peak, the air is still. Cansever, writing between deals at the Grand Bazaar, came to a similar conclusion in his poetics.

"There is a place where the winds rest / The resting winds, take a break," wrote Cansever in the middle of his poem, "Where the Winds Rest," which inspired Tenger to serenade a blank art space with crosshatches of shadow under an aquamarine luminescence emit from an oval-shaped video projection, likened to the round lookout holes across the hull of ships for those in steerage to see phosphorescent shocks of biology in the blue depths.

"Cherries, waters, mirrors" (2019) sets a surreal tone, with its pastiche of plastic media, including bronze, copper, marble and glass. In its own corner, a gleaming green moving image shows an underwater scene in which an inanimate object, or dead creature, lies on a bed of water vegetables. The otherworldly approximates to reality, as lived experience in nature, which Tenger artfully captures in the frame of her exhibition.

The sound of propelling fans is a device significantly employed by Sarkis to create an atmosphere at his historic installation, Çaylak Sokak at Arter's "What Time Is It?" group show, which Tenger also used when she first approached Cansever's poem in 2007. The lines, "Didn't we pull the body out from underwater / We didn't pull the body out from underwater" appear toward the end of "Where the Winds Rest." Over the course of 12 years, Tenger did not waver from replicating the poem's title in her artworks, nor from investigating its inner meanings.

The lines, which repeat themselves to dramatic effect, vary with slight changes to the verbal conjugation, sharpening Freud's focus on his psychological etymology of the uncanny. The old intellectual lion found it necessary to conjure up an uncanny sensation in himself before writing about it in an authoritative sense. "Where the Winds Rest" is an experiment in conjuring such a feeling, a powerful one that is striking for its brand of familiarity that is not wholly desired, but that, in the language of Freud, creeps up on one.

In the marble sink affixed to a wall at Galeri Nev Istanbul for "Where the Winds Rest," the bronze cherries therein enchant for their static presence alone, summoning the powers of the imagination. The interior is suffused with subtle darkness enough to accent such touches as lucid videos of gleaming waves cutout into a hanging mirror. Beside it, the surface of a circular monitor ripples like a calm puddle into which a deer gazes, at peace in its forest home. The piece is rather poetically titled "Magic is the mirror of a deer" (2019).

The deer is a powerful symbol in Turkish literature and the nation's cultural history, utilized by the late Ottoman poet Ziya Gökalp to express modern pan-Turkic nationalism, or when the folkloric landscapes of Central Asia link with Anatolia through fantasies of its fauna. The 13th-century mystic humanist Haji Bektash Veli, a contemporary of Rumi, appears to followers as a deer. Many believe it to the extent that they refuse to hunt deer out of precaution. Furthermore, it is the Hittite motif of a long-antlered deer encircled by a ring of bronze that was taken up by Turkey's capital of Ankara.

TO COME UP FOR AIR

But the strength of the show and its most affecting elements are a pair of vinyl screens that waft gently as its centerpiece. Airy and transcendent, the tranquil mood that Tenger has created has a semblance with her work for the 16th Istanbul Biennial, one of the strongest installations of the city's flagship art event. Her voice could be heard whispering a nature poem as pools of water were reflected against obsidian discs and the horizon from the isle of Büyükada.

Tenger evokes the pacifying Nirvana principle inherent not only in human psychology but throughout creation. That the world has the tendency to be at peace, to dissolve itself of ego and predominance holds a current of being that is as obscure to the eye as it is palpable to the heart. In similar regard, essayist Bolesław Micińsky sought to render visuality in words with his piece, "Portrait of Kant," which in 1994, Tenger also adapted into an art piece.

"The division of the arts into 'spatial' and 'temporal' belongs to one of the most interesting chapters in the history of aesthetics," wrote Micińsky in 1979 for The Polish Review, echoing concerns raised over half a century earlier by Freud. Micińsky essentially examines the fuzzy mental boundary where sensations received via artificial media coalesce into a similitude of full-body immersion, recreating the uncanny feeling that arises when what is seen is felt as remembered, without recalling having had the actual experience.

With acute temporal awareness, Tenger self-references her works, their conceptual and physical features, amply deviating from past efforts so as to remain innovative. The black reflective pool curated against the longest wall at Galeri Nev Istanbul is grown with metallic shoots of herbs, in which lines of Cansever's poem surge patiently up through the shallow liquid vessel reminiscent of her piece at the biennial.