Bauhaus Imaginista at SALT Beyoğlu: A century of revolution in design 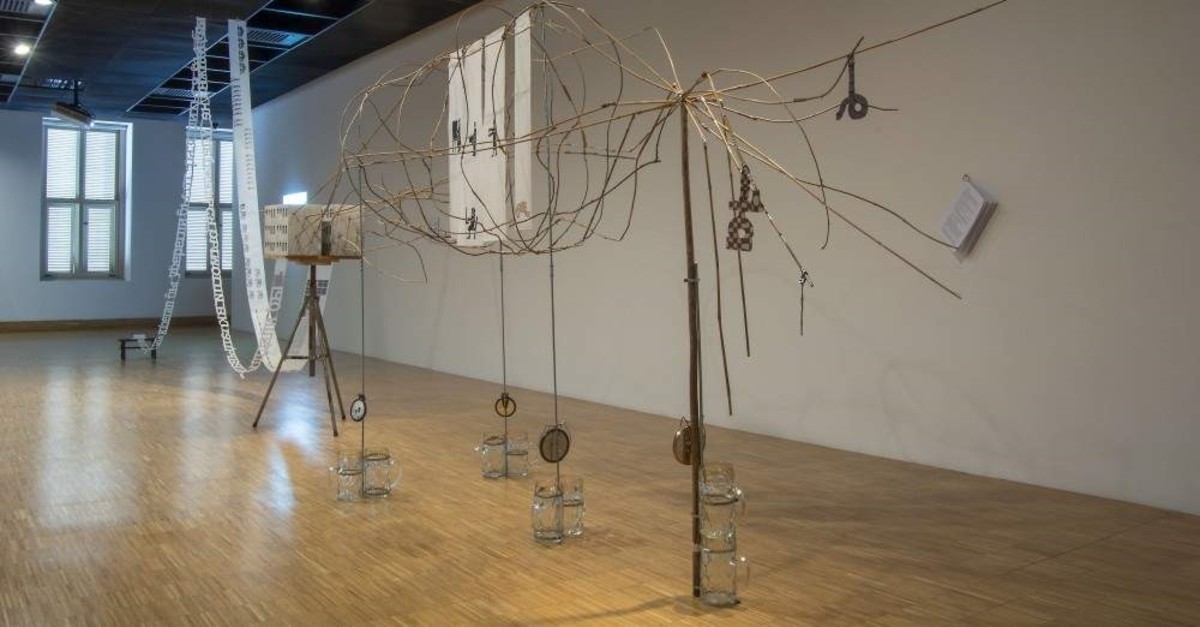 It is hard to explain, let alone sum up in a paragraph, the influence of a movement as irreversible and all-pervasive as the Bauhaus school on our everyday lives. The design house, founded by architect Walter Gropius in Weimar, Germany in 1919 is responsible for a shift in mentality toward functional design and has changed our expectations from everyday objects down to the simple sugar container as much as what constitutes a decent font for a business report. It has been a force behind every trend in architecture in the last century, from Soviet brutalism to the modern proliferation of metal and glass filling the skylines.

The school was at the cutting edge of the development of approaches, theories, and studies that are still referred to by designers in every field to this day. The Bauhaus was the first to map out with precision, such obscure technicalities as the optimal height of a kitchen sink and how far the back of a chair should slouch (although a number of high school head injuries will attest to my early doubts).

Far more than just a school of art and design from where students of the lowly crafts could shuffle off into manufacturing jobs, while students of the lofty fine arts could be awarded their creative credentials; the Bauhaus sought to instill a new concept of the teaching and application of design that would bring the two worlds together. "There is no essential difference between the artist and the artisan," he declared, "The artist is an exalted artisan."

Of course, no movement this radical comes without its critics, and if like many, you are horrified by the idea that art should be practical and useful, rather than a romantic exercise in aesthetics and expression, then you would be in good company: after all, the Nazis proved such staunch purveyors of romanticism that Hitler decided the closure of the school would be the first item on his to-do list after taking power in 1933.

Unfortunately for the old tyrant, this led to a school already internationalist in scope being cast out throughout the world, its focus on functionality, efficiency, and minimalism finding as many adherents among Soviet ideologues as capitalist business moguls on either side of the Iron Curtain.

Bauhaus Imaginista is a series of publications, talks, and exhibitions being held all over the world to commemorate a century since the founding of the school. The exhibit has been split into four chapters that take various approaches to comprehend the impact of the school; each drawing on discussions that emerge from a different "gegenstand" – or "focal object" from one of its earlier members.

The SALT Galata is now hosting the Istanbul leg of the exhibit, focusing on the chapter "Moving Away," which draws from a 1927 work by cubist and fellow Bauhaus instructor, Paul Klee. It showcases the way the school changed how art and design are taught, and how this institution has been a platform for the betterment of the world.

For curators Marion von Osten and Grant Watson, the task of the exhibit is to "articulate a new interpretation of the Bauhaus and radicalize the concept of liberation for today."

In a speech to mark the opening of the Istanbul itineration of the exhibit at SALT Galata, Grant Watson admitted that "the difficulty of explaining the conceptual nature of Bauhaus requires a mix of all elements – art, design, and talks."

The first part of the exhibition welcomes us to all aspects of the school as it existed in the hey-day of 1920s Weimar. Notable gems include articles from Bauhaus' monthly journal, full of articles by students and teachers (not to mention an eye-brow raising amount of advertising).

Rather than a collection of stuffy theories, the magazine is multimedia and packed with fun and quizzical visuals that demonstrate the new ethos with a sense of delight. One of these includes a timeline comparing a chair the school produced in 1921 that Watson highlights as "expressionist and over the top," against its 1925 product which takes on the "highly modernist and tubular form" not dissimilar from the kind of Ikea-ware we are familiar with today. In a bittersweet reminder of the unbound utopianism of yore, the timeline ends with a photo of a woman seemingly levitating in a couched position dated "19??" and captioned: "In the end, we will be sitting on elastic pillars made from air."

However, the curator is correct to assert that this plethora of letters, photos, and collected articles would be "too dry to exhibit alone," so we are treated to video reels of theatrical works and fun light installations whose only function (although a crucial one of the Bauhaus) was to liven up the atmosphere at one of the school's legendary parties.

Meanwhile, we have works by contemporary artists responding to some of the movement's pioneers. Alice Creisher's 2018 work inspired by the life of Philipp Tolziner stands out as an installation almost rollercoaster track in its appearance – and reflective of just such a life for the former furniture maker whose revolutionary passion for design would ultimately carry him to war, and from then on – the gulag.

As part of the "Moving Away" chapter of Bauhaus Imaginista, the SALT hosts an investigation of how the pioneering approaches of the movement were received and adapted around the globe. In the holistic spirit of the school itself, this involves workshops focusing on a number of texts by foreign-educated professors who arrived at Turkey's leading design departments in the 1950s, carrying with them Bauhaus theories and methods that blend the technical with the artistic at an elementary level.

The texts are displayed on a tableau of classroom furniture produced along the functional Bauhaus lines. The principals of Bauhaus having been demonstrated in the lower exhibit space, one suddenly begins to appreciate the essentialness of each, simple component of a design as innocuous as a chair; the functionality of the rubber footings, the functional chic of its metal, tubular profile, and the consideration of the human physiognomy in the groove of the seat. Suffice to say, anyone reading this from the comfort of their office chair should stop to appreciate the Bauhaus for having literally saved their assets (no need to buy a cushion for extra padding).

These texts serve as examples of the mindset of the Turkey of the 1950s, in which anything emanating from the West was ready to be imbibed without question. Little attention seems to be given to anything developed beyond Europe or any closer to home – this despite many of the theories and methods themselves having been inspired by and sourced from items as varied as North African mosaics to Incan textiles. Similarly, the very terminology used carries a smattering of French and English terms, instead of relying on Turkish vernacular.

Speaking of contrasts, the most fascinating aspect of the exhibition comes in quite the opposite approach developed later in the Jawala Project; an initiative taken by two Indian design schools in rural Rajasthan in 1975, which departed from the academic and urban-centric nature of design in a radical attempt to understand the challenges of poverty and oppression.

The institutes formed what became known as the "rural university" aimed at "making the school relevant" to teach managerial approaches and blend local knowledge of handicrafts and methods, readily available materials, and more informed knowledge of design in order to bring about better sustainability of local livelihoods.

Kolkata was the first city to host a Bauhaus' exhibition outside Germany back in 1922. Both design communities established strong ties as they took varying, yet complementary approaches to their goal. This project best exemplifies the activist, utopian ambitions of both traditions. Texts are presented alongside examples of chic and simple bamboo baskets and chairs, as well as fascinating video footage and enigmatic photography showing local residents applying the skills nurtured through the program, with truly inspiring results.

Bauhaus Imaginista can be seen at the SALT Galata on Istanbul's bustling Istiklal Avenue until March 10, with details of the exhibit's free side-workshops and talks available on the gallery's website.