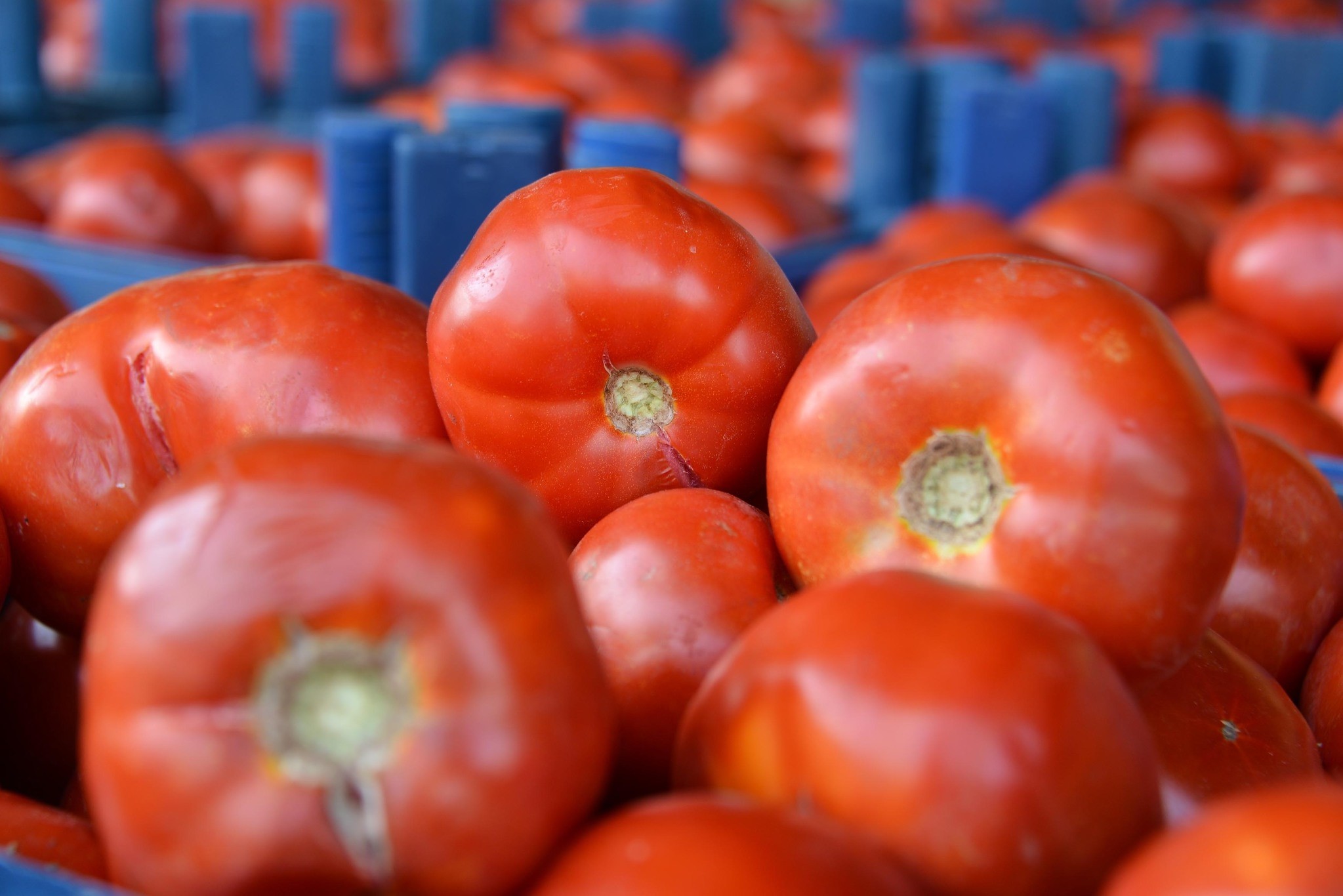 Summertime bringshot weather but also abundance to markets in Turkey, where you can find many fruits and vegetables fresh from the field

Summer is a bountiful time at produce stands in Turkey. The wide selection of mouthwatering fruits and diverse vegetables and legumes make for an exciting time to be in this country, which places such a high emphasis on eating seasonally and obtaining the optimal variety.

Therefore, the following is a guide to what is in season, what to try and which variety to buy at fruit vendors' stalls this summer. 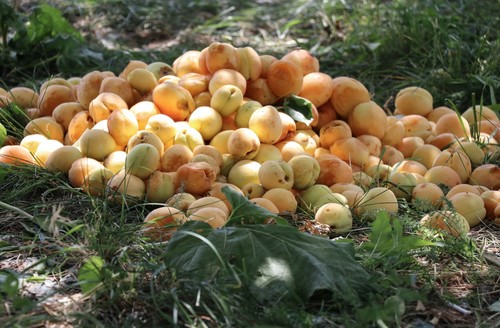 The fruit Turkey is most know for around the world is undoubtedly the beloved apricot, or "kayısı," and rightly so, as Turkey is the world's leading producer of the fruit, both fresh and dried, and accounts for 70 percent of the global total in the latter. The province of Malatya is apricot kingdom in Turkey, accounting for 90 percent of Turkey's exported apricots and the "şekerpare" is by far the most coveted variety. While it differs from traditional apricot in that it is small, round, smooth and has a reddish blush, it bursts with a deliciously moist aromatic and sweet flesh that is well-worth the higher price. "Şalağı," a variety from Iğdır, a province that partly houses Mount Ararat, is also a favorite among aficionados and is slightly larger and oval in shape, lighter in color and harder in density and drier, yet is guaranteed to give a sweet bite every time. 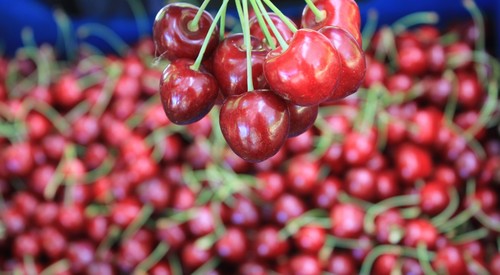 Turkey is also the largest producers of cherries in the world, and we are fortunate enough here to be able to purchase the sweet, sour and white varieties.

"Kiraz," as the sweet varieties are called, remain the stands until mid-August, so it is now or never to experience this wonderful fruit currently in its prime, so get them while you can. The most favored variety is referred to as "Napolyon" and are a deep burgundy color and smaller and softer, but have a wonderful deep, sweet taste. "Salihli," another popular variety, are plumper, redder and have more of a crunch to them. While slightly less sweet, the rare white cherry is also worth a try. They are hard to come by, as 90 percent all of white cherries in Turkey are produced in the Ereğli district of the central Anatolian province of Konya.

Sour cherries, referred to as "vişne," will also be on stands this month. They are smaller, darker and squishier than sweet cherries and are generally used in preserves or cooking, so beware before buying to not confuse the two varieties or you may end up with a pucker.

In mid-summer months, the small, tart green plums that are ever-so-popular give way to the harvest of red plum varieties of which the plump, round Anjelika is a favorite. Its flesh of sunset hues is a burst of sweet and tangy juiciness. Another popular variety is the more reserved damson plum, or "murdum eriği," which has a deep purple skin and moist, yellow flesh that has a distinctive, sweet taste.

What you need to know about peaches is that the best ones come from Bursa, and if you can find the rare variety "deve bastı," which means "the camel stepped on it", then you must give them a try. Called the Saturn peach in English, while these donut-shaped fruits may be less juicy then the average peach, they are bursting in sweet, aromatic flavor. Meanwhile, if you see a fruit that looks bigger than a cherry and smaller than a plum with smooth skin that ranges from light green to pink, you have come across the beloved "beyaz nektarin," also referred to as "bayramiç beyazı," referring to the Çanakkale province they hail from. A unique, crunchy and refreshing fruit, it has a refreshing, subtle, yet pleasant aroma.

'Tis the season of the berries, if you can find them that is. While the magnificent blackberries, or "böğürtlen," and mulberries, "dut," will soon be on their way out, fresh raspberries, or "ahududu," will be available through July and August although these garnet gems are some of the rarer items to find in farmer's markets.

There is no doubt tomatoes in Turkey in the summer are fantastic. The tradition in nearly every household in Turkey is to stock up on tomatoes in August when they are at their peak of flavor and boil them down into tomato sauce and paste to use in the winter. The most coveted tomato varieties come from Kösedere in Çanakkale, while the larger and somewhat misshaped pink tomatoes are also a popular find in summer.

Turks love their cucumbers, and a street food staple in summer, like corn on the cob, is a cucumber doused in salt. What to know is the smaller variations of cucumbers are the most delicious and the "Çengelköy" variety is the most popular.

The summer harvest is also a spectacular time to enjoy a number of fresh legumes still in their pods. You can find peas, or "bezelye," broad beans, which are called "bakla" and "börülce," which are black-eyed peas available still in their pods for the next month or so. You, too, can do as Turks do and separate the legumes from their pods to dry and store them for the winter. 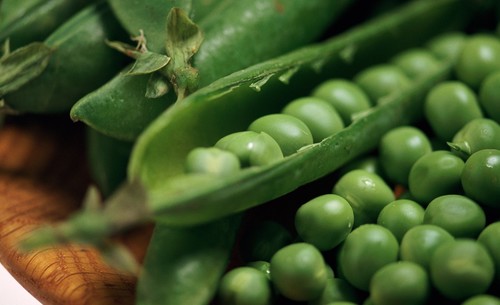 Arugula in Turkey is divine and is chomped on as is with a squeeze of lemon to accompany fish. "Semizotu," Turkey's answer to purslane, is mixed with yogurt and served as a meze. "Deniz börülcesi," in English glasswort or samphire, is a fortunate find, but requires a less fortunate and somewhat timely method of blanching and then separating from its pod, which at second thought may best be left to the culinary professionals who dish them up with olive oil, minced garlic and a squeeze of lemon.

Summer is the time when the best eggplants, squash, peppers and cucumbers and basically all pickling and drying vegetables can be collected for these winter pantry-preparing processes that traditional Turks still do. "Bamya," or okra, is another vegetable to rear its head in summer, which according to legend, you can slice off in such a way to ensure the slimy juices do not let their way when cooking. And of course, last but certainly not least, Turks have an unabashed love for watermelon and other melons, which have a spot at practically every dinner table set in summer. In August, keep your eyes out for figs, called "incir," which is another product in which Turkey is a world-leading producer, as the purple and green varieties, purple being sweeter and the latter is also used for drying, will be hitting the stalls in full force like grapes, ushering in the fall.