Take a ferry from Turkey to Greece for quick getaways 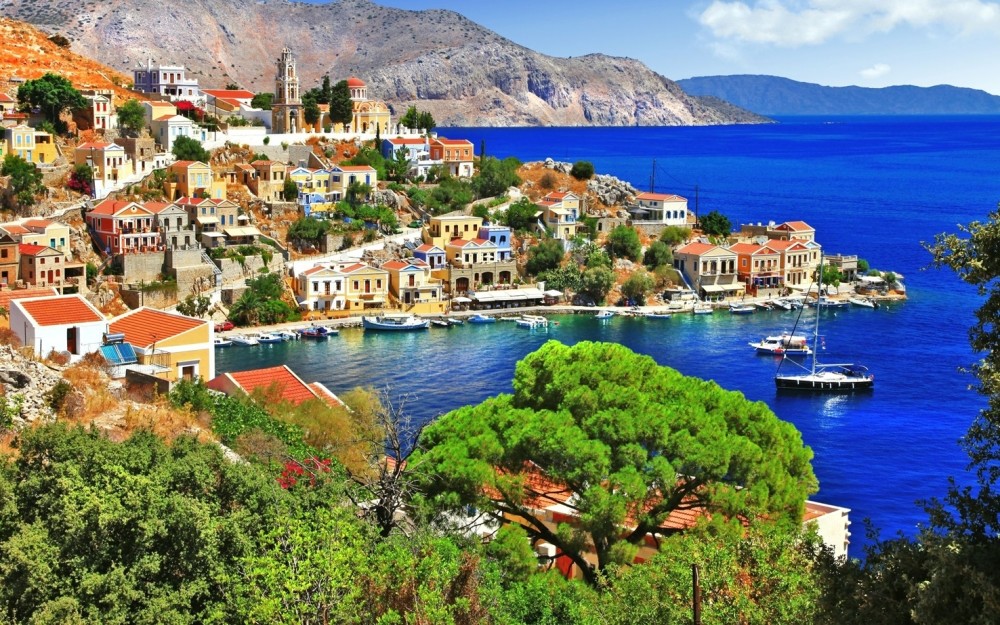 The Qurban Bayram holiday is around the corner and a short cruise from the Turkish coasts to the Greek islands is a good choice for those who want to get the last glimpses of sea, sand, sun and summer fun

Greece has a number of islands, the Dodecanese and the North Aegean island clusters, neighboring Turkey's western coast that are serviced by regular ferriea and hydrofoils making for a great vacation destination and quick getaway that is nice and easy, whether it be for a daytrip, weekend excursion or even for the upcoming Qurban Bayram holiday.

Destinations along Turkey's Aegean coast, such as Bodrum, Ceşme, Kuşadası and Ayvalık have boats that service Kos, Chios, Samos and Lesvos, respectfully. From Turgutreis, located along the Bodrum peninsula, boats set off for Kalymnos and Leros and in Datça, services to Symi and Rhodes kicked off this month, the latter of which is also serviced by Marmaris and Fethiye, adding to the number of island destinations served by boat transportation between Turkey and Greece.

The newest addition to the Greek destinations connected to Turkey by ferry or hydrofoil is the beloved island of Symi. For eight weeks starting at the beginning of summer, there will be fast hydrofoil services to and from Datça on the "Flying Poseidon," which sets sail every Saturday and Monday from Datça to Symi at 10:30 a.m. and departs on the same days from Symi at 4 p.m. Referred to as Sömbeki Adası in Turkish, Symi is located just nine nautical miles from the Datça peninsula. Although, its tourist area is small, its stunning port is a favorite amongst European yachters because of the spectacular views of candy-colored neoclassical houses set on levels crowning the island. This island is a favorite amongst those serviced by boat from Turkey, however they are limited, so it's sort of a now or never opportunity, because services will stop at the end of September. In addition to Symi, the "Flying Poseidon" will also be servicing Rhodes, with options to go direct departing Datça at 5 p.m. and departing Rhodes at 8:30 a.m. on Saturdays and Mondays.

Rhodes, the largest of the Dodecanese islands, laden with beach resorts and ancient ruins from the crusades is also an appealing vacation spot worth spending a few days in and is also regularly serviced by Turkey's spectacular summer vacation destinations Marmaris and Fethiye. There are hour-long catamarans daily from Marmaris to Rhodes and back and a ferry runs between Fethiye and Rhodes and back approximately 10 times a week, which takes an hour and 30 minutes.

Kos ferries are back on track but have changed location

Boat services from Bodrum to Kos, one of the longest standing and most regular running routes for boat transportation to Greece, which the expansive expat community and visitors to the mega popular Turkish summer destination take wide advantage of year-round for daytrips, had to come to a halt following the 6.7 earthquake that rattled the island causing damage and two deaths on July 20. Within five days, services had resumed, however they now need to dock at Kefalos Port, a location a 10-minute walk right of the previous harbor jetty. Nonetheless, there is a wide range of daily boat options, departing from Bodrum center and Turgutreis, the fastest being the hydrofoil, which sets out from the new cruise port in Bodrum center and takes approximately 20 minutes. Keep in mind this one is for passengers only and if you want to bring along your car, then you need to check the services offered from the port near Bodrum's castle, which take an hour from Turgutreis.

From Turgutreis to Leros and Kalymnos

Turgutreis, the second largest town on the Bodrum peninsula also offers services to Leros and Kalymnos in addition to Kos. You can travel from Turgutreis to Leros, another picturesque and well-loved island, in just two hours on ferry services offered Tuesdays, Fridays and Sundays departing at 10 a.m. and returning at 5:30 p.m. From Turgutreis you can also take a catamaran to Kalymnos, an island in the Dodecanese favored for its dramatic mountain ranges, which draw in rock climb

ers from around the world. Perhaps the greenest of the islands neighboring Turkey, making its nature reason enough to visit, is a 35-minute catamaran journey away that connects Kalymnos with Turgutreis and takes off from Turgutreis at 9:30 a.m. and returns at 5:30 p.m. Thursdays and Sundays.

Chios, Samos and Lesvos from Kuşadası, Çeşme and Ayvalık

Heading north of Bodrum, Chios, the closest of the islands to Turkey's coast, is an easy day trip from Çeşme, one of Turkey's most popular summertime destinations for the elite and the paparazzi that follow them. While Chios is notably less exciting than its Turkish neighbor, it is still an island worth visiting even if it be just a daytrip. There are two different boats that connect the two that run nearly 10 times a week each, one taking just 20 minutes and the other slower at 45 minutes.

From Kuşadası to the island of Samos there are ferries that arrive to either the Pythagoria or Vathi ports, there are hour-long ferries that set out at 9 a.m. every day of the week and return at 6 p.m. Samos is perhaps the most-laid back and relaxing to visit amongst the northeastern Aegean islands. Samos is a worthy destination to take time out on after visiting Kuşadası, another popular summer tourist destination in Turkey, which is also conveniently situated in the close vicinity of Ephesus and the miraculous ancient sites housed in Selçuk.

Meanwhile, from Ayvalık, there are multiple ferries that run to the island of Midilli, aka Lesvos, which take an hour and a half and operate Monday through Thursday departing Ayvalık and returning from Midilli on Mondays thru Wednesdays.