How and where to celebrate Christmas in Istanbul 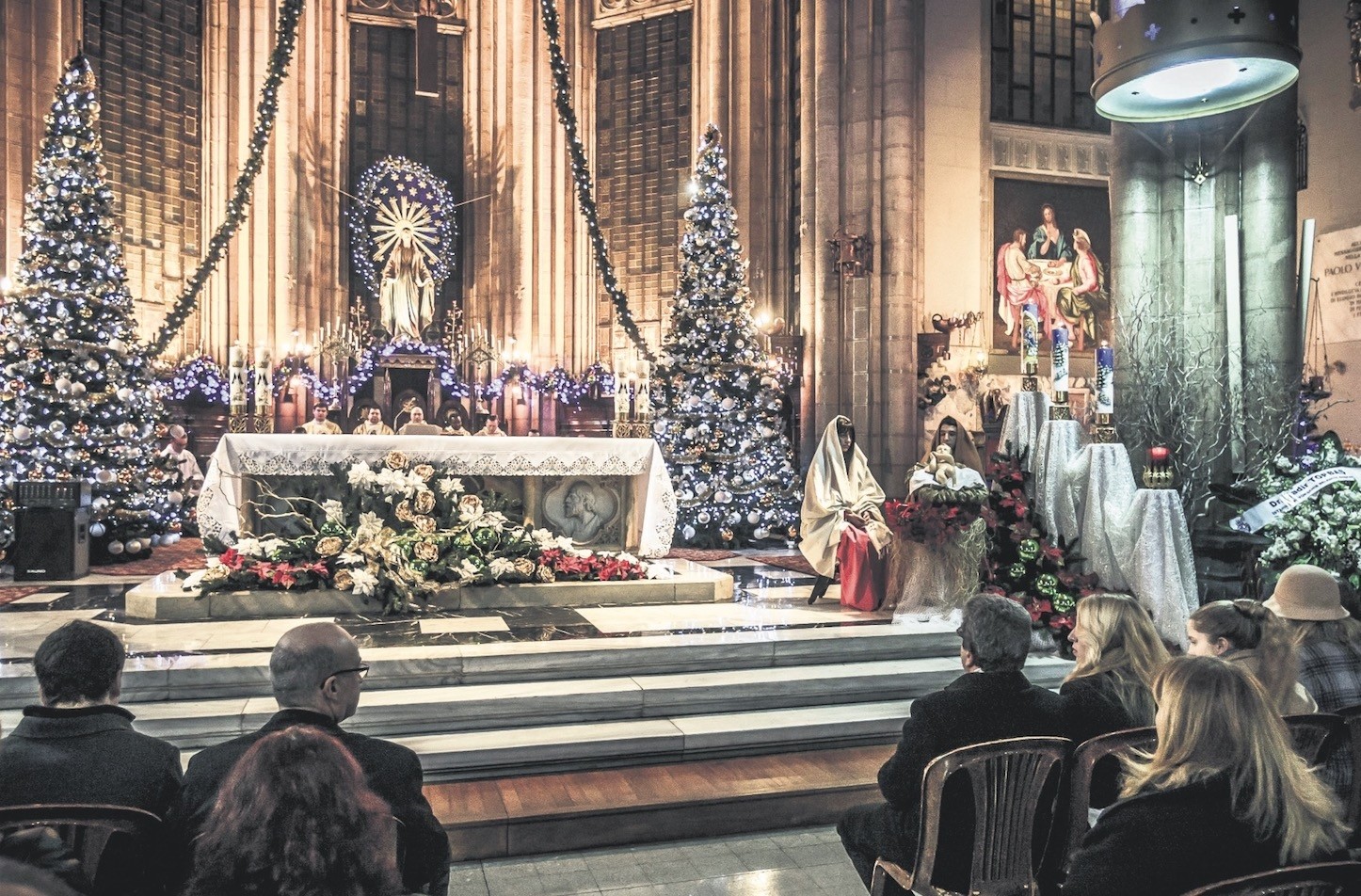 From luxurious hotels to historic churches, various venues in Istanbul open their doors to celebrate the Christmas holiday

Istanbul offers a number of festive options to celebrate the Christmas holiday ranging from traditional feasts to elaborate buffets served up by the city's landmark hotels or attending a church service at one of the city's historical and magnificent places of worship.

Where to get turkey in Turkey: Christmas feasts at luxurious hotels

The Bosphorus Terrace Restaurant at the Hilton Istanbul Bosphorus in Harbiye will be hosting specially-themed buffets for both Christmas Eve Dinner and Christmas Day Brunch. This legendary terrace has become a traditional go-to for many foreigners to celebrate the holidays. The Christmas dinner buffet will take place from 7 p.m. to midnight on Sunday, Dec. 24 and also includes the option of a set five-course menu both for the price of TL 215 ($56). There will also be activities such as face-painting and balloon-making for the kids. Then on Monday, Dec. 25, the Bosphorus Terrace Restaurant will also be hosting a Christmas Day Brunch Buffet with stations devoted to roasted turkey and the works as well as döner, so there is something for everyone while accompanied by classical music that will be held from noon to 3 p.m. and costs TL 195 per person.

The Conrad Istanbul Hotel in Beşiktaş will be hosting a traditional Christmas Eve Dinner on Sunday, Dec. 24 from 7 p.m. to 11 p.m. at the Manzara Restaurant. There will be carols and festive decorations as well as spectacular views of Sultanahmet and the cost is TL 230 per person. Then on Monday, Dec. 25 the Conrad will also be hosting a Christmas Day Brunch Buffet accompanied by a live piano performance for TL 175 per person.

Located in Levent, Mövenpick Hotel Istanbul will also be preparing a sumptuous brunch on Christmas Eve, Sunday Dec. 24 that will be accompanied by live piano music as well as a variety of activities for the kids. Held as AzzuR Restaurant, this distinctive Christmas Brunch prepared by Executive Chef Giovanni Terracciano will also have Italian specialties such as homemade pastas and pizzas in addition to the traditional turkey roast. The cost to attend is TL 140 per person, however, Mövenpick also offers the option of ordering a specially prepared turkey brought to your door.

Being the epitome of history, Istanbul's legacy of churches is admittedly too countless to compile a complete list of, however, the following are a number of its oldest, most spectacular and most frequented for their services at special times such as the Christmas holiday.

Referred to as Sent Antuan in Turkish, the Church of St. Anthony of Padua is Istanbul's largest Roman Catholic Church that was first built in 1725 by the Italian community and is situated off a courtyard overlooking İstiklal Avenue. The most popular church to visit on Christmas Eve, there will be a special service held on Sunday, Dec. 24 at 9 p.m.

First established by Franciscan Friars in a chapel in Galata in 1584, the Church of Saint Mary Draperis, or Meryem Ana Kilisesi as it is referred to in Turkish, is thus one of the most ancient Roman Catholic parishes of Istanbul. Its heyday came after it moved to its present location in İstiklal's TomTom neighborhood in 1769 and was the city's most popular church throughout the 19th century.

The Cathedral of the Holy Spirit is an impressive baroque-style Catholic cathedral built in 1846 by the Fossati brothers. Located near the Hilton in Harbiye, this is one of Istanbul's principal Catholic churches and the second largest Roman Catholic Church in the city. There will be a number of services this holiday weekend with morning masses at 10 a.m. in English held on both Sunday and Monday and at 11:15 a.m., there will be services in French. On Sunday, Dec. 24, the Cathedral of the Holy Spirit will also be hosting a Christmas Carol Concert starting at 11 a.m., which will be followed by a tradition midnight mass, held in a medley of languages including English, French, Italian and Turkish.

The Hagia Triada Church, also known as the Holy Trinity Church and as Aya Triada Rum Ortodoks Kilisesi in Turkish, is considered to be the largest Greek Orthodox shrine in Istanbul today. Built in 1880, this statuesque church, located just behind Taksim Square, was the first domed Christian church built in Istanbul and was designed by Ottoman Greek architect P. Kampanaki and also houses paintings by Sakellarios Megaklis and marble works by sculptor Alexandros Krikelis. On Sunday, Dec. 24, there will be a mass held in Greek that will start at 9 p.m.

On the Asian side: There are two churches located in the Moda neighborhood of Kadıköy that also hold masses for Christmas, which are frequented by the expat community that reside in this popular area, namely the All Saints Church, a gothic Anglican Church that was built in 1878 by the English merchant Sir James William, located in Kadıköy's Moda district and Notre-Dame de l'Assomption, a Catholic church, which was built in 1865 by Italian architect Giovanni Barberini.