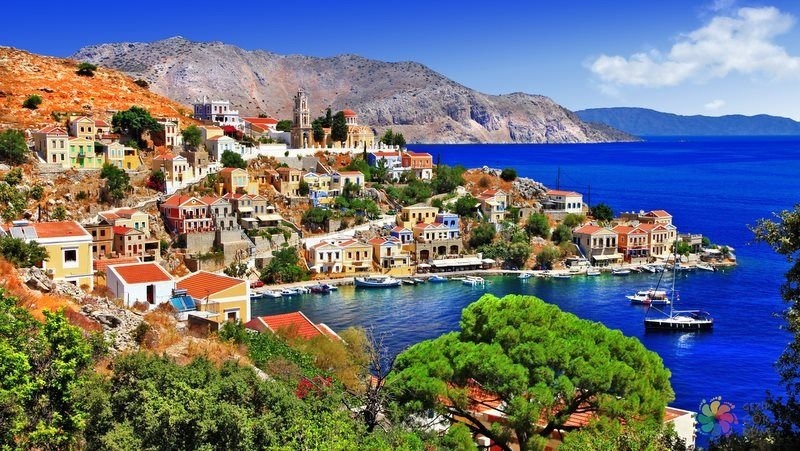 A lesser known fact may be that a number of attractive Greek Aegean islands just happen to lie mere kilometers off Turkey's shore. Why not combine a vacation this summer with a trip to Greece on one of the many routes served from Turkey's popular holiday destinations along the Aegean

Greece has a number of islands in the Dodecanese and North Aegean island clusters that neighbor Turkey's western coast and in summer, these are regularly serviced by ferries and hydrofoils making for an easy getaway and entertaining holiday. Just hop on a ferry from a number of Turkey's most popular summer destinations and you can easily find yourself vacationing on a Greek island. So, why not plan a trip this summer combining some of the best spots in Turkey with an island adventure in Greece.

Bodrum has long been the best gateway for accessing Greece by ferry and operates a regular ferry schedule year-round to the neighboring island of Kos. In summer, the services multiply however, and Bodrum's center will be servicing the islands of Rhodes, Kalymnos, Leros, Patmos, Samos and even Symi as well as Kos. Many of these destinations are also serviced by ferries that depart from Turgutreis, which is yet another departure spot near the Bodrum peninsula.

Bodrum to the nearby islands 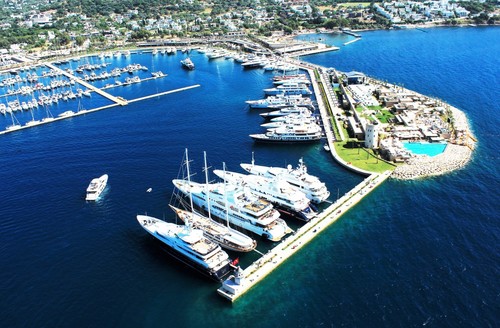 The Bodrum-Kos route is easily one of the most frequently used, with boats departing daily from Bodrum at around 9:30 a.m. and returning from Kos at 5 p.m. and the trip lasting approximately 45 minutes each way. Alternatively, departing at 9:15 a.m. every day, there is also a 20-minute catamaran ferry available that returns from Kos at 5 p.m.

Starting on June 11 every Monday this summer, there will be ferries departing from Bodrum at 8:45 a.m. that will take travelers to Rhodes. The trip is one of the longer ones at nearly two and a half hours and the return is also on Mondays at 5:30 p.m.

As of mid-June, the Greek island of Kalymnos will also be served by hour-long ferries departing from Bodrum every Tuesday at 8:45 a.m. and returning on the same day at 6:30 p.m.

Starting in the first week of June, there will be boats departing and returning from Bodrum to Leros every Thursday that will take place throughout the summer. This one-and-a-half hour catamaran ride will depart at 10 a.m. arriving at 11:30 a.m. and will return on the same day departing Leros at 6 p.m. to arrive in Bodrum at 7:30 p.m.Bodrum to Samos ferries will take place on Saturdays this summer and will start operating on June 16, departing at 8:45 a.m. and returning at 5:30 p.m. for the two-hour ride each way.

On Sundays, starting June 17, Bodrum will also be servicing the island of Patmos with a two-hour catamaran ferry that will depart at 8:45 a.m. and return the same day at 5:30 p.m.

Meanwhile, boats from Bodrum to Symi will depart twice weekly this summer starting on Wednesday, June 6 at 8:45 a.m. and returning at 5:30 p.m. with regular services to be offered on Wednesday and Fridays through October.

One of the closest points to the neighboring island of Kos, the marina in Turgutreis will also be offering daily departures to Kos as of June 1 and will depart every day at 9:15 am and return at 6:15 p.m. with a short 20-minute ride.From June 26 until late July, regular ferry services will also begin from Turgutreis to Kalymnos that will depart on Wednesdays at 11:30 a.m. and return at 4 p.m. for what is a 40-minute journey.Following the election, there will also be regular boat trips from Turgutreis to Leros that will depart on Mondays, starting June 25 at 11:30 a.m. and returning the same day at 3:30 p.m.

As of May 24, there will daily services offered between Marmaris and Rhodes that depart at both 9 a.m. and 5 p.m. on most days. A rare opportunity to depart Turkey's shore in the afternoon, return services from Rhodes to Marmaris also take place daily with most days even offering double services at 9 a.m. and 5 p.m.

There are ferries that head from Fethıye to Rhodes that take off and return five days a week with the exception of Sundays and Tuesdays. Departure times are 9 a.m. from Turkey and 4:30 p.m. from Greece.

From the popular summer holiday town of Kaş, there are also 20-minute ferries that head to the island of Meis, leaving at 10 a.m. and returning at 4 p.m., that operate daily.

Kuşadası is another popular summer destination that doubles as being the closest sea to the historical ruins of Ephesus. In addition, from Kusadasi one can easily visit the Greek island of Samos with hour-long ferry rides that depart daily at 9 a.m. and return at 6 p.m.

Another popularly frequented route that has multiple ferryboats departing and returning daily is from the chic summer holiday spot Çeşme to Chios, referred to in Turkish as Sakız Adası in reference to the mastic forests it is famed for. Services depart Çeşme daily at 9 a.m. and at 6:30 p.m. and return at 8 a.m., 5:30 p.m. and 6 p.m. on a rotating schedule.

There are daily one-and-a-half-hour services from Ayvalik to Midilli that depart at 9 a.m. and 6 p.m. returning from the Lesvos capital at 9 a.m., 6 p.m. and 7:30 p.m. on alternating days.