Sailing off on a Blue Cruise on the Turquoise Coast 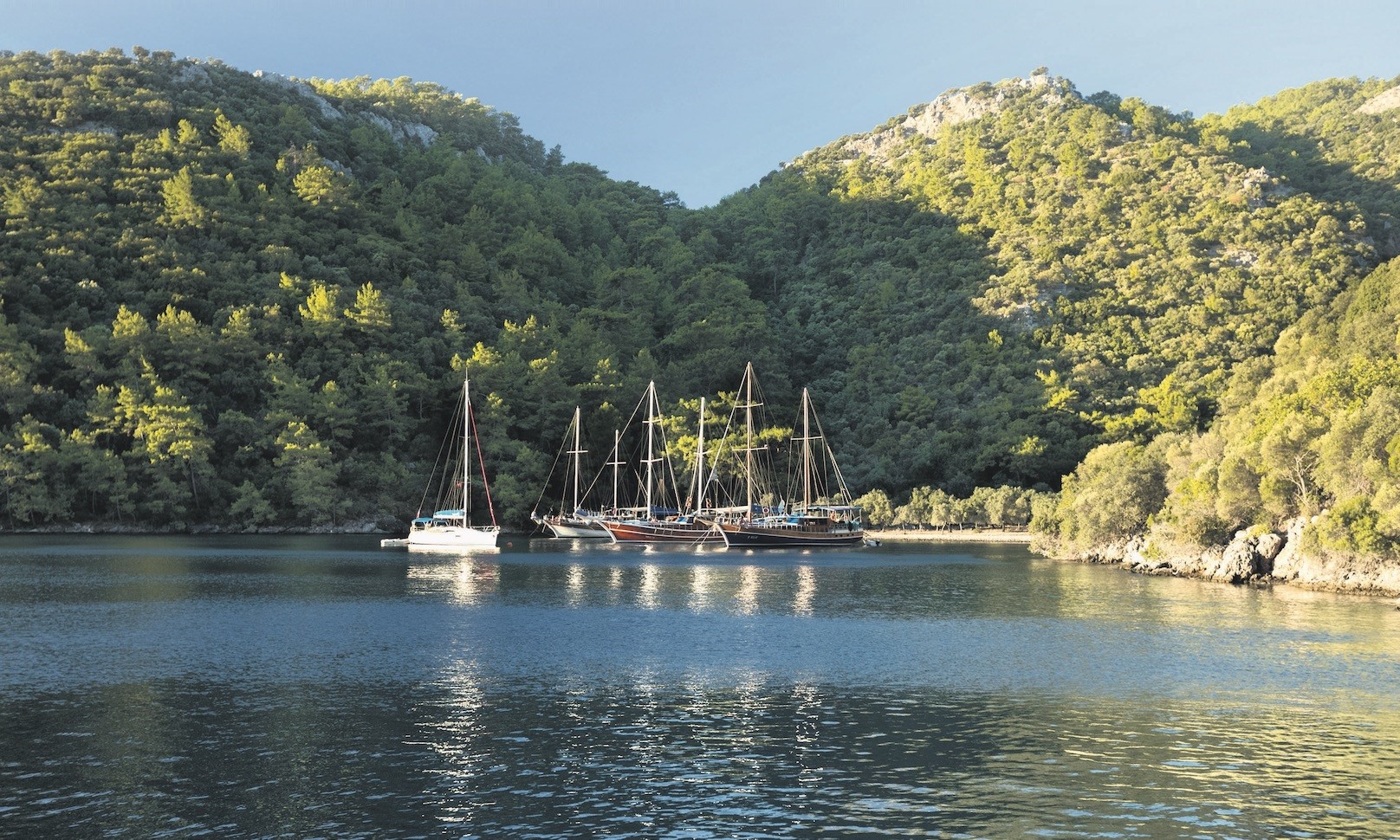 Undoubtedly one of the most spectacular things to do during your time in Turkey is to take a Blue Cruise along Turkey's southern coast where the Aegean and Mediterranean Seas meet, aptly dubbed the Turquoise Coast

What makes the Blue Cruise such a great experience is that it takes place aboard a wooden ship, called a gulet, which is unique to the southwestern coast of Turkey. These large wooden two to three-mast vessels are especially built to comfortably accommodate guests with a number of luxuries while sailing from one spectacular destination to another.

Gulets are generally approximately 20 meters in length and nearly half that in width allowing for ample foot space in which there is a seating area with a large table, sunbathing areas and many a times even a hammock hanging off the end of the boat. The cabins are en suite and equipped with air conditioning. The crew prepares delicious and healthy traditional meals throughout the day and the captain takes guests from one stunning cove to the next, each with their own significance, with pristine and uninhabited bays or enriched with history spanning back to ancient civilizations.

The experience of being on a boat and in the sea for days on end is already an unparalleled relaxing and invigorating excursion and couple that with the spectacular places, these tours visit along Turkey's impressive coast and it becomes a once-in-a lifetime experience. This experience is not as out of touch as you might think however. Depending on which boat you choose, the route and the number of guests on the boat, the cost can be as low as 50 to 100 euros a day. You can also rent a cabin in a boat shared with other guests in which you also get the opportunity to meet new people along your journey and there are also a number of boat tours that combine yoga into the trip.

The Blue Cruise season generally begins in May and lasts through October, thus one of the best times to go on this journey is when the summer comes to a close and temperatures drop a little. Spending time aboard a boat is a unique luxury as you get to swim in beautiful coves from the very moment you wake up, sunbathe to your heart's desire, relax by reading and even play games such as the Turks' beloved backgammon, or tavla, and enjoy fresh and delicious traditional Turkish home cooking.

Into the blue: Oh the places you'll go!

Turkey's entire Turquoise Coast, where the Aegean meets the Mediterranean Sea, is truly spectacular as there are so many wonderful places to visit, making it hard to narrow it down to where sailing on a gullet is best. Spanning from Bodrum to Antalya if one wanted to make every stop along the Turquoise Coast it would probably take at least a month and therefore Blue Cruises, generally lasting much shorter, end up breaking down the coast line into four-day to week-long tours. As there are a vast number of routes you can take aboard a Blue Cruise, the most important factor is deciding which one is right for you.

"Will you be sailing from one location to another destination or would you like to return to where you set sail from" is one of the most important questions you need to ask yourself, as well as, "how long do you plan to be at sea?"

Depending on how long you plan to sail, you can board in one spot and disembark at another or sail back to your original destination. Most itineraries

take approximately four days from one point to the other or a week to return, but they can be shortened and lengthened as desired.

The following are some of the best routes to take on a Blue Cruise:

One of the most popular routes as well as one of the shortest options is a Blue Cruise from Bodrum to Gökova, which tracks the southern face of the Bodrum peninsula to Gökova an area famed for its sea just north of Marmaris and next to Akyaka. This route includes stops such as Orak Island, Çökertme, Yedi Adalar, Sedir Island and the ruins of Alakışlabükü and also the Knidos ruins at the westernmost point of Datça.

If you want to delve deeper Bodrum to Hisarönü, which is just shy of Marmaris, this route stops at Datça's famous Palamutbükü beach, Aktur, Bencik Koyu and Selimiye a beautiful town and tourist destination. But visiting Bozburun, a sailor's haven and where gulets are also made is truly a privilege. Some of Turkey's most exclusive summer retreats are here and some only accessible by the sea.

The route from Marmaris to Datça is also a beloved one as you pass through beautiful Bozburun and visit Hisarönü as well as the ancient Knidos site in Datça and stop in bays such as Kargı, Kocaada and Kızılada.

Fethiye to Marmaris takes you through Göcek's spectacular coves such as Ekincik Körfezi and Akvaryum Koyu and in Dalyan you take a boat tour of the ancient city of Kaunus and the Carian tombs carved into the cliffs.

The route from Göcek to Kaş, which combines two popular summer holiday towns, is also one of the most favorite itineraries for Blue Cruises. The cruise starts off in Göcek and visits Gemiler Island, the picturesque bay of Ölüdeniz and camping and glamping havens Butterfly Valley and Kabak Valley. The stretch past Yedi Burunlar can be tough in rough weather and the stops more highly populated due to the high demand for this route, which also makes a stop in Kalkan on the way to Kaş.

Kaş to Kalkan and Kekova

This tour, which is also a favorite, is centered around Kaş, heading east and west to Kalkan and Kekova, respectively. Highlights include the ancient ruins of the sunken city in Kekova, the pirate cave in Gökkaya Bay and the medieval castle in Kaleköy, which was once Simena and also has ancient Lycian tombs, some standing in the sea themselves. Other stops include Güvercin Adası, On İki Adalar, Tersane Koyu, which has Byzantine ruins, and Üçağız, which also boasts ruins of the ancient city Theimussa.

This even more epic tour starts off from Kaş and heads to Akvaryum Koyu and then Tersane Koyu, which has Byzantine ruins, it also stops off at Demre where passengers can tour the Byzantine church devoted to St. Nicholas, the man we all know as Santa Claus, who came from this region. The tour then goes to Finike and Ceneviz Liman and then heads to Kemer and Adrasan Koyu famed for its two- kilometer long beach. This Blue Cruise also heads to Olympos, home of the loggerhead turtles and Mount Chimera, on which an eternal flame blazes as well as Phaselis an ancient trading town built along the sea in the 7th century B.C. The cruise also visits the 12 islands across Meis, where there are underwater canyons and a historical shipwreck and from there they head to Güvercin Adasi for a chance to swim with the Caretta carettas. The trip concludes at Liman Ağzı, where there is a plane wreck and King Mausoleums from the Lycian era.