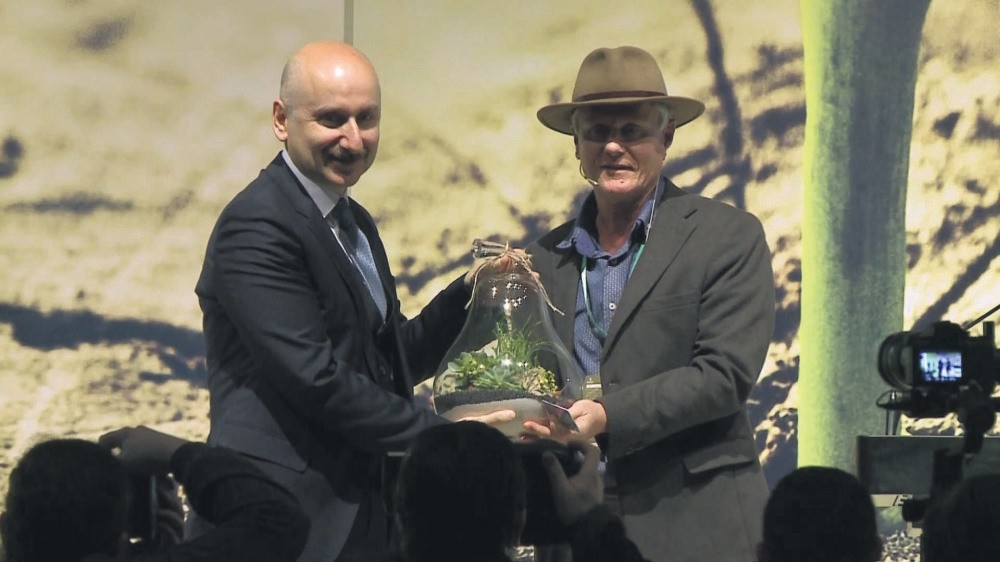 While he may be better-known by his moniker ‘Mick Amca' in Turkey, expat Mick Scarsbrook has played an influential role in raising awareness on the perils of littering and dumping rubbish in nature

That Turkey is a paradise, which thoughtlessness and unawareness of the damage of litter threatens to destroy, is the message Mick Amca (Uncle Mick) delivers in Turkish in his video that went viral titled "Türkiye Bir Cennet" ("Turkey is a Paradise"). "Utanmıyor musun?" ("Aren't you ashamed") he boldly asks in Turkish, while admitting that he personally is when he sees all the litter people leave behind in places that are precious. With over 40 million hits on his extremely entertaining, yet informative video – I literally laughed out loud, Mick Amca has become a household name for many, and his public information videos have been shared on television and in schools for being an encouraging example of how to not leave an everlasting footprint on nature.

In December, Mick Scarsbrook was even invited by Istanbul Municipality to be a speaker at the Istanbul International Environment Summit, a conference that took place with the attendance of first lady Emine Erdoğan, who has become a spokesperson for the zero waste movement in Turkey. This honor followed a speech at Pamukkale University in Denizli province and two awards by the Fethiye Municipality and the Mavi Dalga (Blue Wave) association in response to his conservation efforts. He is also the founder of Let's Keep Turkey Clean (Türkiye'yi Temiz Tutalım), an organization based in Fethiye that exerts efforts to help the environment and pick up trash.

I had the opportunity to catch up with Mick on the heel of his speech and find out more about the response to his videos and what he has planned next under his signature hat. Hailing from Britain, Mick Scarsbrook moved to Turkey in 1988 when he joined a friend who was a holiday rep for a week only to never return for 15 years. "I just didn't get on the plane," he tells me, recalling how he went on to work as a holiday rep in some of Turkey's most beautiful vacation destinations, including Marmaris, Bodrum and then Fethiye, where he has settled.

I asked Mick what inspired him to make the popular Turkish public information video "Turkey is a Paradise" to which he said that it was the noticeable change he saw over the decades since first moving here. He explained he used to hike a lot and climb the ancient ruins of Tlos and that decades ago, he would never see rubbish because Turks typically didn't shop for premade packaged goods. However, over time that changed and suddenly the popularity of single-use plastic wrapped snacks emerged and with it trash began to surface in forests and streams. Seeing restaurants dispose of their rubbish in the pristine Saklıkent Gorge was the last straw that made him feel like he had to get the message out that it is not okay to litter, he said, adding that he has also filmed a video about Saklıkent. However, it was his "Türkiye Bir Cennet" in Turkish that he made two and a half years ago in which he implores the Turkish public not to litter the country's beautiful nature that exploded by going viral, getting upward of 40 million hits and unofficially even being used in schools to teach about nature conservation. "The impact of it has been brilliant," says Mick, adding that he has been embraced by the Turkish public and is recognized and referred to as "Mick Amca" daily.

"If it had been the other way around," Mick points out, "In other words, a Turk talking about rubbish in England, this may not have been so well received; however, in Turkey it was just the opposite, and people loved to hear him rattle off in Turkish about what a shame it is that people litter in such a beautiful country. He received 70,000 comments when he first posted the video on Facebook, of which practically all were positive, he explained.

I used this opportunity to ask Mick how he thought Turkey was doing as a whole in their efforts for conservation compared to other countries such as Britain to which he said, "Turkey is working on it a lot faster than other countries." Telling me how he

was "gobsmacked" at the Istanbul International Environment Summit in December, of which he was also a guest speaker, Mick recalled how Istanbul Municipality showcased a boat they have that has collected nearly 20 tons of plastic rubbish from the sea and that they have 10 of these boats just around the coast of Istanbul; whereas there isn't anything of that kind in Britain yet. "They are really switched on," Mick said, adding: "They even have helicopters flying around Istanbul to locate where rubbish is. The fact that they are trying to do all of this in Turkey is brilliant. They aren't doing these things in Britain. All they have is a 5 pence charge on plastic bags, whereas in Turkey in addition to charging for plastic bags, they also have the plastic recycling machines where you can get transportation credit."

I asked Mick if he had any tips or suggestions for what else could be done to help conserve nature and he said that in countries such as Sweden, Norway and Germany, they have a deposit system in which a fee is charged for plastic and then refunded when said plastic is returned. Putting a deposit system in place and establishing a central waste disposal center where people could easily dispose of waste, such as building material, could also create change in both urban and rural areas, he added.

Mick has also filmed an entertaining travel series titled "Fethiye: The Jewel of Turkey" in which he shares advice on the attractions and sights in popular spots such as Çalış, Ölüdeniz and Tlos. He also has an entertaining Turkish language tips video series geared toward tourists in Turkey. In the future, Mick aims to produce travel videos in Turkish geared toward Turks of, for example, places off the beaten path in England. You can check out his fun videos on his YouTube channel Mick Scarsbrook.