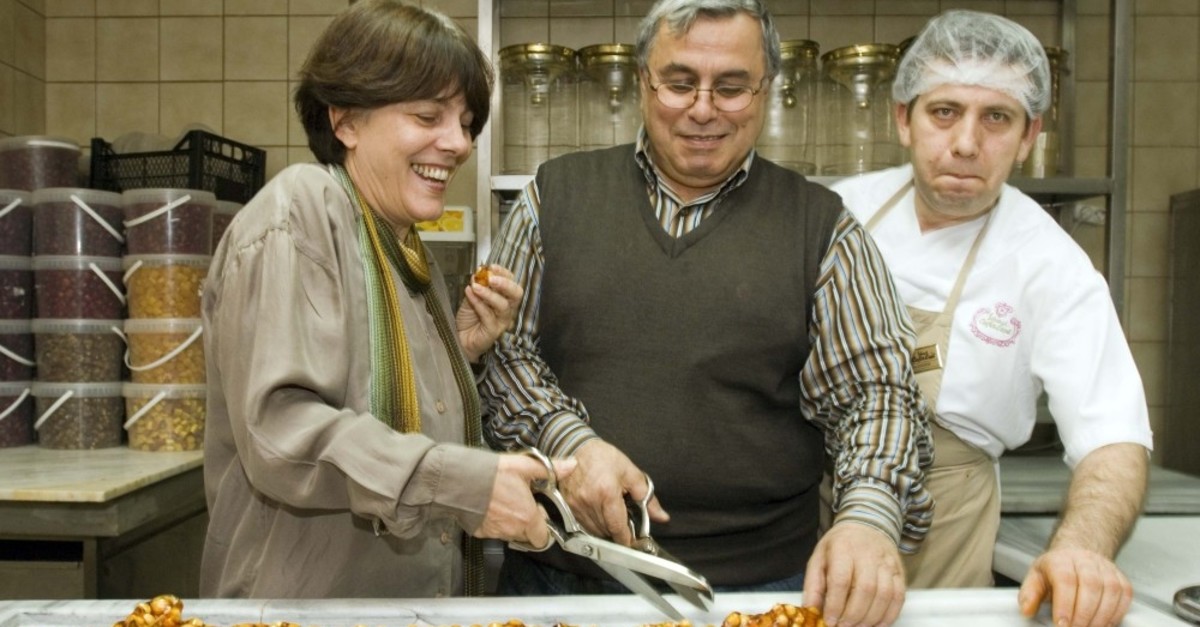 Food historian academic, author and prolific translator, British expat Priscilla Mary Işın has been sharing her knowledge on Ottoman and Turkish culinary traditions for decades now and through multiple books shedding light on the ever-present cultural significance of cuisine

For Turks and foreigners alike, and in Turkish and English, Priscilla Mary Işın has become the aficionado for all things involving Ottoman history and cuisine and has written multiple books in English and Turkish on the culinary traditions of this region.

Hailing from Nottingham, England, Mary Işın met her Turkish husband Yavuz while she was studying philosophy at York University and moved to Ankara as soon as she graduated in 1973. In 1980, they moved to Istanbul, where she has lived ever since, writing up a storm of wonderful nonfiction books on Turkish and Ottoman culinary history and becoming a specialist on the topic in Turkey and abroad.

Mary Işın has published three books in English and eight in Turkish, with her most recent being "Bountiful Empire: A History of Ottoman Cuisine," which was released last year and examines how the culinary traditions evolved in the over five centuries of Ottoman rule and explores culinary aspects such as etiquette, cooks, restaurants and food regulations.

Her book "Sherbet and Spice: The Complete Story of Turkish Sweets and Desserts" was released in 2013 and is the English version of "Gülbeşeker," which won the Dünya Kitap Gastronomic Book of the Year prize in 2009 and was released in its third revised edition in January of this year. Last year, Mary also released a translation into Turkish of the Fenn-i Tabahat, the last cookbook to come out of the Ottoman Empire and in addition to publishing an Ottoman culinary dictionary and a history of food from the era of hunting to the present of gourmet in Turkish, Mary has also written a dictionary on Anatolian bird names

I had the opportunity to catch up with Mary, whose impressive volume of work has always impressed me to ask how she first sparked an interest in Turkish and Ottoman culinary traditions. She said it started off with her actually wanting to prepare a Turkish cookery book, however, when she delved into researching the history for her introduction, she said it took her into a whole new world of intriguing culinary customs leading her to abandoning the cookery book to pursue researching topics such as food and table manners and how the food culture reflected Ottoman society, which thankfully, she has been enlightening us on.

Mary actually began working as a translator and has translated a prolific number of something like over 150 works, on topics such as history, art, archaeology and architecture, which she credits with helping enormously in teaching her a lot about Turkish culture and history. She would buy old cookery books in the Ottoman script and eventually learn on her own how to read them. "The first Ottoman cookery book I transcribed in full was published in 1998. It was a fascinating book written by an Ottoman infantry officer in 1898 for fellow officers who couldn't cook," she tells me. I asked Mary what some of her research processes are for writing books to which she said that she mainly reads historical books, articles and documents, as well as books about traditional cuisine in Turkey, "because many foods, dishes and customs still survive today," Mary said, adding, "I talk to a lot of people from all over Turkey. I visit ethnographic museums and I collect old food-related objects. There are interesting ethnographic museums all over Turkey,"

You see, Mary travels throughout Turkey considerably for her research, sometimes on her own and sometimes for conferences or with friends, but every time she meets fascinating people and learns a lot, she tells me.

"The first time I realized that traveling was important was when I visited Urfa in 2003 for a medical history conference. Medical historians are very interested in food because traditional medicine focused a lot on diet. At the university there we were given hot baklava with a cheese filling and I was extremely excited because I had read about Ottoman recipes for baklava filled with fresh cheese and served hot. A school teacher I met there gave me her recipe and from then on I tried to travel as much as possible," Mary shared.

I asked Mary what some of her most captivating experiences have been in her pursuit of knowledge on culinary and historical traditions in Turkey and she told me the story of how she managed to track down what may very possibly be the last horoz şekeri maker in Turkey. A kind of hollow lollipop in the shape of cockerels or other animals made in a mold, Mary had heard about these sweets and all of her Turkish friends could recall them, however chocolate bars had taken over and these lollipops were no longer popular with children. "Then, by chance, someone I met said she had seen a horoz şekeri seller in Bergama the previous summer, so I went there in 2007 and not knowing where to begin looking, I went to the Tourist Information Office. By an extraordinary coincidence the lady there had been to school with the horoz şekeri seller and told me which part of town he visited in the mornings. I could not find him, but I found his brother, who was a fireman, and he gave me the address and in the evening I visited his brother's house where I watched him and his wife make the lollipops to sell the next day," she recalled.

"Another captivating experience was watching an old lady and her friends make pişmaniye using honey instead of sugar in a mountain village near Alanya. I had read about this in a superb book about Alanya cuisine by a retired teacher called Haşim Yetkin and he kindly arranged to take me. This is a very old sweet going back to the middle ages. Perhaps no one will ever have the chance to see this again," Mary explained. Luckily, for decades now, Mary has been shedding light on these lost traditions for Turks in Turkish and in English for the rest of us.