Get ready for 'Bocuk Gecesi': The creepiest night of the year 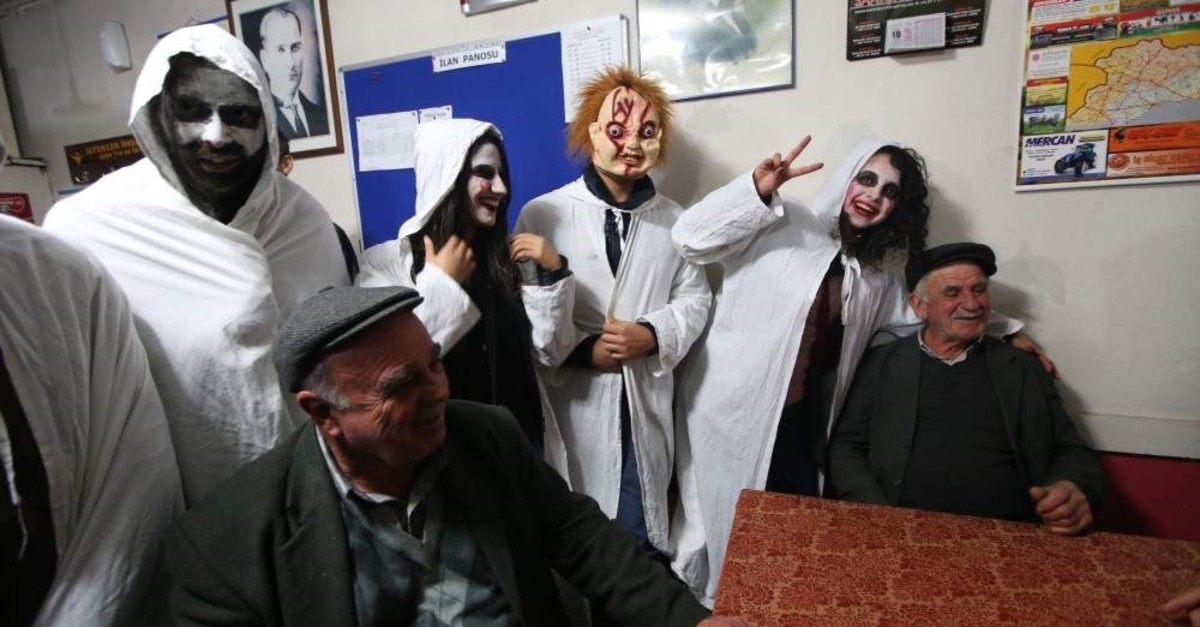 This Saturday, people from all over Turkey will be flocking to Edirne to mark winter's coldest and longest night and the ghosts that come out to haunt it in this medieval Thracian version of Halloween

Every year, a Thracian town in Edirne revives a medieval tradition to dress up as ghosts, donning white sheets and scary make-up to scare other members of the community in what is a truly bizarre, yet oh so familiar, celebration of the coldest night of the year called "Bocuk Gecesi."

Taking place since the Middle Ages in Çamlıca, which is a village in Edirne's district of Keşan; "Bocuk Gecesi" is a special nighttime celebration held on what is deemed the longest and coldest night of the year to commemorate the community's power of resistance against harsh climate conditions and to invoke the spirit of the "Bocuk" family of ghosts. Bocuk is a term used in the Thracian region to refer to the longest and thus harshest night of the year and thus, this annual celebration is referred to as "Bocuk Night." This year, that night has been determined as this Saturday, Jan. 18.

According to the medieval Balkan superstitions, this bizarre holiday has been derived from, on a special night there is believed to be a split in the universe in which all of the evil spirits are set free, the worst of which happens to be the "Bocuk" family. As in addition to referring to the coldest night of the year, the word "Bocuk" has also become the name for a series of imaginary witch-like ghost figures referred to as "Bocuk wife" (Bocuk karısı), "Bocuk mother" (Bocuk anası) and "Bocuk grandfather" (Bocuk dedesi), who are believed to be awakened on that night. According to legend, these witches wander through the night and go into people's barns to suckle from the mothers of newborn calves, which according to beliefs, would supposedly then render them unable to ever produce milk again. But it is certainly not all gloomy and grim, as supposedly there is a way to stave off the family of Bocuk ghosts and that is by preparing ample pumpkin dessert, which is considered to be a favorite for the Bocuk witches and thus every household will leave out a portion on the roof of their barns to ensure the Bocuk witches full up on pumpkin and no longer seek their calves' milk.

Other superstitions involve "Sedenka," which refers to having a sit-down with neighbors and is also a critical part of the celebration. According to beliefs, the Bocuk witches will climb on people's backs and drag them down into their demise due to the cold climate and freeze to death and thus, community members try to come together to create strength and resistance in unity and consume pumpkin dessert, as it is also believed that those who do so will be resistant to the Bocuk's destruction. For generations, therefore community members will gather together around a fire and will have a crepe-like treat referred to as "akıtma," boiled corn, oven-roasted peanuts and of course the obligatory pumpkin dessert to ward away any evil spirits. Because if not, the underlying belief is that the ecological balance of the world will be disrupted, such as cows drying up of milk, chickens stopping laying eggs and trees no longer bearing fruit. Another ritual and superstition surrounding this night is the belief that if water freezes overnight, then the year will be a bountiful one. And so, households will put planks of wood into water, which they leave out to see if it will freeze over.

All superstitions aside, this is a fun and festive event very much reminiscent of the Halloween holiday celebrated in the United States, whereas in this case local residents and visitors dress up as ghosts, donning white sheets and scary make-up. People traipse through the town yelling "Bocuk Geliyor!" which translates to "Bocuk is coming!" and everyone attempts to spook one another in an entertaining and light-hearted manner.

This year, the village of Çamlıca will be going all out to celebrate with the community and to welcome visitors on this special night. There will be a special route devised for the night, in which guides will take visitors through the streets, which will have been transformed into a sort of "haunted village." The Çamlıca Culture and Art House will be the center of the evening's activities where there will be a "Horror Museum," live musical performances and five different theatrical performances staged based on the region's mythology.

While last year, there were approximately 20,000 visitors to the township of Keşan, this year that number is expected to reach 25,000. In order to curb some of the traffic congestion experienced in previous years, there will be a designated route specified for entry and exit ways. As a result and due to the popular demand, this year there will also be a number of guided tours taking visitors to the region which may be of interest and admittedly more convenient.

Pronto Tour will be heading out from Istanbul, Vestur from Ankara and Oksijen Tour, which will take off from Bursa. Each have full day trip tours scheduled in which participants will get to discover the Tekirdağ region along the way after which they will dress up for the evening's festivities, enjoy Bocuk night in Keşan and will then return in the wee hours of the night on that very same evening.

Hellespont Tour will be heading out from the city of Çanakkale and taking visitors through Edirne during the day and to Keşan by night, while Kazdağı Tour will be offering a similar itinerary, picking up guests from stops in Çanakkale and Balıkesir such as Edremit and Altınoluk, while Tatildeyiz Tour will be picking up guests from Edirne and taking them through Keşan to discover the region before the night's fun festivities.
RELATED TOPICS