The Tirhandil Cup: The show goes on in Bodrum 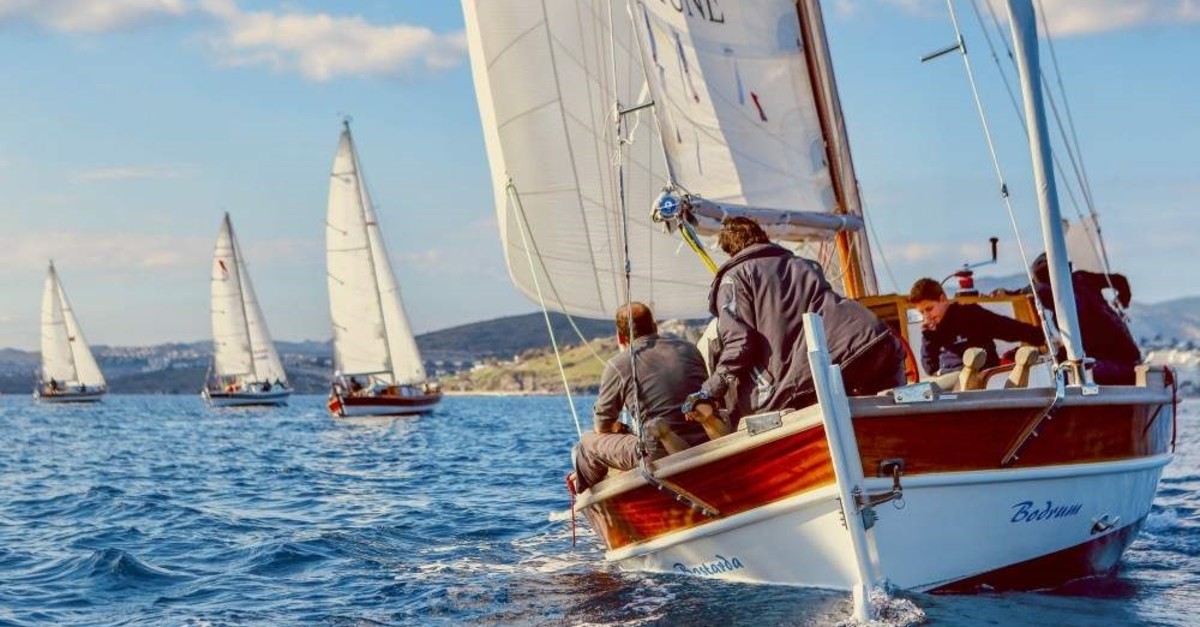 Produced by talented craftsman, the tirhandils mesmerize viewers while gliding the surface of the water. (Courtesy of codezeromedia)
by Leyla Yvonne Ergil Jan 27, 2020 4:39 pm

As the oldest style of vessel on the Aegean Sea, tirhandils continue to be treasured by experienced sailors and have even inspired their own cup for four years and counting in Bodrum

The Tirhandil Cup is a sailing competition that takes place in Bodrum for five months in the winter season, with some of the region's most experienced captains taking on the challenge to race in some of the country's most historic wooden sailboats.

The Tirhandil is a uniquely double-sided type of wooden boat that is quintessentially Aegean in character and prized by seafarers, who, throughout its history as one of the region's first working wooden sailboat, have considered it the most seaworthy vessel around. What makes the tirhandil special is that it has equal dimensions on both ends, in other words, both the front and back ends come together like the tip of a triangle, allowing for it to be more convenient to maneuver and sail; hence, it is ideal for fishing, sponge diving, transport and more. Known for being prevalent even in the pre-Ottoman era, over the decades, the tirhandil's shape has been adjusted to fit the times, becoming what we are now familiar with in southern Turkey as the gulet, which has a distinctive flat back end allowing for more internal cabin space to accommodate the blue cruises along the Turquoise coast these boats are now famed for.

While the tirhandil is, in essence, the gulet's predecessor, it is very much still treasured by the most experienced sailors in the Aegean region, who fawn over them, often building, refitting and collecting them as a passion project due to their seaworthiness and thus embark each year on an extensive race for the Tirhandil Cup.

Having disassociated from the Bodrum Cup to become a competition in its own right, this year the Tirhandil Cup is going into its fourth year and has never been more widely anticipated. This could also be in part due to the fact that it was an approximately 12-meter-long Hızır, a tirhandil style boat, that won the Bodrum Cup, the country's most prestigious sailing race event that takes place in October over the course of six days. During this time, the entire town celebrates the cup with events happening in the different regions the boats visit and just to give you an idea of the importance placed on this race, Turkey's legendary popstar Ajda Pekkan even performed at the closing show.

But alas, for the sailors from across the region and beyond, from the Bodrum Cup was spawned the Tirhandil Cup, a four-month competition consisting of six different races that started in December and will continue until April. While The Tirhandil Cup may be lesser known worldwide than the Bodrum Cup, it definitely holds its own significance for the experienced sailors and captains who take part, most of whom hail from Bodrum and use this opportunity to compete throughout the winter months on the ideal boats of their choosing, which for most just happen to be tirhandils.

I had the chance to catch up with Deniz Mutlu before he sets sail to compete in the fourth leg of the Tirhandil Cup, which will be taking place in Bodrum this weekend on Feb. 1-2. Deniz Mutlu was handed the title of president of the Tirhandil Cup this summer by his predecessor Erdem Ağan, who started the organization and is the son of Erol Ağan, whose Ağanlar shipyard is one of the most famous in Bodrum for wooden vessels and one of only a handful still painstakingly making and refitting the historical tirhandils. Deniz Mutlu is a captain and skipper who will also be competing in this weekend's race on the Bastarda, a boat built in 2013 at the Kıvırcık Shipyard, and cuts a youthful and dynamic figure with irresistible cool. This may be in part due to the fact that Deniz is actually half-Dutch and half-Turkish, having grown up in Bodrum with a revered captain father and a mother from Holland. When I asked him if he still traveled to Holland or had ever stayed there extensively, he said that growing up he would go for sailing lessons in the summers, but insists that he had never been confused about his heritage of being from Bodrum. "I am a Bodrumlu," he proudly announces, emphasizing that he has never felt otherwise.

Meanwhile, the race itself will see tirhandils spanning from 6-18 meters in length compete to make the best time, with the first leg on Dec. 7-8 and continuing through the winter months with the second leg held on Dec. 28-29, the third on Jan. 11-12 and now the fourth leg will take place this weekend Feb. 1-2. Rounding up the full six-leg schedule will be the fifth leg to be held from March 14-15 and the final leg, which will take place on April 18-19. The races begin with a briefing, which will take place on Saturday, Feb. 1 at 11 a.m., followed by a race that starts at noon. Each leg of the race follows a different course varying between 10-16 nautical miles and looping around some of the nearby islands to Bodrum center such as the Karaada and Çelebi islands. Spectators will be able to see these magnificent wooden boats, challenging one another for speed from spots around the peninsula; however, Deniz tells me that Bodrum's Kumbahçe neighborhood offers some of the best vantage points. On the first evening of each leg, an awards ceremony is held in which the winners of the previous leg are awarded a trophy and a celebration that generally takes place at Café Pi in Bodrum center, which has become a popular hangout for Bodrum locals in the winter months. Last month also saw the screening of a brand new short documentary on the Tirhandil Cup and the sailors and boatmakers behind it shot by local filmmakers Bodrumlokal.

For the love of the sea: weekly Maritime talks in Bodrum

Luckily for boat enthusiasts, sea-lovers and history buffs, this winter there will be a series of talks every Wednesday evening starting at 6 p.m. at the Bodrum Maritime Museum. Referred to as "Maritime Meetings," or in Turkish "Denizcilik Buluşmaları," these are a series of talks on topics ranging from the history of caique boats last month to discussing the use of astronomy and astrology in sea navigation, the latter of which are the topics that will be discussed this Wednesday, Jan. 28 and the following week on Feb. 5.
RELATED TOPICS