The top 10 places to make a wish in Istanbul 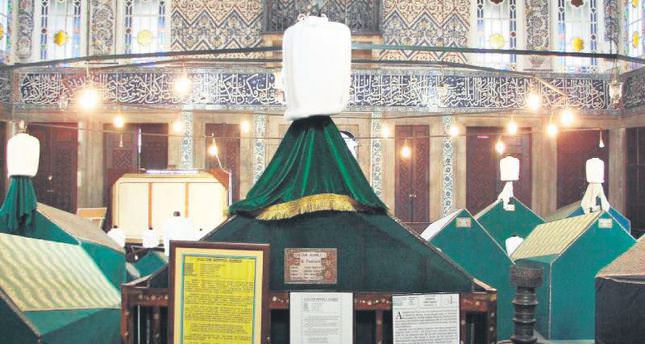 by Leyla Yvonne Ergil May 10, 2014 12:00 am
Having finished celebrating Hıdrellez and Saint George's Day, special days that usher in the spring and celebrate saints known for granting wishes, I thought it an opportune time to acknowledge the vast number of sacred sites in Istanbul that have become established wish-making centers.

Although most of these locations are tourist staples, visitors to wishing spots are certainly not limited to foreigners, historians or the pious. The wish-granting properties attributed to these locations have made them significant beyond measure and they are therefore open to and frequented by people from all walks of life. The following is a list - in no particular order - of some of the most intriguing methods to make a wish and the most picturesque locations from which to wish for your heart's desires.

The Eyüp Sultan Tomb is certainly one of the most historically significant destinations in Istanbul where people flock to in times of need or for prayer. A close companion of the Prophet Muhammad, Eyüp Sultan died just outside of the city walls in the first Arab siege in the seventh century. Following the Conquest of Istanbul in 1453 and based on a vision by his companion, Sultan Mehmet II located Eyüp Sultan's grave and built a memorial there in his honor. Not only was this to become the first mosque built in Constantinople by the Ottoman Turks, it also became the historical neighborhood we know today as Eyüp.

The tomb itself, which also houses the Prophet's footprint, has become an important destination for wishmakers.

In addition to praying at Eyüp's tomb, people attach colorful strings to tree branches to signify wishes made. Eyüp Sultan's tomb is the single most significant Islamic shrine in Istanbul and ranks fourth for Muslims after Mecca, Medina and Jerusalem. Located above the Golden Horn just outside the city walls, the complex also includes one of the oldest and largest Muslim cemeteries, which houses the graves of Ottoman sultans, high-ranking military and court officials, intellectuals, poets and artists who wanted to be buried at this sacred site. The picturesque Pierre Loti Café is also located in this district and you can access it by a cable car that runs between the mosque and the coffee house.

Yet another highly popular destination in the art of wish-making is Telli Baba, considered to be the ultimate site for those seeking a partner in marriage. Telli Baba is a tomb located on a hillside overlooking the Bosporus in the Rumelikavağı district on the European side of the city. According to tradition, those looking to get married come to Telli Baba to pray for the perfect partner by taking with them a few strands of silver tinsel left by those whose wishes have been granted.

Ac c o r d i n g to Christian belief, those who make the nearly 1,000-meter uphill trek to Aya Yorgi Church, which dates back to the sixth century and sits perched upon the top of a hill on Büyükada island, are considered to have completed a half pilgrimage. Although thousands come out for Saint George's Day, the tradition of tying a colored string around a tree and allowing the ball of yarn to unravel as you walk up the hill to the church, now continues year-round. The saying goes that those whose thread reaches the end of the pathway will have their wishes granted.

Located in Beykoz with a commandeering view of the Bosporus from the Asian shore, Joshua's Hill (Yuşa Tepesi) is a shrine containing a mosque and a tomb dedicated to Saint Joseph (Hazreti Yuşa). Locals believe the grave is sacred and they pay visits in order to be healed from their illnesses.

The Tuzbaba Türbesi is a tomb dedicated to Sultan Mehmet's "salt master," who was commissioned with the crucial task of adding salt to the palatial cuisine. It is located in a 500-year-old building in the central European district of Beşiktaş and continues to serve as a special spot for miracle-seekers. The tradition with this particular tomb is to bring packets of salt that are then left out on the windowsills for visitors and passersby to ingest in the hopes of ensuring their wishes come true.

Another special tomb located off Beşiktaş' Çırağan Avenue is the Yahya Efendi Türbesi. It was once a stop for mariners seeking safety over the seas but is now a stop for anyone who has a wish to make. Considered to be almost a brother to Süleyman the Magnificent, Yahya Efendi's tomb was built by famous architect Mimar Sinan. Today, the money collected from donations and coins given in exchange for wishes is used to provide educational scholarships to students. Legend has it that if you rub your thumb inside a hole in the Weeping Column dedicated to Saint Gregory the miracle worker in the Hagia Sophia and it comes out moist, then you will be cured of all your ailments. The marble pillar, which originated in the pagan temple of Artemis in Ephesus, contains a hole said to emit moisture, hence its name. According to legend, visitors are supposed to stick their finger in the hole and attempt to rotate it clockwise 360 degrees and only then will their wishes come true.

There is also a Wish Pool located inside the Basilica Cistern (Yerebatan Sarnıcı), an ancient underground waterway that lies beneath Sultanahmet Square and dates back to the fourth century. Coins are meant to be dropped next to a giant column with an engraved design reminiscent of tears.

On the first day of each month, people from all faiths flock to the Ayın Biri Church (The First Day of the Month Church), where they purchase silver or gold keys or other charms to represent their deepest wishes and then rub these charms against the various icons on the church grounds.

The Aya Ekaterini is a tiny shrine dedicated to Saint Catherin located in the basement of a fish restaurant in the popular seaside neighborhood of Moda. According to legend, this ancient shrine is situated on a natural spring (ayazma) considered to be holy. This quaint church, which has been active since the 1930s, is located within a well-known fish restaurant, which one must literally enter to access the small flight of stairs that lead to the shrine. Make a wish by lighting a candle and touching the holy water in this very special church. Once upon a time my mother did just that, which may very well be the reason I am here writing this for you today.