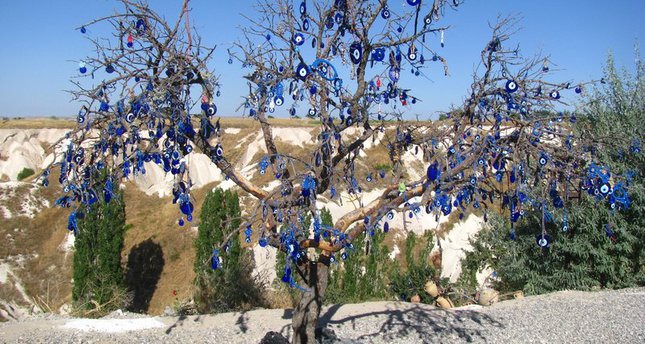 It should come as no surprise that Turkey has a number of creative superstitious beliefs. After all, this is the country of the evil eye beads that protect against the infamous malevolent gaze

In Turkey, the vast number and array of rituals, traditions and premonitions given to symbolism, myths and taboos are indeed astounding. I try to pay respect and heed to these intriguing beliefs, in the hopes, or in some case fear, they may indeed come true. The following are a variety of certain beliefs and practices any foreigner in Turkey may want to be aware of or even adopt as a guideline to do as the Turks do!

Turks believe in the evil eye and in donning a "nazar" (the evil eye bead) to protect against the elusive malevolent gaze. If should you fall prey to such a curse, you can don a "muska" – an amulet containing a prayer – to protect against this envious glare. However, should you truly want to change your negative fate caused by such an evil spell, then you need to call upon a lead melting specialist – generally in the form of a female villager – to melt lead over you and then drop it into cold water to shape your own personal talisman.

Turks believe that most everything should be done or at least started with the right hand or right foot because the left side is considered a sign of bad luck. Therefore, they quite literally like to start their days off "right" by always getting out of bed from the right side. Many Turks will take care to step into their home or place of business with their right foot first, they shake hands with their right hand and even begin washing their hands using their right hand first, all to ensure they have the best luck possible. There is also the belief that if your right palm itches you may be getting good fortune, as in money, yet if your left palm itches then you may soon be losing money. If you get a twitch in your left eye, it is considered a premonition of bad news, while a twitch in your right eye, is believed to be the direct opposite.

There is a wide range of symbolism and signs considered to be forewarnings of an impending fate. For instance, if the bottom of your feet itch, you may soon be taking a trip. The same is true if you happen to see a stork flying overhead. If you see a jaybird then you should be on the receiving end of good news. Should you find yourself staring into space, don't be surprised if someone comes to visit you from afar or if you have to suddenly take a long-distance trip. If your ears are ringing, you can be near certain that someone is talking about you at that very precise moment. However, if food gets stuck in your throat, then that means that a fellow friend is going hungry somewhere.

You have probably heard the superstition that if a black cat crosses your path you will have bad luck; well, Turks may even reverse their path entirely if they see a black cat, and to some if a snake crosses your path, it's a sign of good luck. If a dog howls at night, this could be the sign of impending doom; however, do not worry because if you reverse your slippers, you can avoid said disaster. If an owl hoots on the roof of a house at night, this could be a sign of bad luck even to the extent of the near-future death of someone you may know.

There are a number of superstitions having to do with the nighttime and spirits such as pixies and fairies and their negative form, the infamous "jinn," the word of which makes many Turks shudder at even uttering. For example, it is ill advised to swim in a lake at night because it is believed that that is when pixies and genies bathe and if you happen to be in the water at the same time, you may get struck in a variable number of ways. You should also take care to not pour out hot water or spin around a chain outside because you may just strike a pixie or other spirit and harm them unbeknownst to you. Urinating outside could bring upon you the gravest of fates by being struck by some calamity caused by pixies or fairies.

You are also not supposed to sweep your house at night, as it may invite poverty into your life, and if someone is hit with a broom, they could very well become paralyzed. Needles or knives are not used on Fridays and you are never supposed to directly hand someone a sharp object such as scissors because that would be considered a move instigating animosity. If someone gifts you a knife then you are supposed to give them a coin to prevent a fight from erupting between you both in the future.

A pomegranate in the home is said to bring good luck, while throwing out bread would certainly bring bad luck. Bread is considered sacred and instead of ever wasting it, Turks will either feed it to the birds or place it somewhere high to ensure it never hits the floor. There is also the belief that if there is a storm or snowy weather during a wedding, either the groom or the bride scraped the bottom of a pot of heated milk one too many times.

There are also a wide range of superstitions surrounding pregnancies and babies, such as the belief that if a pregnant woman does not eat something she craves, her baby will have a birthmark in its shape. If a child walks under a ladder, it is said they will never grow up to be tall. The same is considered true if someone jumps over a child. Meanwhile, it is also believed that if a boy drinks Turkish coffee, he may never be able to grow a beard.

As adults, however, you should always accept an offer to drink Turkish coffee with a friend because it will bring 40 years of friendship. If you happen to find yourself in the company of two people with the same name, make sure to situate yourself in between them and make a wish, as it is believed that wish will be granted. Also regarding wishful thinking is the belief that if you repeat a wish 40 times, it will surely come true.

Perhaps the most familiar of superstitious rituals is to pour water in the wake of someone's departure for a trip to ensure their journey flows as smoothly as water. The most bizarre belief, however, would have to be that if someone crosses under a rainbow, his or her gender will change. Although the latter seems like an impossible feat, there is no harm in taking heed with some of the embedded superstitious beliefs because who knows if you do as the Turks do in Turkey, they may just ring true for you. In which case today, the most pertinent lucky charm and ritual you could adopt would be donning red underwear, as it is believed that doing so on New Year's Eve will bring you good luck and fortune for the upcoming year!