A French storyteller brings tales to life in Turkey 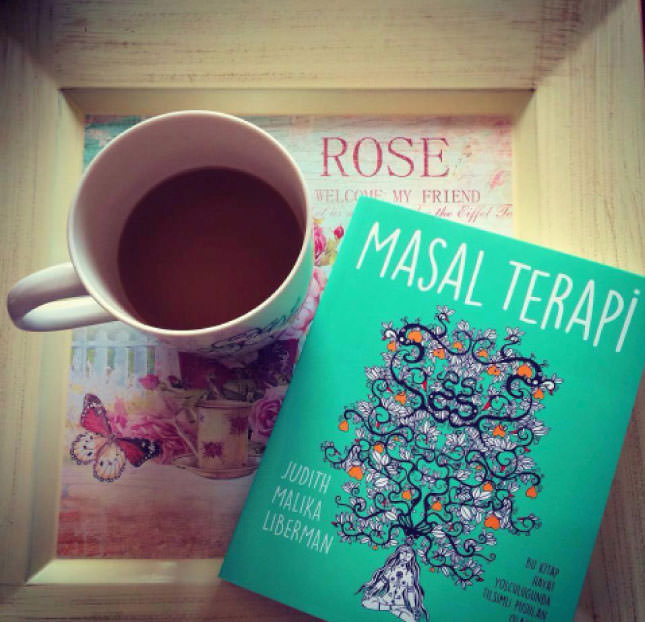 Judith Liberman, a French expat who has lived in Turkey for 11 years, is a glowing and graceful storyteller, as well as teacher, healer, writer, radio presenter and actress who continues to revive the Anatolian oral tradition in Turkey

Judith Liberman a French expat and so much more, who has lived in Turkey for the past 11 years has been experiencing a Renaissance of sorts in her new homeland; gracing the stages with her storytelling nights, sharing the art of storytelling with the masses on her own Turkish weekly radio show "Masal Bu Ya!", publishing a book entitled "Masal Terapisi" this month and debuted as an actress in a significant role in Turkey's newest blockbuster "Bir Varmış Bir Yokmuş" (Once Upon a Time), released just two weeks ago.

If it sounds like a lot going on for someone, it isn't really for Judith whose calm and clear demeanor and intriguing and eclectic background makes it evident that she remains on solid ground as a fervor of revived and new interest in folklore and tales wisps around her like fairies. She has an aura and energy that is magnetic and inspiring and her past and achievements are just as colorful as the beautiful textiles that adorn her. Her gift to Turkey has been shedding light on this ancient tradition that permeated Turkey's land in the past to those who grace her presence.

Judith has had a colorful life growing up in a weaving community that spent nights storytelling and sharing songs by a fire. Judith began learning the art of storytelling from the age of 14. She went on to study theater in Pomona, California, storytelling at the conservatory of Paris and received an MA from Sorbonne. Just as she was about to set roots in the States, she thought. "let me just do one more trip", which happened to be as a cultural attaché in Ankara for one year. That was 11 years ago.

Since then, she has worked in Turkey teaching academic writing at Middle East Technical University in Ankara and English at Koç University in Istanbul. She has become a certified yoga teacher and integrated parts of her interest in storytelling with her practice. She has been closely involved with the UNESCO Museum of Intangible Cultural Heritage in Ankara and worked with folklorists from Gazi University as well as others in projects to train storytellers, such as how use the oral narrative in healing for pediatric patients. She has also taken part in a vast number of projects, festivals and conferences and has even given a TEDx talk in 2013 on storytelling and the enchanted world. She has also since moved to Istanbul where she has monthly storytelling performances and a weekly radio show and just this month has published her first book and had her first role in a movie.

Judith's talents in the art of storytelling has drawn unprecedented interest in the tradition by people seeking to understand and share the stories within their own culture. Much of what Judith has done in addition to, well, telling stories, is imparting the wisdom of how to become skilled in the oral narrative, something she has done in countless projects, such as working with Turkish Folklore professors and many others to train a new generation of powerful storytellers in Turkey. In return, Judith acquired a wealth of knowledge of the folklore of these lands.

One of her favorite things, she says is to share Anatolian tales with Turks, giving them insight into their own legacy. The oral tradition was very strong in this land, she explains, with generation after generation imparting this knowledge from their ancestors. However, there was a break in the oral narrative tradition as a result of urban migration and many Turks of younger generations are less familiar with this treasure of their own heritage. For example, says Judith, everyone in Turkey knows Snow White as 'Pamuk Prenses' but in fact the Anatolian counterpart is Nardanye Hanim or for Cinderella, Küllü Fatma. Whereas, fables and fairytales are actually an imbedded part of Turkish folklore and in the villages and more rural regions, people very much live in a world where "cinler", (elfin spirits) and "periler" (fairies) exist, she explains. Judith says it comes very natural to Turks as Turkey used to be one of the great lands of storytelling. However, now with urban migration over the past decades, those brought up in the cities who have not had the opportunity to spend time in the villages, are unfamiliar with the wealth of knowledge that was once imparted through the oral narrative. Whereas, in the U.S., Texas Tech University even has an Archive of Turkish Oral Narrative.

Initially, Judith said, one of the things she wanted to do was to return to France to share the stories she uncovered from Anatolia, however the more she realized she first had to impart this knowledge of their own culture with the Turks, she realized there was more work to be done for her here in Turkey.

Her radio show Masal Bu Ya!, which airs on Sunday's on NTV Radyo, is going into its eighth week. Every week, Judith hosts a variety of storytelling related guests and then shares her storytelling magic with her listeners in a divine silky voice. Although hers is a near-perfect Turkish accent, Judith says language shouldn't be a barrier because the art of storytelling is so much more than that, which is why she had no problem transitioning into storytelling in Turkish eventually and is now able to impart her wisdom in her adopted homeland.

Judith's first book, entitled Masal Terapisi (Storytelling Therapy), published in Turkish by Doğan Novus, hit the shelves nationwide this month. Intended to act as a guide, the book consists of 54 very special stories, handpicked and fine-tuned by Judith as well as corresponding practices, quotes and insight into how this story's meaning may play into your own life. "Dear traveller, this book was dreamt to be your compass, keep it in your satchel. Take it out whenever you find yourself at a crossroad, anytime your eyes look uncertainly at two roads trying to imagine where they will lead, it will help you find your way," writes Judith in the introduction. It is the type of book where one would consult when seeking an answer or making a wish and could pick a number corresponding to a story or could simply turn to any page in the book to see where it leads you.

Judith says she been a player of serendipity games for many years and believes that we hold all of the answers in our hearts but sometimes need the outside world to point us in the right direction. "The smallest changes in our life start a chain reaction", she writes,and these practices are 54 ways to invite change in your life." After all, Judith is a strong proponent of the concept, "If we could change the stories the world hears, we could change the world…"

Judith became the perfect person to consult in the making of the film "Bir Varmış Bir Yokmuş" (Once Upon a Time) starring Mert Firat and Melisa Sözen and directed by Ilksen Başarır that was just released on March 6, which dabbles in the world of storytelling and fairytales. However, it was her mesmerizing persona no doubt that inspired the writers to pen a part just for her. You can see her in her turn as an actress in a significant role in theaters nationwide.

However, watching Judith perform live joined by the talented multi-instrumental musician Tahir Ayne, which she does monthly at the Nazım Hikmet Kültür Merkezi, is an experience surely not to be missed. Her audience, which continues to grow and now overflows from the main theater, is taken to a magical place both spiritually and literally as this stunning cultural center in Kadıköy deserves a whole write-up of its own.

You can find out about her performances on the Facebook page Masalhane and also check out her blog astorytellerinistanbul.blogspot.com as well as hear her on air this Sunday at 19:15 and 20:15.
Last Update: Mar 20, 2015 11:01 pm
RELATED TOPICS