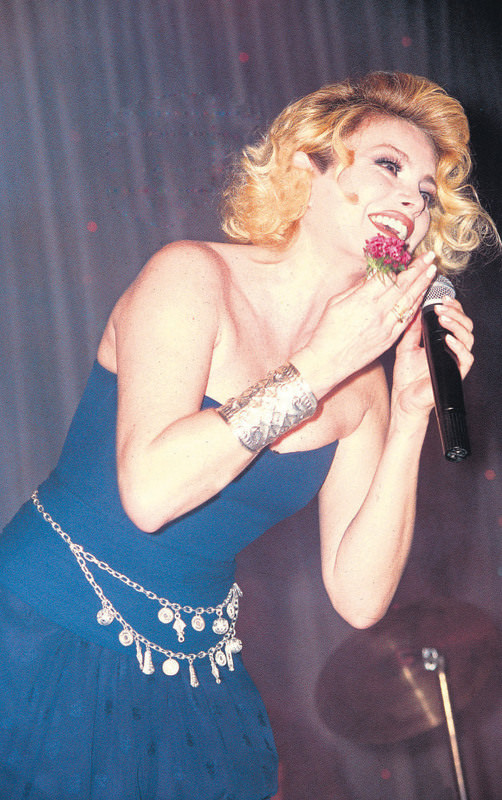 With the recent, untimely death of beloved musician, songwriter and performer Kayahan at the age of 66, along with mourning, it is high time to celebrate some of Turkey's pop music legends who ruled the country's airwaves and hearts in the final quarter of the 20th century

Kayahan, who died from cancer-related complications on April 3, is joined by a league of well-loved Turkish pop music performers, namely Sezen Aksu, Ajda Pekkan and Nilüfer, whose heydays began in the '70s and continued well on into the 21st century, which changed the face of Turkish music today. Their love songs and pop classics are ingrained in almost every Turk you will meet and their melodies still spill onto the streets, performed by guitarists in cafes and teashops.

I first came to Turkey in the summer of 1985, and buses and shared taxis – known as "dolmuşes," which at that time were vintage American cars from the '50s – would blast the radio and cassettes playing songs by these very popular performers. My father had just moved from the U.S. with his newest wife, a young, colorful Korean woman, who like me didn't speak Turkish. We were both obsessed with Sezen Aksu especially, and her "Sen Ağlama" and "Git" albums in particular – released in 1984 and 1986, respectively – were instrumental in both of us learning and conquering the language. With the printed lyrics in tow and a Walkman attached at the hip, I mastered and internalized the words of their songs in no time, giving me insight not only into the language but even more so into the culture. My stepmother took her admiration for Sezen to a whole new level. She would dress up in full traditional Korean silk garb with huge flowers in her hair and perform Sezen's "Sen Ağlama" album from start to finish at dinner parties. This unique talent of giving a Korean twist to Turkish love songs later got her a spot performing at Taksim's prestigious Marmara Etap Hotel in the early '90s.Sezen was born in 1954 in Denizli and has been dubbed the "Queen of Turkish Pop" – and more lovingly, the "Minik Serçe" (Little Sparrow). She debuted in 1975 and went on to release 25 solo albums, with more than 40 million albums sold worldwide. "Sen Ağlama" is my personal favorite, however, it was her 1991 release "Gülümse" that is perhaps the most popular. Sezen has hugely influenced Turkish music, and it was her own protege Sertab Erener who would win Turkey the Eurovision Song Contest title in 2003. Moreover, her work with Tarkan resulted in the mega-hits "Şımarık" and "Şıkıdım" that made him a household name.

Ajda Pekkan, born in 1946 in Istanbul, Sezen Aksu's friend and sole rival for the title of most successful female Turkish music artist, with a career spanning five decades thus far and 42 million albums sold, is aptly known by the nickname "Superstar." A blond bombshell who has appeared in almost 50 films, Ajda went on to gain international acclaim for her musical performances, garnering her the honorary distinction of the Chevaliers of the Ordre des Arts et des Lettres in 2013. Fluent in English and French, Ajda's first hit was "Her Yerde Kar Var," an arrangement of Salvatore Adamo's "Tombe la Neige" by Fecri Ebcioğlu in 1965. She went on to record more than 20 studio albums, and competed for the 1980 Eurovision Song Contest with the pop classic "Petrol." Her songs "Hoşgör Sen" and "Boşvermişim Dünyaya" are my personal favorites as well as her remakes of classics such as "Those Were the Days," "Bang Bang," "Holding Out for a Hero" and Turkey's wonderful answer to Gloria Gaynor's "I Will Survive." However, a majority of her songs are actually in French.

Known simply as Nilüfer – born in Cihangir in 1955 – this very popular and well-loved pop singer who debuted in the '70s and went on to represent the country at the Eurovision Song Contest in 1978, was most notably known for her collaborative work with Kayahan. Like Ajda, she was also very popular for her Turkish remakes of French songs, most notably those by French singer Enrico Macias. Her most popular album was "Geceler," released in 1987 and named after the hit single written by Kayahan himself. Fortunately, she successfully beat cancer – unlike Kayahan tragically – and has been Turkey's national ambassador to UNICEF since 1997. My favorite songs, one that are memorized from start to finish by nearly every native Turk, are "Boş Vermişim," "Yaşamak Ne Güzel," "İspanyol Meyhanesi" and "Dünya Dönüyor." On her latest album, released in 2011 and titled "12 Düet," she performs 12 of her classics with a rock twist in duets with various Turkish musicians and groups. Nilüfer and her beloved collaborator Kayahan worked together throughout their careers, and performed together this past Valentine's Day in what was unfortunately Kayahan's last public performance after a career spanning three decades.Kayahan,born in 1949 in İzmir, a singer-songwriter famed for his original compositions, released more than a dozen solo albums, eight of which were some of the best-selling albums in Turkish pop music history. In 1991, he represented Turkey in the Eurovision Song Contest. His album "Yemin Ettim," released the same yea

r, is perhaps his most popular and my personal favorite; however, it was his song "Geceler," which won him a Golden Orange Award at the 1986 International Mediterranean Music Contest and went on to become the album's title song for Nilüfer's most popular release. Although he is mainly known for his romantic ballads, Kayahan also wrote children's songs and produced a TV show for kinds that ran on TRT, Turkey's national broadcaster.

Turkey has lost one of its greats with Kayahan's passing. His legacy of composing and writing his own material set a precedent for the performers that followed him. The music of Kayahan, Sezen Aksu, Ajda Pekkan and Nilüfer played influential roles in contemporary Turkish popular music, which now spans a variety of genres including but certainly not limited to Athena, a ska-punk band who represented Turkey in the Eurovision Song Contest in 2004, multiple rock bands including Mor ve Ötesi and my personal favorite, Duman, high caliber rappers such as Ceza and even an excellent Turkish reggae band called Sattas. So, as we mourn the loss of one of Turkey's musical greats, let's celebrate the influence he and those of his era have had on the music of today. I highly recommend catching a performance of one of these very special performers, especially Turkey's pop music legends.I used to watch each of these performers at Rumeli Fortress every summer, and even got the chance to meet a very gracious Kayahan in person backstage. With the exception of Kayahan, whose focus was solely on the music, concerts by Ajda and Nilüfer were especially marked by costume changes and dance routines – sometimes even performances by Turkey's state ballet dancers. Nonetheless, it's a grandiose affair that should not be missed. While all still perform occasionally, you can see Sezen Aksu live next month at a concert series held at the Bostancı Gösteri Merkezi.
Last Update: Apr 07, 2015 11:20 pm
RELATED TOPICS