Celebrating the centenary of Anzac Day 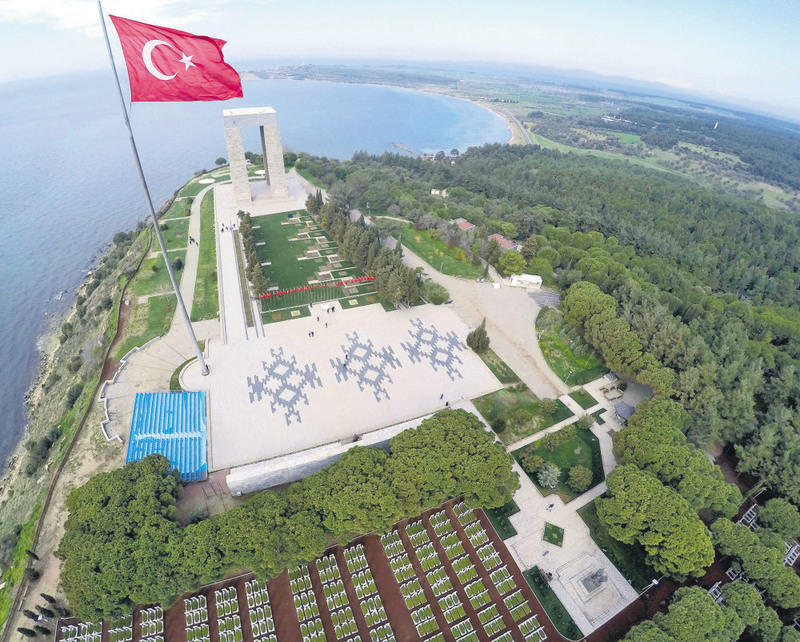 More than 10,000 Australians and New Zealanders will make the annual Anzac Day pilgrimage to Gallipoli's battle sites this weekend. Numerous events will take place attended by top state officials from around the world

This year marks the 100th anniversary of the Australian and New Zealand Army Corps (Anzac) landing on Gallipoli's shores on April 25, 1915, to fight for the Allied forces against the Ottoman Empire in World War I. Intending to capture Istanbul, the Anzac forces – consisting of Australian and New Zealand soldiers – instead suffered terrible losses and would later retreat – those that were still alive that is. Those that were less fortunate were buried at Gallipoli, and their remains and legacy have been cared for just like the countless Turks who lost their lives in this heartless battle.

This lengthy battle and heavy casualties, in what was both Australia and New Zealand's largest military campaign, has been internalized by the citizens of both Australia and New Zealand as the foundation of their national identity. Anzac Day, celebrated annually on April 25, is in essence a celebration of national unity for the Aussies and Kiwis that come out to the Gallipoli peninsula on this day of remembrance. It has now become a sort of rite of passage or pilgrimage.

It was the young Anzac soldiers from these faraway countries that landed at Gallipoli 100 years ago only to be met with fierce resistance from the Ottoman forces who were commanded by Mustafa Kemal, who would later become known as Atatürk and found the modern Turkish Republic. Since then, this date has become the most significant national commemoration day for both countries, and thousands of young Australians and New Zealanders make the trip to Turkey's Çanakkale each year to cross the Gallipoli peninsula to spend the night on the battlefield in commemoration of the Anzac legend of their forefathers who lost their lives there.

Although Turkey celebrates its victory in the Gallipoli Campaign on March 18 each year, it is the precise landing date of the Anzac troops on April 25, 1915, that is commemorated annually by this pilgrimage of national identity. The government generously assists in organizing the commemorations, and it is this cooperation that has allowed this event to transform into this very unique pilgrimage.

This year being the centenary has long been anticipated by many, and an unprecedented 40,000 applications were filed with the Australian and New Zealand governments by individuals wanting to come out to Gallipoli for this very important date. Instead, both governments set up a ballot system to select a combined 10,000 visitors (8,000 Australians and 2,000 New Zealanders) who will be allowed to attend the ceremonies on Gallipoli's shores this weekend. Also in a first, what is usually more of a "backpacker" type of affair, more than half of the participants attending this year are over the age of 45.

Although certainly a once-in-a-lifetime experience, attending the ceremonies is no such an easy feat, and most visitors should have a certain degree of physical ability. Visitors will have to navigate rugged terrain and be exposed to weather conditions for up to 30 hours. Once they leave their tour buses on the evening of the 24th, they will have no access until the next day, which could go well into the evening. As a result, visitors must bring everything they will need for a full 24-hours outdoors with them. In addition, this being the start of spring, the weather is fickle with freezing temperatures at night and the sun beating down during the day. Although there are grandstands set up for the events as well as portable amenities and food stalls, there is no permanent infrastructure at the commemorative sites, and much of the time is spent standing upright to accommodate the thousands that come out. Security will also be in full force, and lengthy periods of time may be spent in control point lines. In addition to attending all events, visitors have to navigate nearly 10 kilometers of unpaved and sometimes steep uphill roads to get to the various commemoration and burial sites. However, there will be a limited number of assisted mobility passes for those needing extra assistance. There is no public transportation to the Gallipoli battlefields and private vehicles are strongly discouraged, so the majority of visitors will have secured spots on tours, which will bus in visitors to the national park.Every year for Anzac Day, three commemorative services are held: A joint Dawn Service at the Anzac Commemorative Site followed by an Australian Memorial Service at the Lone Pine Cemetery, and a New Zealand Memorial Service at Chunuk Bair. The events commence with the overnight reflective program, which will commence at 8.00 p.m. on Friday, April 24 at the Anzac Commemorative Site. Stands will be set up to accommodate 5,000 on a first-come first-served basis, and the remainder of those present will gather on grassy areas, many standing in sleeping bags and huddled together under flags as blankets all night for warmth. During all commemorative ceremonies, large video screens will be set up to ensure vantage points for everyone. The reflective program includes documentaries and interviews about the Battle of Gallipoli, as well as musical performances by the Defence Force Band.After a hopefully not-so-chilly night, the approximately hour-long Dawn Service with highly anticipated appearances by Australian Prime Minister Tony Abbott, New Zealand Prime Minister John Key and British royals, Princes Charles and Harry, as well as top-level Turkish state officials will commence at 5:30 a.m. After which, visitors will make the trek up Artillery Road to either the Australian Memorial Service at Lone Pine Cemetery or the New Zealand remembrance ceremony at Chunuk Bair Memorial. The Australian Memorial Service at Lone Pine commences at 10.00 a.m. and will conclude at 11.00 a.m., while the New Zealand Memorial Service will follow at 11:45 a.m. and come to a close at 12:15 p.m.

The remainder of the afternoon will be spent trying to navigate passengers onto their tour buses in what may ensue as enjoyable chaos for hours. Fortunately, however, after a day of sunshine forecasted for Friday, Saturday is expected to be overcast with a slight chance of showers in the evening, when the event will hopefully have ended. Anzac Cove and the commemorative site will be closed to visitors until they open their gates at 6.00 p.m. on the day of the 24th, and no arrivals will be accepted after 3.00 a.m. on Saturday morning.

For many Australian and New Zealand nationals, making this pilgrimage to the Gallipoli peninsula where their ancestors laid their lives on the line in foreign lands is viewed as a sort of spiritual obligation, and they have a deep connection to this very significant battle site set where the Aegean Sea and the Dardanelles Strait meet. Many if not all will have taken painstaking measures and costs to come out this year, and even the Conservation Volunteers, who will be on hand to assist visitors, will have most likely paid out thousands just to be there.In return, Turkey has always embraced their arrival, and in a unique attitude, allows the ancestors of what were once enemy forces to commemorate their own troops in battle in the thousands. The 1934 tribute by Atatürk perhaps depicts Turkey's sense of tolerance and understanding best: "Those heroes that shed their blood and lost their lives. You are now lying in the soil of a friendly country. Therefore, rest in peace. There is no difference between the Johnnies and the Mehmets to us where they lie side by side here in this country of ours … You, the mothers who sent their sons from faraway countries, wipe away your tears; your sons are now lying in our bosom and are in peace. After having lost their lives on this land, they have become our sons as well."
Last Update: Apr 22, 2015 11:52 am
RELATED TOPICS