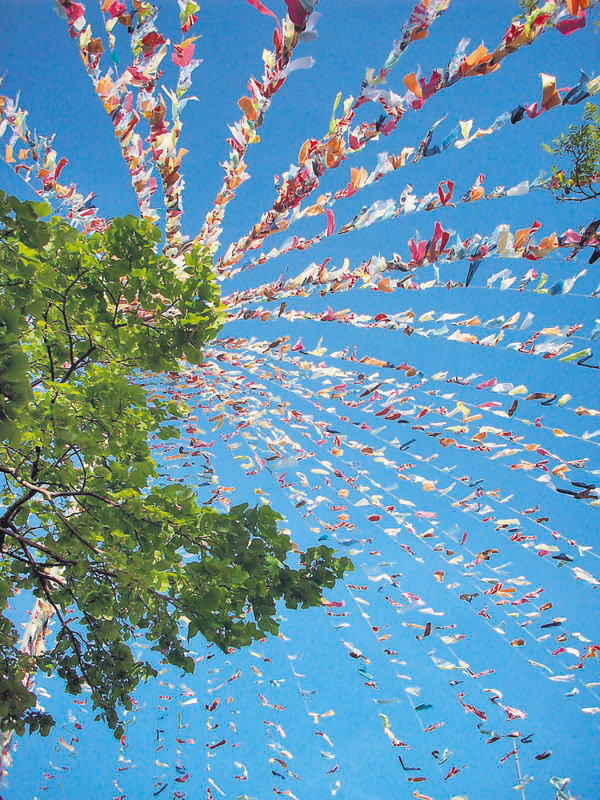 If there is something specific someone wants, they will draw a painting of it or make a model or replica of it, such as a car or a home, and will then hang it on a rose tree
by Leyla Yvonne Ergil May 04, 2015 12:00 am

May 5, Hıdırellez, which is celebrated throughout Turkey and the Turkic world as the ushering in of spring. In practice, however, it is a celebration of rituals and superstitions as well as about making wishes

For hundreds and perhaps thousands of years, the holiday of Hıdırellez has been celebrated throughout Turkey and the Turkic world as the ushering in of spring, harvest, bounty and a time to wish for your heart's desires.

The start of spring is celebrated throughout the world in a variety of different holidays; Mexico has Cinco de Mayo, Spain has carnival and Turkey, the Turkic world and the Balkans has Hıdırellez. Turkey's most colorful holiday, Hıdırellez is filled with rituals, traditions and celebrations of such uniqueness that it is also a candidate for UNESCO's list of intangible heritage.

Hıdırellez is the celebration of the belief that one day a year the Prophets Hizir (Al-Khidr) and Ilyas (Elijah) meet on the earth creating an envelope of time, over the eve of May 5 to May 6 in which the wishes of those deserving may be granted. In addition, May 6 has traditionally been considered the start of the sun-filled spring and summer months. In practice however, it is a celebration of the gypsy Romani culture, rituals and superstitions and making wishes. The Christian variation celebrated in the Balkans is referred to as Durdevdan. The May 5 starting date according to the Gregorian calendar falls on April 23 in the Julian calendar.

Throughout Turkey for the most part, Hıdırellez celebrations will kick off on Tuesday evening and continue into Wednesday. Hizir, a sort of supernatural spiritual figure considered to have attained immortality from drinking the water of life is believed to come to the aid of those in need on this one night a year. Considered to be a healer, wish granter, miracle worker and abundance and prosperity bringer, similar in a sense to Santa Claus, Hizir is believed to pay visits to grant the wishes of those deserving on this very night.

According to beliefs, this special night is one of reckoning in which those who are deserving will be granted their desires and those who are not have a chance to be forgiven of their sins. This is done by jumping over a fire, perhaps the greatest symbol attributed to this holiday. In addition to clearing the slate, jumping over a fire on the eve of Hıdırellez is believed to be a cure-all of sickness and the "evil eye," the omnipresent superstition that jealousy or elaborate praise could end up jinxing something good.

Other rituals observed on Hıdırellez is to don new clothes and shoes and clean the house from top to bottom, because it is believed Hızır will not visit homes that are not properly prepared. People will leave any bread baskets, food containers, bags or purses open in case they happen to be filled while Hızır visits. If there is something specific someone wants, they will draw a painting of it or make a model or replica of it, such as a car or a home, and will then hang it on a rose tree or they will simply tie colorful pieces of cloth to represent their heart's desire. Women seeking marriage or fertility will place their jewelry in a clay pot and say prayers above it in a circle. Yet another ceremonial ritual is for the maiden's to put on wedding gowns and enter water or one can simply write their wish down on a piece of paper that they will then throw into the sea for their wish to be granted.

Nonetheless, it is a joyous celebration and everyone participating will be either playing music or dancing to it leading up to an exciting fire-jumping ritual that takes place late at night. Traditionally the celebrations take place in wooded areas or by the sea and families will bring picnic baskets and supplies to spend the whole night in nature together with their community celebrating this very special time of year.

In Istanbul, Hıdırellez is celebrated annually on May 5 in Ahırkapı, a Gypsy neighborhood known for housing musicians and "meyhanes" (traditional taverns) just around the bend from Sultanahmet. The evening will begin with a traditional march from Sultanahmet Square to Ahırkapı. Crowds will be gathering in front of the Hagia Sophia at 19:00 on Tuesday where they will march to the Ahırkapı neighborhood, where people from all over the city will flock to celebrate the festive affair. The festivities will be spread out along Keresteci Hakkı Sokak and Şadırvan Sokak, with street performances by musicians, lots of folk dancing and belly dancing and food and drink supplied by local vendors. If you play an instrument, then the tradition is to bring it along to what will be an evening of spontaneous jamming and improvisational performances and lots and lots of "davul and zurna," the traditional drum and shrill horn will permeate the air.

A parallel celebration will be held by the Şişli Municipality in the Kuştepe neighborhood, which will have Romani musical and dance performances as well as the traditional Hıdırellez bonfire. Events will kick off at 17:00 and will run into the night as a line-up of one after another of popular Romani musicians take the stage as the crowds witness those daring jumping over a fire.

The biggest celebrations held for Hıdırellez in Turkey takes place in the Thracian capital of Edirne, a western province bordering Bulgaria and Greece and considered to be the heart of Turkey's gypsy community. Referred to as Kakava, tens of thousands will come out to this festival is held in the Kırkpınar Oil Wrestling stadium which was once the Inner Palace (Sarayiçi), serving as the private hunting grounds for Ottoman sultans. Endless music and dance will accompany the bonfire jumping and the next day anyone who has a wish they would like granted will head to Tunca river, where rituals will be observed such as hopeful brides taking dips in the sea and wishes being ushered off in the waves.

Although the Edirne and Istanbul celebrations are certainly the most well-known, Hıdırellez continues to be celebrated in many cities, towns and villages throughout the country. In general, people tend to spend the holiday in nature or near water, where they feast, practice the various rituals attributed to these special two-days and play traditional music, sing and perform folk dances.

As for me, I will be heading to this form of traditional Hıdırellez festival in a beautiful forested Turkmen village, aptly named Güzelköy and nestled in the legend and oxygen-laden Mount Ida in Çanakkale. On Wednesday, May 6, thousands from the Kazdağı region, as this mountain range is referred to in Turkish, will be coming out to a beautiful pasture set amongst hills of pine trees and fields of olive groves. Donning their finest traditional garb, women will be wearing colorfully-designed fine velvets, silks and satins, while men will be dapper as they perform folkloric songs and dances to a feast of fresh locally sourced fare for a joyous celebration that for me will take place from a wallflower seat on blankets spread out on the grass and joined by my beloved friends to celebrate this glorious season and country that we live in!
Last Update: May 10, 2015 10:54 pm
RELATED TOPICS