Color, music and youth: Top festival picks for May 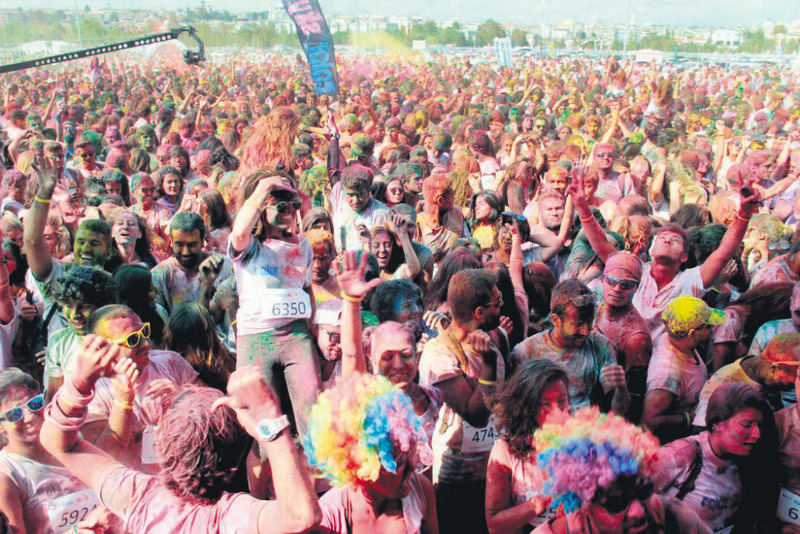 by Leyla Yvonne Ergil May 15, 2015 12:00 am
As an expat, it can be tough to navigate the broad network of events Istanbul and many of Turkey's great cities have to offer. Here is the best of this festival flurry in Turkey for music, food and fun in the sun for the month of May

"It's May, it's May, the month of 'yes, you may' as the Camelot song goes, "That lovely month when everyone goes blissfully astray …" Spring is here to stay and May is nearly on its way out, but in the final weeks of this month, also marked by Youth and Sports Day, the festival season is rampant with numerous delectable events you will want to mark on your calendar.Tuesday, May 19, is Youth and Sports Day, also known as Commemoration of Atatürk, Youth and Sports Day. It is a national holiday held each year on the anniversary of Mustafa Kemal's landing at Samsun, which is regarded as the start of the Turkish War of Independence. This holiday is celebrated with parades and sports events held for children during the day and big blow-out concerts by popular performers in big metropolises throughout the country at night.

In Ankara, where top officials will be laying a wreath at the Atatürk Mausoleum during the day, in the evening, popular alternative group, Manga, which melds Anatolian melodies with electronica, will be performing at AnitPark. In Istanbul, take your pick from two great outdoor concert options on Tuesday, with Turkey's prince of pop, Tarkan, performing in Beşiktaş and a full day of music and sports in Kalamış. The Beşiktaş celebration will begin with a torchlight procession from Dereboyu Mosque to Beşiktaş Square, followed by a concert by Tarkan and a fireworks show. The festivities are part of a week-long series of events devoted to youth and sports held by the municipality, which kicks off this weekend with an especially interesting event.

This Sunday, May 17, is the Color Up Koşusu Bebek-Kuruçeşme, a fun two-kilometer run done in colored powder reminiscent of Holi, India's joyous festival of color. The fun run will start off at 5:00 p.m. from Bebek Park and will finish at Kuruçeşme Arena, where a DJ party will commence under an air demonstration by Solo Türk, the Turkish Armed Forces' aerobatic F-16 fighter jetdisplay team. The evening will end with a performance by popular Turkish pop vocalist Murat Dalkılıç. Do not worry, all of the paint used will be starch-based and will not contain chemicals. There will also be a special blowing station to help get the color powder off after the run. Free t-shirts will also be distributed in case you want to frame it, as the organizers suggest, for a keepsake from the colorful night. If dancing in color is your thing, then stay tuned for the Life in Color Big Bang party hosted at Küçükçiftlik Park on Aug. 1, as this traveling festival is dubbed the world's largest paint party.

On Tuesday, May 19, a full day of free sports activities, workshops and performances by the sea all set to a soundtrack by a live DJ followed by a series of exciting performances by some of Turkey's best alternative acts including Pilli Bebek, Yasemin Mori and Mabel Matiz. Meanwhile in İzmir, Duman, Turkey's resident rockers, will be taking the stage at Gündoğdu Square, while Teoman, a charismatic crooner of the rock-pop variety, will perform a free show in Bursa held at the Nilüfer Municipality Halk Evi.Next weekend could in fact be considered the official start to Istanbul's outdoor music festival season with two major international festivals boasting performers from all over the world. Over the May 23-24 weekend, the highly anticipated Chill-Out Festival resumes with British rock band Slowdive headlining on Saturday and the legendary U.S.-based DJ and performance artist collective Thievery Corporation topping the bill on Sunday following a long list of global acts. Sure to be the hottest event in town, the Chill-Out festival will take place in the mega-performance space of Life Park in Sarıyer.

Head a little further north to the Sarıyer district of Kilyos, which doubles as a summer beachside resort on the Black Sea for the Babylon Soundgarden Festival on Saturday, May 23, where four different stages will have over two dozen acts from all sorts of genres and countries from all over the world. Music ranging from Irish rapper Maverick Sabre to Afro-pop artist Orlando Julius, to name just a couple on a long list of eclectic acts. This festival, which offers an excellent excuse to get away from the hustle and bustle and discover Istanbul's more natural side, kicks off at noon for a full day of fun at the beach. If you want to stay local and try out local street food, check out Gastronomika, a two-day feast fest hosted by Souq Karaköy and Culinary Backstreets at Külah Karaköy, in the heart of Istanbul's newest up-and-coming hipster-bohemian neigorhood. The theme will be "street food" and represents the future of what these local delights could evolve into.The final weekend of May is no different with festivals galore and multiple musical events to choose from, starting with Ekşi Fest, an award-winning party in honor of Ekşi Sözlük, Turkey's own collaborative internet dictionary platform. Although not guaranteed to be accurate, this online encyclopedia of sorts can be useful in finding out public opinion on Turkey-related and other topics. Among the long list of bands lined up for the day-long event in Life Park is Wooden Wisdom, which includes member Elijah Wood, famously known for his rendition of Frodo Baggins in the "Lord of the Rings" trilogy. Also performing are reggae-punk act Che Sudaka, French reggae artists Dub Inc. and Lebanese rock band The Wanton Bishops.

A serious contender for the weekend is Güzel Bir Gün (A Beautiful Day), a new picnic-themed event that will have a variety of musical acts affiliated with Nublu and Mini Müzikhol performing with a series of gourmet food stands set up to satisfy your culinary palate in the heart of the city at Maçka's Küçükçiftlik Park. A not-to-be missed event for foodie and music lovers as jazz fusion heavy-hitter İlhan Ersahin himself will be taking the stage with his Istanbul Sessions group. Other musical acts include Kalabrese & Rumpelorchester, an electro-acoustic set by indie group Büyük Ev Ablukada, Gaye Su Akyol and Anatolian psychedelic rock group Ayyuka, to name a few, while just some of the stands include Datlı Maya, Upper Crust, Texas BBQ and even Korean fusion. The outdoor picnic vibe continues on Sunday at Küçükçiftlik Park for the first-ever Harvest Festival, celebrating 40 years of hosting musical performances in this picturesque outdoor setting in the heart of the city. The park will be transformed into an outdoor garden with loads of workshops on during the day, including but certainly not limited to, permaculture, guitar-making, natural remedies and soap-making and will also have a bazaar selling natural products, clothes, vinyl and even coffee. As for the music, British indie rock band Alt-J will headline with Danish alternative rock band Mew supporting. However, it would be worth it just for the chance to check out Sattas, Istanbul's very own excellent reggae group that has pioneered the genre in Turkish.
Last Update: May 15, 2015 10:25 pm
RELATED TOPICS