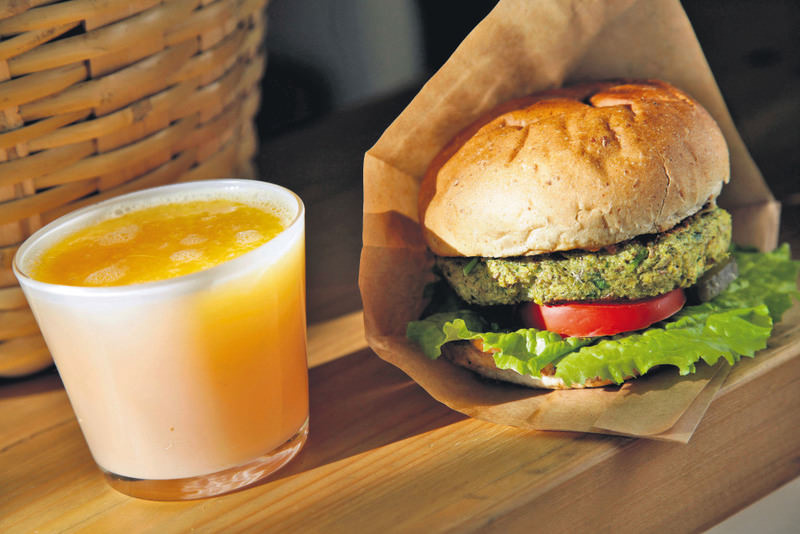 Next weekend, a community of passionate and compassionate people will be gathering in their hundreds at the Raw Culinary Arts and Hospitality Institute in İzmit's Kartepe district to inaugurate Turkey's first-ever VegFest – a two-day event that will focus on sustainability, mindful consumption and healthy living

On the weekend of June 13-14, Turkey's blossoming sustainable, vegan and raw-food networks will be banding together to create a very special two-day festival: Turkey's first-ever VegFest. The festival will be held in Kartepe, a district in the provincial Kocaeli town of İzmit at Raw Gourmets International's (RGI) Raw Culinary Arts and Hospitality Institute, pioneered by internationally acclaimed raw chef Mehmet Ak. This very special event was spearheaded by Hilal Özcan, and is being coordinated by the crew at Gaia Dergi – a monthly magazine and website focusing on sustainable living as well as a wide array of subjects ranging from ecology, science, technology, arts, culture and minorities – led by Burak Avsar.

A series of speakers and events are scheduled for the festival, which will be dishing up raw vegan fare and the setting, an hour's ride from Istanbul, provides the perfect weekend escape to focus on compassionate and healthy living with like-minded individuals in Turkey. This event is free and anyone can volunteer, be a part of the festival themselves or bring their favorite vegan culinary masterpieces as well as camp out overnight. So grab your tent and take yourself to what will surely be a utopian-like environment for a weekend filled with yoga, music and dance and lots of discussion on this very important cause of promoting a plant-based, cruelty-free and sustainable lifestyle.

This festival aims to promote vegan ethics and awareness, and will be an opportunity for people to give this healthy style of eating a try. In addition, the event will support the eventual establishment of Turkey's first farm animal sanctuary in Kartepe. I had the opportunity to speak to Avşar who said the area where the event is being held is "somewhere any nature lover will enjoy, as it features green plains surrounded by trees. We're planning to eventually engage in organic farming [which was once prevalent here]."

I asked him to tell me more about the Kartepe F.A.R.M. Sanctuary, which happens to be a growing concept all over the globe. "There are many examples of its kind in the world," Burak explained, and said that one of the best is Edgar's Mission Farm Sanctuary. "There, animals are saved from torture and are able to live their lives happily with their families." In July, the Kartepe crew will head to Washington for the 2015 Animal Rights Conference to promote their venture.

The event is being hosted by the pristine and tranquil RGI Raw Culinary Arts and Hospitality Institute in Kartepe, run by Turkey's top raw chef Mehmet Ak. At this culinary school and nature preserve, animals are not used in any way. At this event, there will be no meat, dairy, eggs, honey, leather or even wool. RGI also offers year-round training on raw foods taught by Ak, who happens to also hail from Kartepe. After becoming a culinary success and multiple restaurant owner in the U.S., Ak has now returned to his homeland to bring his healthy wisdom and accolades from leaders in the sustainable and ecological movement such as David Wolfe, Deepak Chopra and Terry Willard. He is also a certified Body Mind nutritionist, and offers regular courses and retreats to make preparing healthy, fresh, live foods popular in Turkey.

"In Turkey, vegetarianism and veganism are quite misunderstood concepts. Vegetarians and vegans are minorities in society and can sometimes feel isolated due to such circumstances. At the same time, many people are also subjected to criticism from vegetarians and vegans," Burak said, emphasizing that the aim of this festival is to bridge that gap. "Therefore, we are holding this festival in order to eradicate any miscommunications between vegans and vegetarians and to fully explain the benefits of veganism as it should be," Burak stressed. Burak said they are expecting somewhere between 500 to 750 participants, adding that any volunteers are welcome to come early to help set up and generate positive energy for the festival.The festival will consist of a number of speakers as well as dance and music performances in addition to a wide variety of yoga sessions and, of course, lots of fresh, raw, vegan food. There will be film screenings, bibliotherapy workshops and a second-hand swap. As for some of the speakers lined up, psychologist Öykü Büyükdere, whose Pembe Defter is Turkey's sole cruelty-free cosmetic YouTube channel, will provide easy alternatives and ways to abandon using products tested on animals. Turkey's most well-known vegan physician, Dr. Murat Kınıkoğlu, will give a talk on vegan nutrition and health, while Dr. Oğuzcan Kınıkoğlu will discuss the necessity of vitamin and mineral supplements in a vegan diet. Vajracaksu Dharmachari, a member of the Triratna Buddhist Community, will give breathing awareness and meditation courses, Melis Ulaş will share the unknown truths of nutrition and the benefits of eating live, raw food and Yeliz Utku Konca will offer Jivamukti Yoga lessons – one of the many varieties of yoga teachers will share this weekend. And of course, there will be the culinary delights of Ak and his team who will be dishing up vegan fare for attendees all weekend.

Most importantly, however, is that the festival will be an opportunity for people to share their experiences and concerns about taking on a vegan lifestyle and to learn of its importance, which spans from compassion and health to global climate change. This festival, which is of the first of its kind, is a collaborative event as well as a work in progress. Rather than proposing a model of leadership, the festival aims to bring together all interested parties who share the same vision to help out, volunteer or participate. Kartepe is approximately 100 kilometers from Istanbul in Anatolia just past Gebze. So grab your tent and connect with nature for an easy escape from the city to take part in this positive affair with like-minded souls.

For more information, check out the VegFest Facebook page and website, or send an email to: info@vegfestturkey.org.
Last Update: Jun 06, 2015 1:55 am
RELATED TOPICS