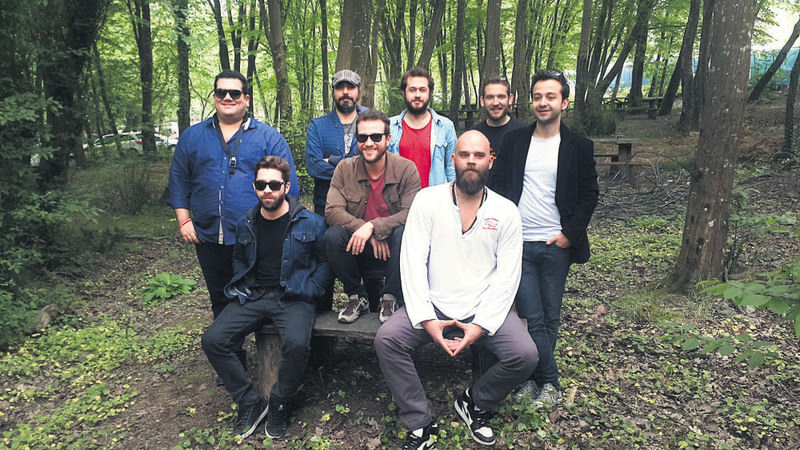 Sattas has long been my favorite Turkish band in terms of watching their live shows and listening to at home, as well as sharing their videos and sole album with my friends in case they haven't yet heard of this awesome and authentic reggae group from Istanbul. Therefore, it is high time to get to know the band Sattas – as straight off from a Europe tour, they join the line-up on Saturday at this weekend's One Love Festival, followed by a string of shows lined up for the summer and their second album release in the fall.Founded more than 10 years ago by Orçun "Leo" Sünear and Derya "Derryll" Eke, the Sattas crew consists of Sami "Mr. Vertigo" Dönmez on guitar, Öykü "Dubatista" Gülata on bass, Faruk "Simple Sample" Tugayoğlu and Ozan Tekin on keyboards, Emir "Mr. Shrink" Erünsal on the saxophone, Seckin "Mr. Bonedaddy" Ozmutlu on the trombone, Mert "Fehmi" Alatan on the trumpet, Derya "Deryll" Eke on drums and Orçun "Leo" Sünear on vocals. I had the opportunity to catch up with Sünear on Sattas' return from being one of the headliners of the Ruhr Reggae Summer Festival in Dortmund, Germany, one of this summer's biggest reggae festivals in Europe.

I asked Sünear how it was that he first got into reggae, as a decade before Sattas formed, this style was nearly nonexistent in Turkey minus the exception of a small number of pioneering DJs that, along with Sattas, paved the way for many reggae groups that are popping up now.

Sünear said he was a child when he first heard Bob Marley's "Could You Be Loved?" on a tape of his uncle's. "I was totally drawn to it, but wasn't really aware of why at the time. Later, when I grew up and came across this style of music again, it really affected me. What matters most is that I learned that reggae was a much larger ocean and it has had a real positive effect on my life."

Now, this hunky and charismatic front man that seems to have transcended the borders separating Turkey and Jamaica encompasses the true reggae vibe with superior vocal stylings accompanied by a full brass band and the crew that is Sattas, which always performs with a lot of talent and a lot of heart. Live, they are easily the best band to watch perform in the city, as you are guaranteed to groove and mingle in good spirit to some excellent reggae. In addition to playing their own unique renditions of reggae and classic Bob Marley and the Wailers' songs, they also have a repertoire of original pieces in both Turkish and English that are known by heart by their fan base, including me. Their debut self-titled album Sattas was released in 2012 and they are gearing up to release their follow-up album this fall. "The second album will have more of a scent of these lands. We believe it will be an album in which we meet [in] the middle without distancing from reggae's roots," Sünear said.

I asked him if there was any connection between reggae and Turkish music to which he said: "There are in terms of rhythm and tune. But of course when we talk about Turkish music, there are a whole bunch of undertones [that make] it hard to find resemblances. In terms of rhythm, there must be some similarities to 'Ankara Havası,' but reggae is actually a style of music that has its own set of logic, especially when it comes to root reggae. When it comes to expression and the lyrics, our tales of love of nature, peace and romance could be said [is] where Turkish folk music and reggae meld."

I also asked Sünear about his favorite places to perform in Turkey. "As a group, rather than a specific venue, we enjoy playing [at] places where the audience [is] able to release themselves into the music. Nayah, is of course, [which is] Istanbul's reggae fortress. Of course, playing abroad is great fun and we tend to get a great response," Sünear said, adding that the Sattas crew have just come off from a short European tour with shows in Brussels and Dortmund, the latter being the Ruhr Reggae Festival last weekend.

They have a long line-up of shows coming up this summer. You can catch them Saturday night at the One Love Festival, then next Saturday, June 20, they will perform at Hayal Kahvesi. On June 26, they will perform at Nayah – Turkey's top and possibly only exclusively reggae club and popular expat hangout. This five-story venue off İstiklal Avenue has a rooftop performance and dance space that offers a relaxed and friendly spot to get your groove on. On July 4, Sattas will play in Ankara at Noxus and then head off for a short Aegean tour with performances in Kaş, Bodrum, Datça and Fethiye's Kayaköy. In August, they will be the first reggae group to perform at the mega Zeytinli Rock Festival, a four-day musical extravaganza along the shore of the Edremit Gulf.

Sattas has also shared the stage with many reggae legends, such as U Brown, Luciano, Don Carlos, Lutan Fyah and even The Wailers. I asked Sünear for an inside peak into the reggae scene in Turkey to which he said, "It is growing and it is great." Sünear said there are quite a few names that need to be mentioned, including some that paved the way for Sattas to soar, and he reeled off a list of Turkey's very own reggae 'selekta' superstars: Ras Memo, Da Frogg, Osman Ozman, Mehmet Yüzbasıoğlu, Selekta Firuzaga, 12metreküp and Beton Orman, to name a few. He also mentioned a number of reggae groups, including Komik Günler, Bosphoroots, Herbafrique, Koala, Hariçten Gazelciler and Hardfood.

Although I know the crowd is often filled with Turkey's resident expats – because I am usually one of them when Sattas takes the stage – I went ahead and asked Sünear if many foreigners come to their shows to which he said in the true reggae spirit: "Yes, our friends, our brothers come out, but I can't call them foreigners because those who love and listen to this music are distant from any borders; their hearts are all one."
Last Update: Jun 12, 2015 11:22 pm
RELATED TOPICS