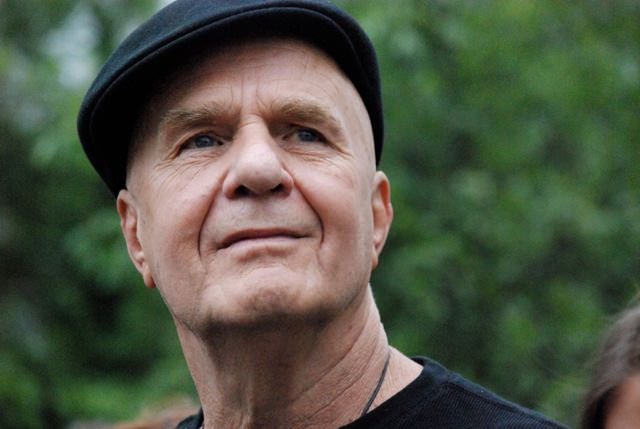 Dyer held annual tours, including Turkey, and he addressed people about self-discovery.
by Leyla Yvonne Ergil Sep 04, 2015 12:00 am

Wayne Dyer, the American self-help and motivational speaker guru who has topped bestseller lists and appeared on screen for the past 40 years, passed away last Saturday at the age of 75

With the death of Wayne Dyer last Saturday, the world has lost one of the most loved and popular self-help authors and speakers. Although the message released by his family said he embraced this next stage in life, I – like many of his audience – am reeling in the loss of such a great influence, who in his writing and talks would deliver life-altering concepts to improve one's reaction to life.

Dyer's first mega bestseller "Your Erroneous Zones," which was released in 1976, would go on to become one of the top-selling books of all time, never mind just in the self-help category, and spent over a year on the bestselling list. His breakout book has since sold nearly 35 million copies worldwide and Dyer had penned 30 other books, many of which have also made the bestseller list. Dyer had also been a regular fixture on American airwaves for the past 40 years and had repeatedly been on both Oprah Winfrey and Ellen DeGeneres' talk shows; he even presided over the highly publicized marriage of the latter. In 2009, Dyer also starred in the film "The Shift," which was centered on his theories surrounding the spiritual journey of transition from ambition to meaning.

Dyer was well-loved for his motivational speaking and books, which are geared towards helping people better their lives from a mental and emotional standpoint, and he had become one of the world's most well-known and loved public figures. Born in Detroit in 1940 and raised in an orphanage, Dyer had to overcome a lot of adversity, which he would share with his fans who gave him the moniker "the father of motivation." Dyer also worked significantly with Deepak Chopra, another guru in the self-healing category. Together they have countless recordings of life-altering talks, which I must admit has been quite helpful in my own growth and transition, especially to life in Turkey. Dyer's more recent releases "Excuses Begone!" and "The Power of Intention," among countless others, were also well-received and are just a few among the many of his publications that have been translated in multiple languages, including Turkish.

Like myself, many have embraced Dyer's words as a means in which to better one's self and ultimately live by, and some of his quotes will ring with me forever. "If you change the way you look at things, the things you look at change;" "How people treat you is their karma; how you react is yours;" "When you judge another, you do not define them; you define yourself;" "Be miserable, or motivate yourself. Whatever has to be done, it's always your choice;" "It's never crowded across the extra mile" and "When the choice is to be right or to be kind, always make the choice that brings peace" are just some of his inspirational gems.

Dyer passed away in his sleep on Saturday in Maui, Hawaii, at the age of 75. He had been diagnosed with lymphocytic leukemia in 2009, but had continued to tour and appeared dynamic and healthy. A statement released by his family read: "Wayne has left his body, passing away through the night. He always said he couldn't wait for this next adventure to begin and had no fear of dying. Our hearts are broken, but we smile to think of how much our scurvy elephant will enjoy the other side."

A lesser known fact: Dyer also used to host an annual tour, which would stop in Turkey as well. On this tour, he would deliver talks to the thousands that would come out each year to be a part of this very special trip, or as he would call it, "A spiritual journey of self-discovery."

This October was going to be no different, as Dyer was set to make a stop once again in Ephesus to visit the house of the Virgin Mary as part of a series of destinations on this year's The Holy Land and Beyond Tour. Whether the tour will continue without him is unknown, but as a fan in Turkey of his work and insight, I must say it is a great personal disappointment to have missed such a unique opportunity to hear him speak in person at some of Turkey's most impressive historical sites. The only reconciliation is the fact that in 2014, his lecture series "Modern wisdom from the ancient world: A spiritual voyage through the Mediterranean with Dr. Wayne W. Dyer," was released, which has footage of Dyer during his tour giving enlightening lectures in some of the world's most breathtaking ports and sites, including Istanbul, Ephesus and the House of the Virgin Mary.

Dyer will be missed but his words and his legacy will live on. For Dyer to have placed such importance on Turkey and this region's history makes me proud of my adopted homeland. May he continue to be a beacon of light in this life and the beyond
RELATED TOPICS