The best of Bodrum: The top-10 on the Turkish Riviera 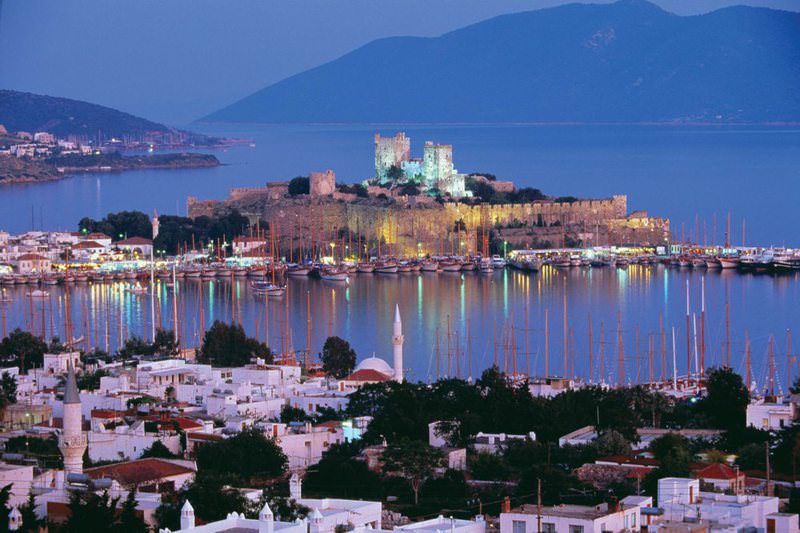 Located on Turkey's beautiful southwestern coast, Bodrum is not just popular for its glamorous beaches, but also for watersports, tranquil seaside restaurants and entertaining music and shopping venues

Bodrum has always been one of Turkey's top touristic destinations and this summer has been no different. However, Bodrum is fast developing into a mini metropolis along Turkey's turquoise coast, and therefore the scene is constantly changing. Regularly referred to as the "Turkish Riviera," and set to be packed on this Qurban Bayramı (Feast of Sacrifice) holiday, also known as Eid al-Adha, which is just two weeks away, here is a list of this year's top 10 "best of the best" compiled from the views of expats, local residents and visiting Istanbulites alike as well as tried and tested by yours truly.

Situated in Yalıkavak, Xuma Beach Club has long been the most popular place to spend the day lying out on the grass under trees along the sea, only to turn into one of the most bumping night scenes with daily sunset parties and regular performances by popular musicians including resident expat rocker Allen Hulsey.

The ultimate destination for windsurfing and stand up paddle boating is the Lena Erdil Windsurf Center in Ortakent – after all, it is owned by one of Turkey's leading Women's Slalom windsurfers who is currently in second place in the Professional Windsurfers Association (PWA) world standings. They also offer catamaran and laser sailing outings and can arrange all sorts of watersports, such as water skiing and wakeboarding.

Owned by Arda Önen, a local windsurfer who opened the space 15 years ago and is now well on his way to creating his own signature sound with the grooves that take over this beach club at night. During the day, it operates as a seaside cafe and surf club. At night, however, the plush, white couches become sought-after property as the bumping crowds arriving at all hours spill over onto the beach.

This category is a tough one with outdoor staples such as the Bodrum Castle and Amphitheater as well as the Turgutreis D-Marin regularly hosting top-notch acts, in addition to Eklisia, an ancient church hosting classical music performances. However, Mandolin, the newer sister to its older Kule Bar, is the bigger and better version set along the shore and capped with views of the castle.

5. The best detox: The LifeCo

For years now, The LifeCo Bodrum has been the ultimate place to detox with all sorts of packages specially geared towards individuals. This year, this popular detox center has taken over another hotel right on the beach in Türkbükü, making this new space with 14 rooms their sixth center. Like other LifeCo venues, this one will also be serving up exclusively vegan and raw-heavy fare and has a lengthy list of holistic practices and services available.

Set in the hills of Karakaya overlooking Gümüşlük, this newer retreat center has a jam-packed program of workshops on the healing arts, such as the upcoming Osho Meditation and Healing Festival. Rooms are in ecologically built traditional stone houses, the food is all freshly sourced and there is even an extensive lap pool set in the hills.

The Mandarin Oriental opened last year in Cennet Koyu, aptly named Paradise Bay, and is fast becoming one of Bodrum's most luxurious hotels rivaling the Amanruya in neighboring Mandalay Bay for having the most pristine and tranquil seaside location. On the other side of the spectrum, Victoria's, a beach and horseback riding club near Gümüşlük, is one of the best deals for an excellent accommodation option on the sea with all of the amenities you could imagine, including horses and Cuban music nights, for a reasonable price.

Bodrum now has some of the most acclaimed luxurious restaurant chains in the world with Nobu for Japanese, Cipriani for Italian, Sait's for fish and Nusret's for meat. For more affordable dining options that will not empty your wallet, try the fish restaurants on Meyhaneler Sokağı, the street behind the fish market in Bodrum, while Marina Bistro as an excellent option for meat, Musto's is for a bustling, Cihangir-type cafe and Avlu is a more boutique-type restaurant set in an old stone building. Arka Pizza, however, is undoubtedly Bodrum's greatest find and by far deserving of the title the best pizza place in town. Set in one of the side streets off the main drag, the pizza is top notch and is as if it is straight from Italy.

9. The best breakfast or brunch: Havva Ana or Bitez

There is a new trend of village breakfast proprietors serving up their own produce, cheese and pastries, yet Havva Ana, located in Yalıkavak, was the very first to start the trend. In fact, the owner was even been to Italy with Slow Food to learn how to make börek and other Turkish specialties. Although Havva Ana was the first, Panorama Passanda, located on the other end of Yalıkavak, offers stunning views while Değirmen, aptly named after the windmill it is housed in, sits atop a hill overlooking Yalıkavak Bay. Meanwhile, Parpalı on the same road heading to Bodrum, is a breakfast place that serves up Black Sea-style fare. If, however, an English breakfast or brunch buffet is more your fancy, then head to Bitez, the Sunday morning brunch mecca for expats who then make their way to the Bitez Flea Market, which has everything and anything you could ever want – second-hand style – up for sale.

Bodrum now rivals nearly any city with its shopping centers that have everything imaginable available. Midtown, however, is especially impressive with movie theaters, countless restaurants and huge specialty stores such as Decathlon. The Bodrum strip remains the number one stop for souvenirs, leather bags, sandals or Turkish trinkets; however, Gümüşlük offers the best selection of homemade artistic jewelry and crafts, and has ample beautifully lit up stands where many of the artists make the pieces on display by hand. Bodrum also has a number of weekly markets that are all wonderful shopping opportunities, but the biggest market on the peninsula is still the Saturday Turgutreis market.
RELATED TOPICS