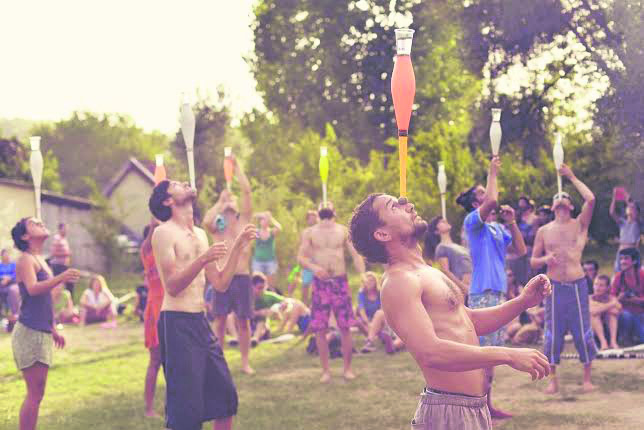 From Oct. 5 to Oct.11, the Sundance Camp in Tekirova, Antalya will be hosting Turkey's biggest juggling convention yet, with J-Fest entering its 10th year

J-Fest is an annual juggling convention held in a nature oasis along the Mediterranean aptly called Sundance Camp, making it the most amazing experience to enjoy watching and joining jugglers from all over the world all while relaxing in one of the most beautiful places on earth. Situated in the neighboring cove to Phaselis, once an ancient Lycian spa town, Sundance is also a very special place to rejuvenate. Where the forest meets the sea, animals such as horses and geese abound, and accommodation could be an adobe home, wooden bungalow or even a tree house; Sundance is already an excellent secret hideaway retreat. Now, with the addition of hundreds of jugglers from all over the world, it will literally be a physical performing arts paradise, with pins, poi, devil sticks and diablos galore.

I had the opportunity to speak with Deniz Soyarslan, one of the founders of J-Fest, to find out how it all began and how Turkey hosts one of the world's coolest juggling festivals right on the sand and sea in Tekirova, Antalya. Deniz is one of those people who shines with the beautiful light of having found her calling and purpose on earth, which reflects through her shining golden hair and blue eyes, and spirit that exudes so much larger than her petite self. "I was first introduced to juggling by tourists at Butterfly Valley in 1998 with my friend Enis Yuğnak. Up until that point, I had never met a juggler outside of a circus and I was completely taken away. Later, researching on the internet I realized how widespread juggling was all over the world. That's when we began developing ourselves. In 2000, Enis Yuğnak attended the European Juggling Convention for the first time and came back with a bunch of amazing stories and photos. I would say it was during that time when the first seeds of J-Fest were planted," Deniz explains.

"Later a lot of us started going to different festivals all over the world and gained experience and met people. When we finally believed that there would be enough participants and interest as well as with Sundance Camp, a place that we always envisioned the festival would be held at, offering their infrastructural support, we embarked on holding a juggling festival, and suddenly our college-years dream had become a reality," says Deniz.

J-Fest was held for the first time in October 2006. "At that first festival, we made a promise to ourselves that we would continue the festival each year and always be volunteers. This promise has brought us to our 10th year," Deniz adds.

Born in 1977 in Istanbul, Deniz first discovered her passion for juggling she was a student at Bilkent University studying archaeology and art history. After graduating in 2001, she went to England to do a Master's degree in underwater archeology at Bristol University. "In the first week of school I immediately became a member of the school's juggling community. Two days later, they took me to the Juggling Festival in London. The experience I had there affected my life deeply. It was as if I was a child that had never seen a toy and was suddenly left in a room filled with them. For two days, I attended workshops and performances nonstop. The festival made me question my life and my choices. I started discovering myself and after that amazing experience, I started to go to festivals held in different cities throughout England," Deniz explains. A year later, she had dropped out of the Master's program she was in and tried out for and won a spot in the circus school in Bristol. "My last two years in England were spent in circus schools and I became an aerialist, a Cord lisse performer to be exact, and worked professionally as a trapeze artist up until 2011. Now however, I live in nature and spend my time dancing and creating modern art," this fairy-like beauty tells me.

I asked Deniz if there were jugglers in Turkey when the festival first started to which she says that as far as she knew not really, along with Enis Yuğnak they established their college's first juggling community. "At that time there were maybe 20-25 people in our circle. But, slowly more and more people became interested. In 2006, there were 300 attendants at the first-ever juggling festival, however only 60 of those were actual jugglers and even half of that number were foreigners. There were only 17 pins at the whole festival and only five Turks that were able to juggle with them," shares Deniz, emphasizing "These numbers have changed drastically. We now have hundreds of jugglers and countless pins and juggling gear."

I asked Deniz how many people they were expecting to come out this year, to which she said, "Because this is the 10th year, we feel it is going to be even more crowded than in past years. Over the last few years, we have had 350 to 450 participants but this year, we believe we will be over 500 people." I also asked Deniz how many of those numbers are foreigners who fly in from abroad for the festival, to which she said that maybe 40 percent of the participants at the festival are foreign, however the number of Turkish jugglers continues to grow each year, she adds.

I also asked Deniz what kind of juggling should be expected, to which she said, "Pins, balls, poi, rings, hats and basically anything that comes to mind that one could throw up in the air and then catch. Our festival is referred to as a juggling convention; however it actually encompasses all of the circus arts. This is a gathering of a wide variety of talented people such as trapeze artists, acrobats, clowns, musicians, dancers and so much more. We never know beforehand what is going to happen or who is going to show up. Perhaps one of the most important characteristics of our festival is the fact that for 10 years now, it has happened spontaneously. As the festival team, we provide the infrastructure and draft up a schedule and our amazing participants fill it with their juggling workshops and performances they can hold anytime they want. We believe that when a group of this many creative and energized people come together they always create an amazing festival," Deniz says.

I also asked who else was involved in organizing this festival, to which she said that over the years the people they have met through the festival have embraced it themselves. "J Fest is a volunteer organization of jugglers for jugglers. Anyone who chooses to take on responsibilities during the preparation of the festival are part of the organization. In addition, those who pay the entrance fee are also the festival's sponsors and therefore in a sense owners of the festival themselves," she adds.

The J-Fest Turkish Juggling Convention will be held at Sundance Camp in Tekirova, Antalya from Monday, Oct. 5 to Sunday, Oct. 11. The entrance fee is TL 150 ($49) for adults, TL 100 for students aged 16 to 19 and free for those 15 and younger. The fee includes camping out in your own tent on the grounds, which will have three separate domes set up as a 24-hour juggling space, entrance to all workshops and performances. There will also be stands for participants to purchase their own pro juggling gear.

Sundance Camp is a very special place, situated in the neighboring cove to Phaselis, an ancient Lycian town known for its Roman baths that lies right along the Mediterranean. Sundance Camp itself is a nature oasis, where the forest meets the sea, sweet and salt water meld and beautifully designed ecological buildings made out of wood, adobe or stone are available for comfortable stays or there are also tree houses with shared facilities for the more adventurous soul. The food is also a wonderful selection of fresh locally sourced products. So, experience Turkey's juggling convention in style in a great way to close out the summer and witness the pins, poi and fire-spinning pros in action in a spectacular setting that is Sundance! For more info, check out www.j-fest.com and www.sundancecamp.com
RELATED TOPICS