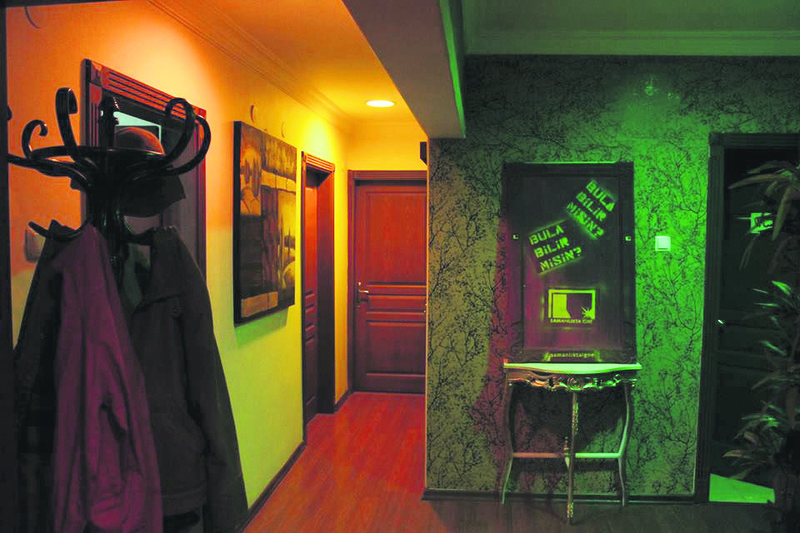 While room escape puzzles are all the rage now in Turkey, two new real-life adventure games offered in English take it to the next level with a murder mystery challenge in Ankara and the chance to play out being a spy in Istanbul

"Secret Agents" and "Needle in the Haystack" are two innovative adventure games along the lines of room escape or scavenger-hunt genre games created in Istanbul and Ankara by two former Turkish expats, who have used their experiences abroad and English to make these the perfect challenge for anyone, including expats.

Özgehan Omağ, founder of Omactivities, which stands for Omag Motivational Games, has not only created his own real-life spy game, aptly titled "Secret Agents," but also provides information and reviews of other adventure games on offer in Turkey on his website. Özgehan started up his website after returning from a spell as a Turkish expat in Canada where he learned about geocaching, a sort of GPS treasure hunt and other adventurous activities. Not only has he brought geocaching to Turkey in a big way but now he has also combined his orienteering past and room escape experiences to create a real-life spy game where people get the chance to have the secret agent experience as a fun adventure in Istanbul.

"Games were always in my life. For me, games are a way of learning and entertaining. My friends began to ask me to organize other events for themselves. Then I met my wife who is Canadian and when I visited Canada, I randomly discovered Geocaching. I can say if you are interested in games they somehow find you," says Özgehan. "I wanted to explain all of these events and activities, and decided to start my blog. I began to give information about geocaching in Turkish as well as in my interests in sailing, mountaineering, and riding my motorcycle. These are all outside activities that I describe on my website and now the most exciting game we offer is Secret Agents Istanbul, which gives people the chance to be an agent and to complete a series of missions.

There are three versions of the "Secret Agents" game: Cargo, Field Mission and Marathon. The games progress in complexity so it is advised you start in order but certainly not mandatory. Cargo is the perfect starter game and involved just that: a cargo delivery to your door of tasks you are challenged to complete in a 60-day period. In this version, you can play alone and in any location of your choosing."The next stage would be to play Field Mission, which is the most popular and is played as a team. In this case, team-mates are assigned a mission and meet with one of the experienced agents this one is the most popular and is played as a team. This time you and your team-mate will get your first field mission. Your team will meet with one of our experienced agents in a crowded place (Taksim or Kadıköy) and they will give you a short briefing and your field kit. This is a timed mission at 90 minutes, giving you the experience of being an agent for an hour and a half," explains Özgehan.

The next stage if you are definitely ready for a bigger mission and to meet other "secret agents" is "Marathon." "The Marathon game will make you totally paranoid and suspicious of everything and everyone around you for 15 days as all participants try to complete as many missions as they can to finish. In this game there are many different kinds of duties for agents. Some of them can be solved at your desk, for others you will need to be outside and you will need to work as a field agent. You will also have to learn some tricks for following another agent without being noticed and also to avoid being followed by another agent. Participants receive points for every mission they are able to complete. The agent who acquires the most points wins the marathon." Özgehan shares, adding, "In this game, you will take on another identity for a couple of weeks and during that time you will truly feel like you are a real agent!"

I asked Özgehan what sort of tasks were involved to which he says his team doesn't like to spoil the surprise, but for those with any apprehension, that is why they suggest playing the games in order. You won't have to walk too much or run if you don't want to, however you may have to carry a toy (NERF) gun, but make sure to remain discreet as the whole point of being a spy is to not draw too much attention.

Özgehan tells me the game is available for anyone over 18 and can be played in English or Turkish. Asking who plays the most, Özgehan says, "In general, people play the game and then tell their friends about it so it's more word of mouth and of course the OMA team play as actors. One surprising factor is that women have shown even more interest in the game then men, who love it too, and embrace role-playing as an agent to an even further degree. Regardless, everyone enjoys shooting others with their toy guns and can get shot themselves at any moment, which can be frustrating but everyone's imagination soars when pretending to be an agent," says Özgehan. Visit www.omactivities.com for more info on Secret Agents, geocaching and all other sorts of outdoor adventure games.

Needle in a Haystack

Samanlıkta İğne (Needle in a Haystack) is a real-life escape game, created by a former Turkish expat in Ankara with a social awareness emphasis. In addition to being a room escape game however it is also a murder mystery of sorts. The game is simple and consists of a flat filled with puzzles and riddles. As a group of two to five people, you spend 60 minutes in the apartment solving puzzles in order to get out. The way this escape game differs is the story behind it. Speaking to Çağdaş Gültekin, the creator of Samanlıkta İğne, he tells me that his intention when he devised the game was to send out a message. "I believe that as individuals we have a responsibility to share our knowledge about everything we know. So I created a scenario that I hope helps people improve their awareness of global issues. The scenario in Samanlıkta İğne is centered around a mad scientist who finds a sustainable energy source he is about to reveal to the public when he is suspiciously murdered. Oil companies are after him and his invention, which he has shared with a group of activists. The aim of the game is to figure out his invention to save the world and to share the knowledge with humanity and not allow big corporations to control society as they see fit.

"The venue consists of several rooms and is designed as house/laboratory for a scientist. Although the game takes place in a scientist's house, participants in the game do not need to have any prior scientific knowledge. The game does not require any physical power or such. The only thing you need to do is solve puzzles which requires analytical thinking, deduction and awareness," explains Çağdaş, who has also made the game available in English. Having grown up in Ankara, Çağdaş moved to London in 2007 to study, however ended up living there for seven years during which time he realized he wanted to become a crime novelist. He is currently working on a crime novel trilogy and developed the creative storyline for his real-life escape game that is well worth checking out at samanliktaigne.net.
RELATED TOPICS