It's time to pick mushrooms in Turkey 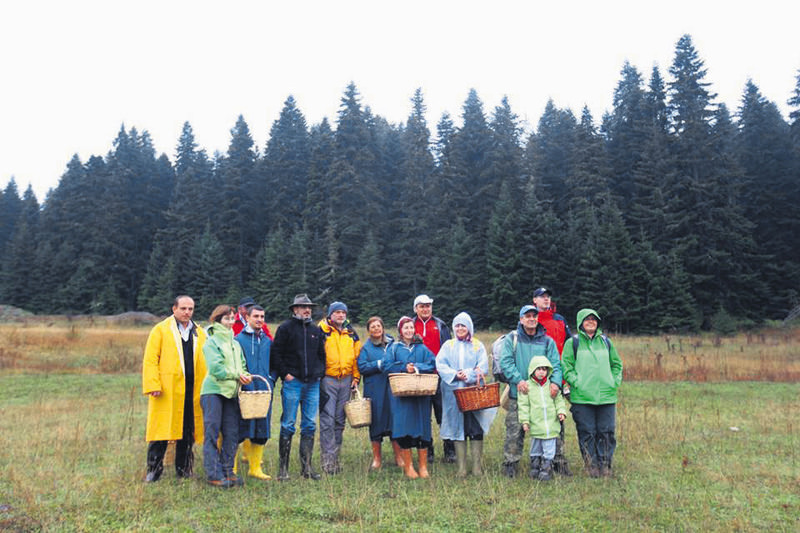 Jilber Barutu00e7iyan will go to Kaz Dau011flaru0131 village in Edremit to teach locals and those interested how to safely identify mushrooms and how to sell them.
by Leyla Yvonne Ergil Oct 17, 2015 12:00 am

As mushroom season begins in Turkey, three different mushroom gathering events will take place in different parts of the country in the coming weeks led by Turkey's leading mushroom expert, Jilber Barutçiyan. The first event will start on the shores of the Göksu River in Ağva on Oct. 18, while the others will take place from Oct. 24 in Kastamonu and from Nov. 2 in the Mount Ida region

With the rain and the cooling weather comes the start of mushroom season, which Turkey, in all of its glorious nature, excels at when it comes to collecting. However, the vast variety of mushrooms that abound in this paradise for fungi has yet to be discovered by its own nationals. Turkey's leading mushroom expert, mycologist Jilber Barutçiyan, is changing that and introducing the world of mushrooms to growing enthusiasts in destinations throughout Turkey. You can catch him leading talks and walks in three very different and beautiful locations throughout the country this month, starting off with a Sunday mushroom gathering event in Istanbul's Ağva region. The next weekend, Jilber heads to Kastamonu for a two-day mushroom extravaganza, which will include a seminar, mushroom collecting and the preparation of mushroom dishes. And the following week, Jilber comes to Kaz Dağları village in Edremit to teach locals and those interested how to safely identify mushrooms and turn collecting into a trade.

Jilber is Turkey's leading mushroom specialist, and the only one sharing his knowledge and teaching people how to identify mushrooms safely in courses offered throughout the country. Jilber has also penned Turkey's first book on mushrooms and is currently preparing his second. He actually studied archaeology in Turkey before moving to Switzerland where he first started out as an amateur mushroom specialist but has since received an accolade from the Swiss Ministry of Health. This very special certification, which is given solely by this establishment throughout the world, gives Jilber the accreditation to guide mushroom picking, provide certification for the mushroom trade and train mushroom pickers.

Jilber is also fluent in French and speaks English, so there are many avenues for any expat to learn from the mushroom master himself. Courses usually involve a half-day theoretical discussion and a day of picking mushrooms out in the field. The main aim of the course is to provide a basic understanding of mushrooms, protect against picking any dangerous species and allow for the collection of different and delicious varieties that people can take home and prepare themselves – all of course while enjoying Turkey's magnificent nature.

I had the chance to speak to Jilber about his upcoming schedule of informative mushroom walks, and asked him to tell me a little bit about Turkey and its mushrooms. "Turkey just happens to be a paradise for mushroom collecting, and there are types that can't even be found in Europe – and if so, very rarely. There are truly a wide-variety of mushrooms here, over 12,000 types to be exact," Jilber said.Jilber said mushrooms are not really well-known in Turkey and that there are only a few varieties consumed among locals, and added that it was nonexistent in local cuisine of the past. Hopefully, Jilber will be changing all of that, though. He has penned Turkey's first book on mushrooms, "Türkiye'nin Mantarları 1," which includes the Latin names for the mushrooms found here, and is currently compiling his second book that will include even more species and photographs as well as an English version. Even when we went out to pick mushrooms together, they were recording and photographing new species for the book. Moreover, Jilber told me he and his team go out to try and discover new species almost every day.

I asked Jilber if interest was on the rise in Turkey in regards to mushrooms and the vast variety that exist here. "Of course, interest is on the rise. People are looking for new interests and new tastes. Mushrooms have a significant presence in European cuisine, and more and more people are discovering them. There is truly wide interest, and many people come to learn how to pick mushrooms for themselves to use in various European cuisines. Physicians and those in the medical trade are also among the attendants, while others simply want to learn how to pick mushrooms so they can turn it into a trade. Last year, there were 200 participants on the Ağva walk, and this year we are hoping to see at least that number once again."

I asked Jilber what Ağva was like in terms of mushroom picking. He said it is an extremely fruitful area for mushrooms, as some of the most valuable types of mushrooms can be found there. When I asked for names of the types of fungi they come across, Jilber said: "There will definitely be a few types of porcini, maybe King Bolete and even the coveted Amanita Caesarea, known in English as Caesar's mushroom. This type of mushroom could sell for up to 150 euros a kilogram in Europe where it is considered extremely valuable."This led me to ask where in Turkey some of the best places are to find mushrooms. He said there are so many wonderful places here. "As for the best areas … Istanbul is actually a really interesting region as is the Black Sea and the Toroslar region, and these are the areas we work in continuously." Jilber will be leading a Mushroom Walk this weekend in Ağva, located in Istanbul province's Şile district. This full-day event will start on the shore of the Göksu River, where participants will meet up at 10:30 a.m. on Oct. 18 in front of the Ağva Tourism Office. Participants are encouraged to arrange their own accommodation in the area should they choose to stay the night, however, Şile is also an excellent day-trip destination. For more information on this Sunday's walk, check out Explore Ağva's website and Facebook page.

The following weekend, Oct. 24-25, Jilber will be leading a two-day course on mushrooms and mushroom collection in Ballıdağ, Kastamonu. Based in İksir Resort Town, a picturesque and spacious natural resort in the plains of the Daday district of the Black Sea province, "This program is wonderful as Kastamonu is a very rich area in terms of mushroom collecting. We will also prepare special mushroom dishes in the evening," Jilber said. İksir, which encompasses a 500,000-square-meter area, also offers a number of interesting outdoor activities, such as horse riding, and also has an in-house hammam, pool and sauna. Check out www.Iksirresorttown.com for more info.From Nov. 2-3, Jilber will be in the Mount Ida region, Edremit in the Balıkesir province to be exact, for a very special two-day event in which he will be training locals from Mehmetalan village, as well as anyone else who would like to join, on how to identify and safely pick mushrooms. This effort to provide skills locals could turn into a trade is a commendable one and will be a unique opportunity to learn first-hand from the mushroom master himself as well as from locals who know their region's nature so well.

The event is being organized by Emir Saltuksoy, owner of Saltuksoy Guest House and a Mehmetalan local, who told me this will be a unique opportunity to inform villagers of the rich treasures that surface in their forests as well as to promote this oxygen-rich region for natural tourism. "Villagers only know of four-to-five types of mushrooms, but in Turkey there are thousands. We want to inform villagers about mushroom collecting so they can pick and preserve mushrooms themselves, thereby contributing and adding color to their economy," Emir said. For more info, visit: www.altuksoy.com.
RELATED TOPICS