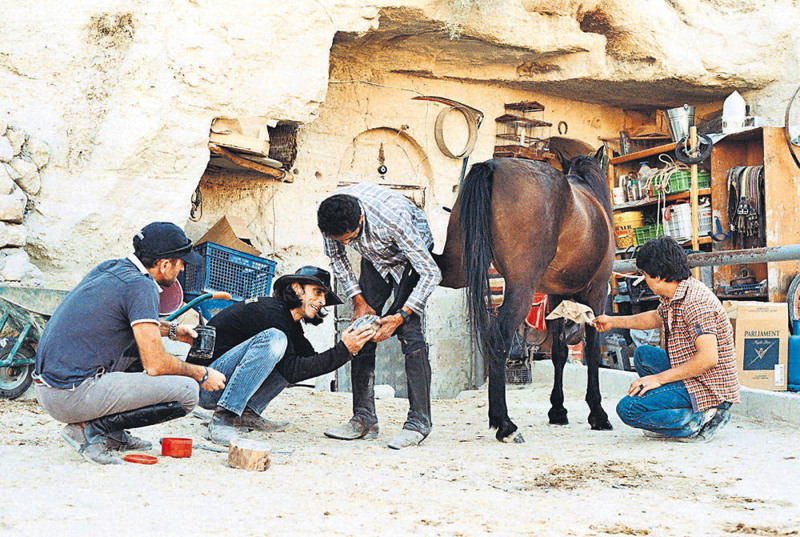 On the Dalton Ranch in Cappadocia, Turkey's own resident ‘horse whisperer' Ekrem İlhan wrangles wild horses from Mount Erciyes that he trains for guests from all over the world to ride in the mystical mountainous and fairy chimnies

Situated on the road to the open-air museum in the heart of Göreme, The Dalton Ranch in Cappadocia has been offering horseback riding tours from day to full moon and multiday rides that take you on a tour of the Taurus Mountains and the spectacular geography known as "the land of beautiful horses." To explore the terrain like our ancestors used to and to discover areas inaccessible by other forms of transportation, horseback riding in Cappadocia is a must once-in-a-lifetime activity and Ekrem İlhan, the charismatic Turk known as the country's own resident "horse whisperer" is the very man to take you on this journey.

I had the chance to talk to Ekrem İlhan, the man behind Dalton Ranch, who has had documentaries and TV shows galore done on him and the two dozen or so horses at his stud ranch. With an impressive mane himself, Ekrem is one of those people you don't easily forget. A native to the Cappadocia region, I asked Ekrem to tell me his story, to which he said he grew up surrounded by horses and donkeys. "When I was a kid my bicycle was a donkey,' Ekrem tells me, sharing, "When I grew a little older, my grandfather bought a horse and I immediately began taking care of it." Ekrem adds that his grandfather's brother was a horse dealer and so he learned from watching him and says that he was interested and so was always paying attention to how people would treat their horses once they got them.

As for how Dalton Ranch was formed, Ekrem tells me that he began to collect horses himself and when he would befriend tourists he would take them out on rides for free and everyone loved it. "That's when I decided to make this a business," Ekrem tells me adding, "I realized, if I were to take more people on tour, it would help me manage the expense of having more and more horses and so we opened the ranch about seven years ago."

I also asked Ekrem how Cappadocia got the name of "Land of the Beautiful Horses" to which he says there have always been beautiful horses in the region and so now that is what the area is known for. "Historically, the Romans were very interested in our horses during times of war, which is what this region became famous for. Riding here is special because of the amazing landscape with lots of rocks to climb. However, our horses are used to this area so they can climb and descend with ease," Ekrem adds.

"There's a rumor you wrangle wild horses from Mt. Erciyes," I asked this soft-spoken yet loud character of hosts. "Yes," he tells me, "There are more than 300 wild horses up in the mountains and I go catch and train them. They are good, strong horses and able to climb very well." I asked this expert horse wrangler and trainer what sort of tour options they offer here at Dalton Ranch, to which he tells me rides can take anywhere from one hour to a five-day camping tour. As for some of the names of where they take visitors horseback riding, Ekrem tells me, "We ride around Cappadocia's valleys. Namely the Rose Valley, Red Valley, Sword Valley, Love Valley and, well, all of them. On longer tours, we go to other small villages in the area such as İbrahimpaşa and Mustafapaşa. We also have a camping tour in the Taurus Mountains; however, this tour is for experienced riders. We visit the lakes up in the mountain and the Kapuzbaşı Waterfall," Erkem said. I ask him if first-time riders could come to the ranch, to which he tells me that, "Yes, everybody can come. We do take more experienced riders out privately if they want to gallop for example, but group tours normally go slowly. We ride according to the client's abilities and we take lots of first-time riders out."

I asked where people stay when they come for rides to which Ekrem says that, the customer arranges that on their own, however the Dalton Ranch will send a car to pick customers up. As for the full-day and camping tours all the food is provided by Dalton Ranch and accommodation is spent in tents or caves on the route. They still ride on nice days in winter, however the overnight trek into the mountains is best done before the snow comes and the trails become icy and the nights too cold to camp out, Ekrem adds. The five-day tour on horseback through the mountains and picturesque fairy chimney landscape is certainly one for my bucket list, but many an expats before me have grown fond of Dalton Ranch and have stayed on as tour guides and riding assistants.

The Dalton Ranch regularly hosts expat horse lovers who help give tours and Gülbahar, a lovely cowlady who hails from Holland, is one such expat that is living out her love for horses in this stunning geography. Growing up in Holland, Gülbahar fell in love with horses at a young age and first began riding at 11. Eventually she had her own horse for nearly a decade. But then, 10 years ago, she grew tired of the office job she had in the Netherlands and decided to take a break in Turkey. Instead she fell in love with Cappadocia, she tells me and went back to Holland to pack up all of her things and ended up renting a house here. "For a few years, I didn't have the chance to be close to horses. I was so busy trying to build a life here and struggling to understand and adapt to the culture," Gülbahar says.

Eventually she learned Turkish, "which helped a lot" in structuring her life, she says however, still really missed being near horses. She had heard of Ekrem and would see him touring his horses in the valley and so one day when she was feeling a bit down, her friend took her to Dalton Ranch so she could at least hug a horse and feel better. Instead, Ekrem offered her a horse to train for an upcoming endurance, long-distance ride. "I felt welcome in the farm and ended up buying one of the horses for myself and would come every day to take care of it, hang out, meet people and join in the tours."

Gülbahar said that she would observe the Turkish way of dealing with horses, which she adds, differs greatly from the Dutch. "In Holland, horses are more like pets, while in Turkey they are more strongly handled. In the beginning, similar to how I felt arriving in Turkey, it was like entering a man's world. However, in time, I adapted and now I feel accepted both in the country and in my position as a cowgirl. When people ask me why I moved here, I always say 'just look around!' Being here every day is a chance for learning and discovery. It might not always be easy, but after every challenge I become wiser and stronger," says Gülbahar, emphasizing that today, she is a happy woman and very proud of the life she lives here.

Discovering the Cappadocia terrain on horseback is one of the most picturesque, athletic, eco-friendly and historical ways to experience this magnificent geography and sites of which may otherwise be inaccessible and taking a tour with Dalton Ranch has become par for the course for those foreigners who have heard of Ekrem's name and fame as Turkey's very own 'Horse Whisperer.' Check out www.cappadociahorseriding.com/ for more info.
RELATED TOPICS