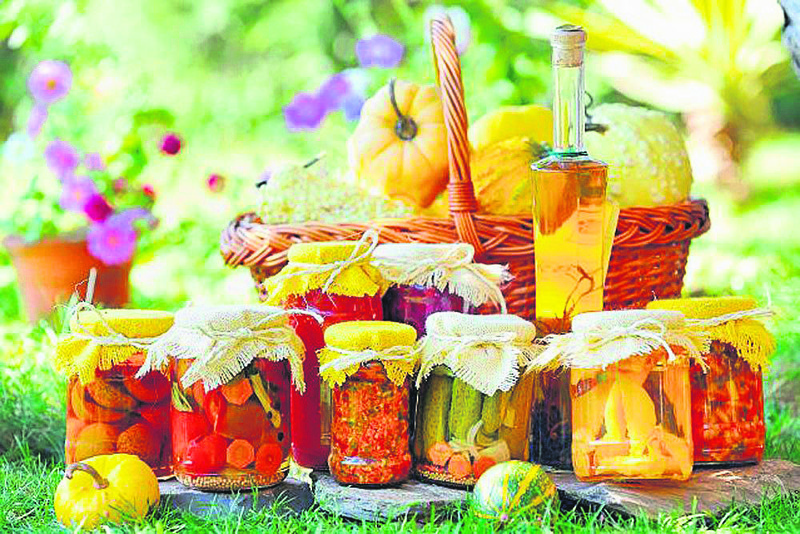 For a cozy night in or hosting surprise guests properly, make sure your pantry is filled with these five Turkish staples that will make your life easier and certainly more delectable

Every year in the months leading up to winter, Turkish women and their households band together to prepare the stock that will fill their pantry over the winter. Although these days you can find many of these products in local markets and specialty shops, knowing what goes into the preparation involved could give you an insight into Turkish culture and certainly a taste of Turkey's cuisine.

Every autumn, Turkish villagers and city dwellers alike will try to continue the tradition of preparing their own pantry for the winter. Having learned from their mothers and their mothers from their mothers, there are a number of Turkish staples items rendering painstaking preparation that are indispensable to the Turkish kitchen.

Recently chiming in with a fellow expat on the trials and tribulations of trying to meet the Turkish expectations of preparing an impressive table for popover guests, we came to the realization that it was the abundance of already prepared delicious foodstuffs that made improvising a spontaneous dinner so easily plausible. Although Turkish housewives tend to while away the fall months preparing the ultimate winter pantry, if you are a novice you can easily fi

nd the wares of other's efforts for sale at local markets and in specialty shops. Each item can constitute a dish on their own but are also intrinsic ingredients to making a delicious Turkish supper.

Tarhana is a dried mixture of fermented grain or flour, vegetables and yogurt or milk that is turned into a soup. Easily considered to be one of the Central Asian Turks' first-ever instant soups, the history of this culinary delicacy extends to records in 11 BC but is believed to have existed all the way back to the 100 BC. Popular in the Middle East, each country has their own distinct way of preparing and serving the dish. In Turkey, tarhana is made from cracked wheat or flour, yogurt and vegetables, namely equal parts onions, tomatoes and red peppers, yeast and spices that are left to dry for five days, although periodically kneaded each day in between with, the final product run through a sieve. The salmon-colored crumbly flakes that remain are kept for months to be used as the basis for this soup, easily considered one of the favorite comfort food of the Turks.

Similar to an instant soup mixture all you need to do is add some tomato paste and spices and the crumbly tarhana blend and you are good to go. One would be hard-pressed trying to actually order it in a restaurant though as it is very much one of those pantry items used at home, and for this upcoming cold winter an indispensable one at that.

Salça: So much more than a sauce!

Salça, or in other words paste, whether it be tomato or red pepper, is undoubtedly an intrinsic element of the Turkish kitchen. Used in nearly everything, there are three main types of Salça, or paste, namely tomato, red pepper and sweet red pepper paste, each of which can be cooked by boiling down with salt or by leaving it to dry in the sun for a few days. This paste is then used year-round to flavor nearly any sort of dish you can imagine and can also be served in a bowl as a dish within itself to dip bread into. Prepared at the end of summer when tomatoes are fully ripe, many households will also fill jars of chopped tomatoes at their prime, by simply adding salt to keep it preserved. Although harder to track down, as this is an indispensable ingredient in Turkish cuisine, it is possible to find homemade tomato paste and its red pepper varieties at local markets and specialty cheese shops.

Another family favorite you won't find in restaurants are the handmade noodles referred to as erişte. Prepared using flour, egg, water salt and milk, the dough is rolled out and then cut into short ribbon-shaped noodles, which are dried in the sun or the oven for a day, only to be ready to be served up at any moment by simply boiling in water, sautéing in butter and adding crushed walnuts or crumbled cheese. The noodles themselves can also be flavored in tomato and spinach varieties. While preparing these noodles on your own may be a daunting task, you can easily find them available at local farmers markets or in shops and it is certainly one of those easy to whip-up dishes that equates to Turkish comfort food pleasing any guest.

Turşu: Pickles on every table!

Have you ever noticed that pickles in some shape or form, tend to turn up on your table in Turkey with surprising frequency. In fact, traditionally a table is not considered complete without them. There are even shops that specialize solely in pickles and any type you can imagine, unripe melon, cranberries and even plums. The most popular pickles however are gherkins, peppers, beets, cabbage, carrots and green tomatoes. While tasting the wide variety of pickles on hand at said shops is just as exciting as taking a gulp of their "Şalgam Suyu," the bitter purple juice of pickled red carrots and turnip, pickles are a delight that can easily be made at home.

A regular staple in any Turkish pantry, pickles can actually be made year-round, the only requirement being that the vegetables and fruits used are as crunchy and fresh as possible. There is a wide variety to the preparation of pickles, but in general, the vegetables are left to sit for two weeks in a jar filled half with rock salt, a little sugar, lemon or vinegar. While dried chickpeas are added to enhance the fermentation process, garlic, celery stalk, boiled eggplant or spices such as coriander, dill, bay leaves, mustard seed or parsley are added to impart flavor.