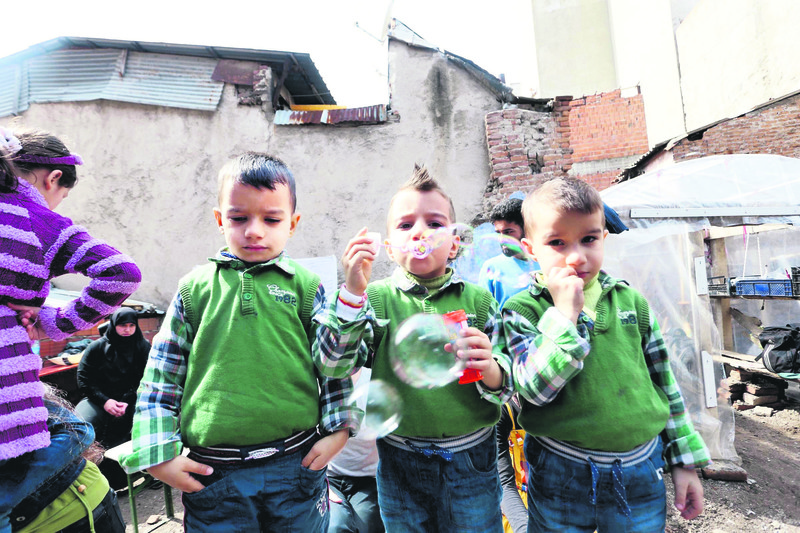 The Refugee Volunteers of İzmir (ReVi) is a group of volunteers that has grown over the past few months and consists of volunteers from all over the world, aiming to assist displaced Syrian families settling in İzmir.

İzmir, the Aegean province on the western coast of Turkey, has taken much of the brunt of the illegal crossing route refugees have been taking to cross into Europe, however as is the case in many cities throughout the country, an unprecedented number of refugees are hoping to wait out the war in their neighboring Turkey.

ReVi is geared towards helping those attempting to carve a new life for themselves in İzmir having been forced to abandon their lives and homes to the half-a-decade-long civil war in Syria.

I had the opportunity to speak with Felipe Coimbra, the founder of the Refugee Volunteers in İzmir to hear first-hand how they have organized to help Syrian families settling in Turkey's third largest city. Originally hailing from Brazil, 34-year-old Felipe is a software developer who had been living in Canada for the past seven years and then moved to Güzelyalı four months ago to start this group. "The idea was to try to make their lives better until it's safe to return", said Felipe.

I asked Felipe how and when the group began their efforts and he told me, "ReVi started three months ago. We are a group of independent volunteers who came together to help the refugees staying in Turkey. We have about 10 core members and a lot of volunteers that join our group for a week to up to a couple of months at a time."

I asked Felipe if there were many foreign volunteers, to which he said, "Yes, there are a lot of foreigners. Most of us live and work temporarily in İzmir and lately we have had volunteers coming from Greece." Their Facebook group has about 1,200 members, most of which are people interested in their work or considering joining their group in the future, Felipe explains.

Unlike the vast volunteer movement in the neighboring Greek islands taking in refugees who wage their lives on the illegal crossing, this volunteer group is focused on helping Syrian refugees setting up their lives in Turkey. "Our goal is to make the lives of the refugees easier. Sometimes that is to provide food and emergency items. Sometimes it is help with health care and to accompany them to hospitals as translators. Sometimes it is playing with their children, or simply talking to them," Felipe said. "We only work with refugees who are not planning to cross to Greece," Felipe said. He explained that they work with each family individually and for weeks at a time, adding that each case is specific and depends on what they need, what they want, and what the Refugee Volunteers of Izmir are able to do.The Refugee Volunteers of İzmir have a busy schedule of activities all geared towards assisting Syrian families in need. Every Tuesday they hold a planning event in addition to running different activities during the week. "Our meetings are held at one of our volunteers home and it changes based on their availability. Then we coordinate all of our other activities through Facebook," Felipe said.I asked how many people were actively involved in the group, to which Felipe said, "During our weekly meetings, we have around 20-30 of us. And during our activities 10-20 participate per day."

On Wednesdays, volunteers meet with new families who they are introduced to through the families they have already helped. When I asked Felipe how they were able to track down these families in need, he said, "If you ask them if they know someone else who needs help, they usually say that 95 percent of the people they know need help."

On Saturdays, volunteers drop off supplies, which they take to the homes of Syrian refugees. "We try to spend some time getting to know them a bit better. They usually invite us in for tea and we talk more about what they do, what they need, how their lives were in Syria, etc. They also like to know about us, so they are always asking us questions too," he said.

Perhaps one of the most interesting and certainly most rewarding activities in ReVi's endeavors is their weekly dinners held in the homes of Syrian refugee families. "Every Sunday we go to two or three families for dinner. We pay them TL 200 [$70] in advance," usually on Thursdays, Felipe shares. "We ask them to cook something simple for six people, however we come arrive as a group of ten because they always cook too much," he jokingly adds. "We also make it clear that they are not cooking for us and that we would like to eat with them, so the family eats together with us. Then, before and after dinner, we draw and play with the children."

Felipe said, "It feels like we are visiting family or friends. We laugh, and talk about different topics. It is a great atmosphere for all of us and I am sure it is for them too. We usually stay there for three hours and the food is always delicious!"

The Refugee Volunteers of İzmir have also recently rented a space they plan to use as a learning facility for children and adults and for workshops. Otherwise, they have also held activities in the past at Kapılar and with other organizations they occasionally collaborate with. They have also started up a garden where refugee children learn to grow their own food and will soon be offering Turkish lessons for adults.

I asked if there were any personal stories, he wanted to share and he said, "There are a lot of personal stories, but at the same time, they are all very similar. They have all gone through very bad moments and they continue to struggle. They used to have normal lives and now are forced to live in hard conditions with little hope. To me, it's always hard to see them losing hope." Many struggle to even pay their electricity bill, but they are in Turkey because they have no other option, explains Felipe, adding that they are rightfully afraid of taking the illegal journey and choose to wait here for the war in their country to be over.

You can visit their Facebook page to learn more about the Refugee Volunteers of İzmir and be afloat of how to help or visit joinrevi.org for info on how to join.