Star among the stars 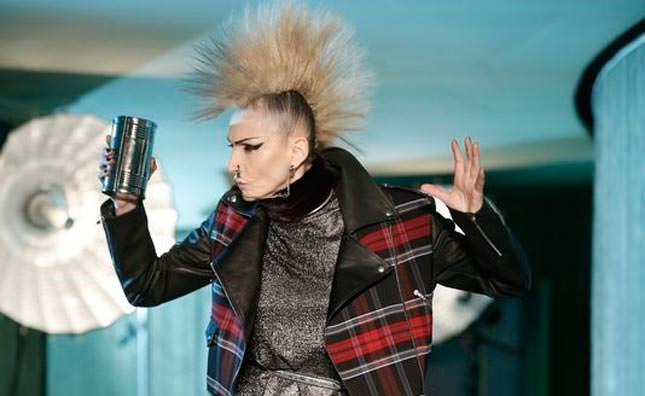 Jean Paul Gaultier skyrocketed to new heights with his latest collection titled "Brits in Space." The French designer's creativity has once again proven to be impressive and vivacious.

Paris (Reuters) - After taking inspiration from butterflies in his January haute couture show, Jean Paul Gaultier on Saturday flew past them into the stratosphere.

Titled "Brits in Space," his show featured a runway that resembled an airplane aisle as models "checked-in." Gaultier used tubing, zippers, shiny fabric and many British Union Jack flags in a collection that was high on the French designer's signature theatrics but low on cohesion. With modernistic tubing formed into hoodies, shimmering silver jump suits, cosmonaut-type collars and vertical hair knots that evoked some kind of alien sex toy, the show was "an invitation to travel in space and look into the future," the French designer said after the show. The astronauts must have taken the wrong turn in space, as the show seemed to end up in London's Carnaby Street, with striped low-slung black and white pants, tartan prints, mohawk hairstyles and all manner of random Union Jacks. Gaultier is owned by the private Spanish group Puig.

Fashion amid the stars found another taker in Maxime Simoens, part of the LVMH fashion stable since last year, with black and white dresses embroidered with shiny pearls and crystals that would have felt at home in the Milky Way. The 29-year-old designer used reflective silver or black metallic squares at his show on Sunday to line shoes, boots, belts and collars. Backstage, even the models' instructions aimed high: "Walk slowly, quiet face, weightless, touch the sky, stars among the stars." Globally, designer ready-to-wear is an 85-billion- euro business, according to Euromonitor.
RELATED TOPICS