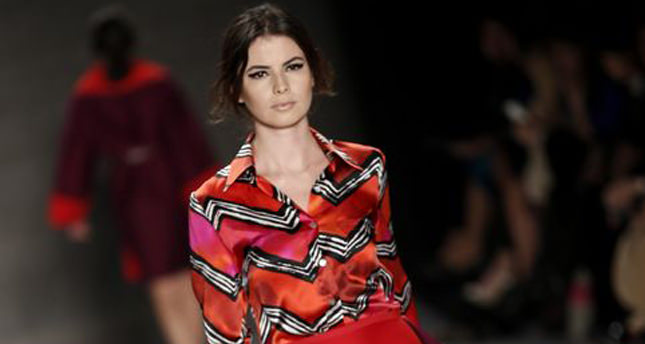 Mercedes-Benz Fashion Week, also known as Istanbul Fashion Week, comes to an end this weekend. All shows postponed from Tuesday will take place on Saturday. Here are the highlights from this year's most fashionable event

ISTANBUL – More than 500 big names in the Turkish fashion industry, including various Turkish celebrities and Rolling Stones front man Mick Jagger's model-turned-designer daughter Georgia May Jagger, descended on Istanbul for five days for the Mercedes-Benz Fashion Week. Turkey's biggest fashion event launched on Monday, March 10 and was scheduled to continue until Friday, however Tuesday's events were postponed to Saturday, March 15. The 22 catwalk shows and a total of 45 events were held at Bomonti's historic brewery.

On Tuesday, March 11, Georgia May Jagger, the youngest daughter of Rolling Stones lead singer Mick Jagger and model Jerry Hall, was caught not strutting down the catwalk but posing in the VIP section. The 22-yearold rock 'n' roll royalty was looking glamorous when she arrived in her sleek black gown to watch Gül Ağış's "Mercedes-Benz presents Lug Von Siga" fashion show from the front row. Jagger is also the new face of GLA Mercedes-Benz. Photographer Serge Leblon and creative director David Carette are the two other important names in the advertising campaign.

Out of 70 applications, only 45 were selected. The criteria for collections to participate in the event were brand positioning, continuity of the designers' collections, whether they have a team capable of managing a catwalk show, et cetera. As with every year, Mercedes-
Benz selects a collection to support under the title "Mercedes-Benz Presents." After Özlem Kayan and Zeynep Tosun, the lucky name this year was Gül Ağış with her brand Lug Von Siga.

Gül Ağış is the creative director and founder of the brand. After completing her studies at Marangoni/Italy Fashion Design, she attended a master's course at Politecnico Di Design in Milan. She launched her first ready-to-wear collection in London at Olimpia Fair where she worked for several Italian brands including Armani.

After returning to her hometown, Istanbul, she worked as a creative consultant to various ready-to-wear brands and shortly afterward created her own in 2010. She showcased as Lug Von Siga at Istanbul Fashion Week for five seasons and then showcased at London Fashion Week. Her exquisite taste in embroidery and prints adds a unique perspective to her collections. Experimenting with different textures and shapes, she effortlessly mixes masculine and feminine touches in her collections.

Another highlight of Mercedes-Benz Fashion Week was Atıl Kutoğlu's 2014-2015 Fall-Winter Collection. The collection made its debut at Istanbul Mercedes-Benz Fashion Week with Australian top model Larissa Marolt as the leading model. Famous Turkish top model and former Miss Turkey Defne Samyeli and Deren Dalu were among others who took part in the show.

One of the most anticipated collections belonged to DB Berdan, which was showcased on March 10. The mother and daughter duo from Istanbul presented an attractive collection with one particularly exquisite piece: a dress made from hair strands - having a total length of about 1,500 kilometers if put endto- end. The piece was prepared using hair from 60 people and 64,000 millimeters of hair conditioner. The whole process took about a week. The collection made its debut in Turkey and was based on the culture of the Black Sea region. Furthermore, the background music of the show included songs from the Black Sea region of Turkey. Arzu Kaprol also attended the fashion week with a private viewing of her collection.

Named after its creator, the designer brand founded in Istanbul opened its first store back in 2007 and thanks to a retail agreement signed with Beymen Group between 2008 and 2012, it has become a highly prominent fashion brand.

Renowned for its sharply-tailored designs detailed to perfection, the brand has a unique approach to design. With a passion for leather and a mix of unexpected materials with a futuristic slant, Arzu Kaprol's designs garnered international acclaim at Paris Fashion Week in 2010. Soon thereafter the brand was discovered by fashion experts like Bergdorf Goodman, Harrods and Montaigne Market. With nine mono brand stores in Turkey and a showroom in Paris, the brand continues to expand globally.

Showing her collections in solo fashion shows at Istanbul Fashion Week since 2009, Gamze Saraçoğlu was another name that left its mark on the event. Working for big brands such as Zara, Marks&Spencer, Kookai, Nafnaf, Etam, Promod, Chevignon, Herry and Damat, Saraçoğlu created her brand back in 2005 and her items are sold in Istanbul, Paris, London and Copenhagen. In an interview she gave to Turkish Elle magazine, she underlined the big steps the Istanbul Fashion Week has taken and the progress it has shown and said, "Istanbul now has a fashion week supported by both the designers and the industry's professionals, and when compared to last year, the event is very exciting and full."

Although the week is over and the scheduled events came to an end on Friday, due to Tuesday's postponement, the fashion fever will continue this Saturday in Istanbul with many important names such as Özlem Kaya and Hakan Akkaya showcasing their collections.