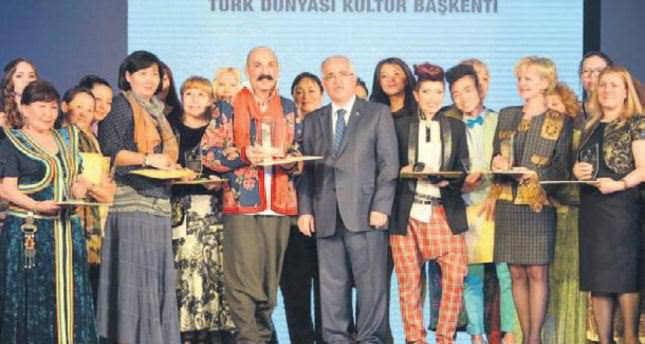 by AA May 08, 2014 12:00 am
ESKISEHIR — The Turkic World Culture Capital Agency and the International Turkic Culture Organization (TÜRKSOY) organized a series of events attended by important names and designers from Turkey and other Turkic countries dubbed "Women and Fashion in the Turkic World." The events took place between May 5 and 7 and the fashion sector's leading names, designers and academics from various countries and regions including Kazakhstan, Uzbekistan, Azerbaijan, Mongolia, Crimea, Macedonia and Turkey attended the colorful and multi-cultural visual feast. The events highlighted the common values of Turkic countries, suggested solutions to present problems and set future objectives to improve cultural ties. "We would like to draw attention to the concept of women in the Turkic world," said Eskişehir Mayor Güngör Azim Tuna. "Women have always accompanied men in the Turkic culture. Turkish women gave every effort during the Independence War. As Prophet Muhammad said, 'Paradise lies at the feet of mothers.' " He further stated Mevlana did not describe women as "lovers" but instead as "the light of God." Turkish women were also granted the right to vote and be elected before many European countries under the leadership of Atatürk. Tuna expressed his wishes to enhance the cooperation within the Turkic world. "We will strengthen our ties thanks to our common cultural heritage and values," Tuna added.

TÜRKSOY Deputy General Secretary Fırat Purtaş highlighted the need to turn rich cultural cooperation into a productive business partnership. The winners of the International Colors of Turkic Fashion Design Competition were presented their awards. Tuna and other delegates paid a visit to the exhibition presenting the competition designs. As a part of the Women and Fashion in the Turkic World, special designs of renowned designer Cemil İpekçi were featured at the catwalk titled "Woman and Fashion." The enchanting designs of Fatma Koç and Emine Koca were on display. Turkish models Şenay Akay, Açelya Samyeli Danoğlu, Rüveyda Öksüz, Çağıl Özge Özkul and Berrin Keklikler introduced the colorful dresses to the audience. The eye-catching designs from Kazakhstan, Uzbekistan, Azerbaijan, Crimea, Uyghur and Tatarstan juiced up the catwalk. Speaking during the closing ceremony, Mayor Tuna extended his satisfaction to host such a unique event. "It was an honor to welcome other Turkic countries in Eskişehir," said Tuna. The Eskişehir Metropolitan Municipality will continue to support fashion and cultural events in the future.