The 'short ' history of the skirt: The rapid evolution of fashion 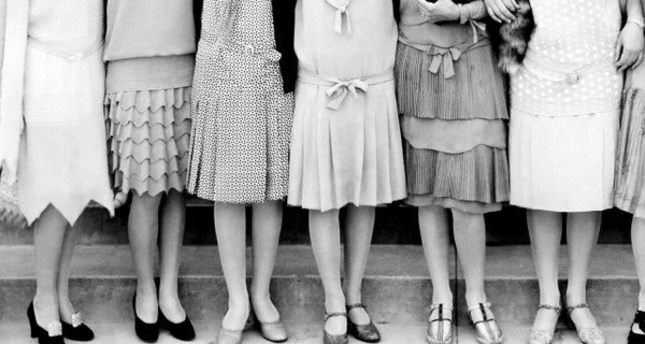 by Reyyan Erdoğan Aug 22, 2014 12:00 am
Looking at the historical journey of clothes, until the 21st century, they were created according to religion, nationality, culture, economic class and occupational groups. The everyday attire of soldiers, workers, public officers, farmers and the clergy were more or less apparent. Although it cannot be compared with the speed of today's trends, we can identify slow but changing fashion trends determined by the upper class just like today.

As fabric was a rare and expensive material in ancient times, common people managed with just an adequate amount. Rich people wrapped meters of fabric around their body, hanging it over their shoulders and walked around the agora sweeping the floor with their clothes to show they had enough money to buy fabric. In other words, sweeping the floors with clothes was a sign of wealth, but also arrogance. Since slaves were entitled to the least fabric, their clothes were usually short. We now see that the concept of "semi-nudity" is no longer a sign of poverty, just as the fabric is not a luxury material after the invention of polyesters.

Fashion, as a result of globalization, informs its followers about the newest changes without losing time. Although fashion movements change throughout time, the determinative status of the countries that dominate the world through their culture does not change at all. Therefore, wearing ethnic clothes the way it used to be becomes the old style in a heartbeat or becomes authentic at best. In times when religion had a central effect over people's lives, more conservative, modest and simple clothes were preferred.

The simple way of dressing including avoiding boasting about inherent qualities, showing off things that do not exist and drawing attention is actually diametrically opposed with what fashion targets today. If we look at the history of western clothing, which determines the current fashion trends, we see that France stands out with apparel. We are in debt to the French, known to be fond of aesthetics, and for introducing the corset, sewing machines, raincoats, swimsuits and many other clothing and clothing machines.

The educated bourgeois were very influential to the social life of 18th century France. These people showcased the court's fashion trends in cafés, theaters and events to people from different social classes. The most successful representative of the "rococo" movement that was adopted during 18th century was undoubtedly King Louis XV's favorite Madame de Pompadour. It is believed that Madame de Pompadour popularized the "rococo" style thanks to her influence on the king as well as on the court's decoration, architecture and clothing. Pastel colors, soft and light fabrics and big flower patterns are hallmarks of rococo fashion. A woman's body was formed according to the beauty norms of the period, and corsets ensured that the waists were slimmer, hips were at the back, and with the help of tarlatans worn under the clothes, skirts became huge.

Another famous French woman who is believed to start the "couture" trend is Marie Antoinette, known for her passion of luxury. Rose Bertin was the exclusive tailor of Marie Antoinette who was the designer of the queen's hundreds of clothes, and prepared the special cushioning for the queen's hair to look high. Although Bertin was ironically criticized by being called the "Minister of Fashion," this did not prevent her from presenting a new dress to the Queen every other week.

English fashion designer Charles Frederick Worth was also among the people who made Haute Couture (custom design) famous. He designed clothes for his wife who was working as a hat model in a boutique in Paris. The elite customers admired the clothes; thus, Worth began to make custom designs. Among his designs, mostly those that had tight and long-tailed skirts became high fashion. During the peaceful times, called "le belle époque" before World War I, some people designed their own clothes while others shopped from boutiques, and owners of tailoring workshops often determined the Parisian fashion.

After the war, women who went out to work discovered pants, and stopped wearing corsets. A new trend that allowed for activities and aimed at comfort prospered. Even the evening gowns got shorter, showing-off legs. Through the invention of synthetic fabrics, the use of nylon, acrylic and polyesters increased, as did people's ability to buy clothing.

A fashion revolution broke out in the 1960's. The new generations created an unbelievable and unlimited style rather than wearing similar clothes to the previous generation. Skirts, short dresses and shorts were introduced by English fashion designer Mary Quant. Furthermore, shining colors, overalls, fur waistcoats, wedge shoes and leather clothing became an indispensable part of our life. Fashion was turned into an instrument that allowed people to express themselves.

The current era of image forces us to believe in imaginary identities. Commercial advisors of the fashion sector say nobody needs a new skirt anymore. The important thing is that with which image and soul skirts are introduced to market. Although there is a cliché that I wear "what looks fit on me," seasonal products, fashion icons and trends turn this commercial circle on its head.

Those who do not follow them feel either lonely or imperfect. While fashion designers who exceed the borders are applauded as genius and brave, I would like to remind you of a well-known phrase, "What is trendy now will be obsolete in 10 years, interesting in 20 years and fashionable in 30 years." Thus, in today's world, it is important to incorporate new trends without losing your own style.
Last Update: Aug 22, 2014 1:38 am
RELATED TOPICS