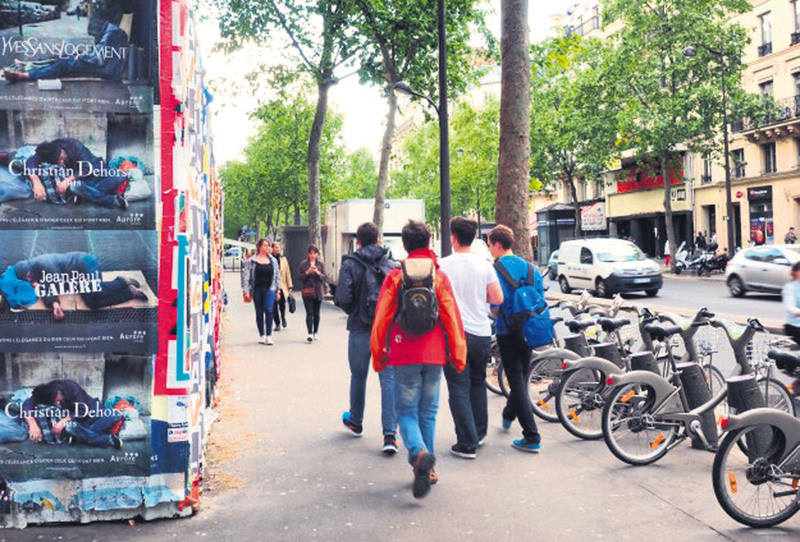 by Anadolu Agency May 08, 2015 12:00 am
Paris, a city renowned for its glitzy fashion scene, has seen some of France's best-known designer' names subverted in a hard-hitting campaign to support the capital's estimated 5,000 homeless people.

Parisians and visitors alike cannot help but notice the large posters spread across the city which bear an unnerving similarity to famous French fashion houses – but accompanied by harrowing scenes of poverty and homelessness.

As passers-by stop to understand what it is all about, it strikes them that the posters feature pictures of homeless men instead of the usual glamorous models.

The three specially-designed posters feature some sadly everyday Parisian scenes: a man asleep on a piece of cardboard on the street; another lying on a subway entrance; a third is asleep on a pile of plastic bags.

"Let's try to have the elegance to help those who have nothing," reads the slogan on the 1,000 posters spread all around Paris.

This eye-catching publicity drive is the way the Aurore Association, a French social welfare organization, has chosen to launch a campaign to shed light on the country's rising homeless phenomenon.

"This advertising campaign aims to raise public awareness of the cause of the homeless, therefore we use the effect of Dior, Gaultier and Saint Laurent to attract people's attention," says Eric Pliez, Aurore director, speaking to the Anadolu Agency.

"We mixed fashion with a social cause to highlight the harsh conditions and exclusion homeless people are experiencing, but through a dignified and decent way, not a pessimistic one," Pliez added.

"We used world-known brand designers' names to make the invisible visible; in this case, the homeless people that we pass by every day without really seeing them," explains Perrine Dequecker, Aurore's communications director.

In France, there are an estimated 3.5 million people living in substandard housing, among them 142,000 homeless known classified as "SDF" [sans domicile fixe], according to data from housing advocacy group, the Abbe Pierre Foundation.

These figures are up 50 percent from 10 years ago, according to the foundation's latest report in February this year.

Families, immigrants, young people and those with mental illnesses are often vulnerable to homelessness by living in unsafe accommodation such as tents, caravans, shacks, on the street or even in woods, often without access to electricity or water.
Last Update: May 08, 2015 10:41 pm
RELATED TOPICS