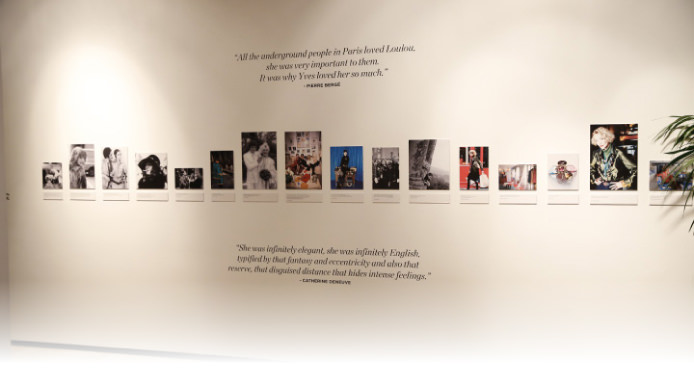 The jewelry exhibition of Loulou de la Falaise, a late Parisian designer behind ‘70s-style boho chic fashion, will be on display until May 16 at ISTANBUL'74 – the arts and culture platform located in Istanbul's Beyoğlu district

To no one's surprise, 1970s-style clothing is back in a big way this summer. With maxi-dresses, peasant blouses and big hats, the all-encompassing revival of bohemian style dominates New York and Paris fashion runways. It is time to search your mom's closet to see if clothing items from the '70s still survive and get inspired.

Also in Istanbul, the season's hottest look is being celebrated with the accessories of a late Parisian designer Loulou de la Falaise, who was a free-spirited woman behind the '70s-style boho chic. The jewelry exhibition of Loulou opened last week at ISTANBUL'74 with an evening reception overseen by Ariel de Ravenel, a fashion consultant and former editor of Vogue (Paris and U.S. editions), and Natasha Fraser-Cavassoni, the former executive editor of Harper's Bazaar. The exhibition transports visitors to the time of Andy Warhol and fashion genius Yves Saint Laurent.

Elegantly arranged on small glass tables, Loulou's accessories shine in different colors – jade, crimson, turquoise and white and dark blue. Designed in either round, square or rectangular shapes, the displayed jewels are a manifesto of an Anglo-French socialite who appealed to women of different ages and tastes.

Alongside glittering necklaces, upper arm bracelets and earrings, the exhibition offers an exciting glimpse into the life of a stylish persona who was working as junior fashion editor at the British magazine Queen and later became a landmark in Parisian haute couture when she began designing for Saint Laurent. "Loulou was [an] absolutely non-stop [woman]. She worked for fashion and she lived for fashion," said Ravenel during the opening talk. Therefore, it is not surprising to learn that Loulou used to create almost 2,000 pieces jewelry each year. Praising her diligence and attention to detail, Ravenel stressed that Loulou was also pushing Laurent to do more work.

Taken from Ravenel and Fraser's namesake book released last year, the photos of the passionate designer are what bring the exhibition to life. Alongside more than 400 images, the book includes an essay by French industrialist and partner of Saint Laurent, Pierre Berge, and interviews with Loulou's friends such as late fashion designer Oscar de la Renta, Elsa Peretti, Paloma Picasso and Christian Louboutin. Visitors will feel as if they are in a time capsule when viewing black and white or color photos. '70s glamour prevails at the exhibition with Loulou's turbans, statement dresses, authentic jewels and masculine power clothes embodying bold colors and patterns with a bohemian flair.

Pointing to Loulou's unpretending nature, Fraser-Cavassoni criticized "the obsession with looking absolutely perfect" in today's fashion world. She asserted that some celebrities have the same expression on their face every time they pose for cameras. Furthermore, Ravenel and Fraser-Cavassoni both agreed that the term "icon" is overused in today's world, highlighting it does not apply to all designers and stylish persons.

Speaking exclusively to Daily Sabah, the founder of the international culture and arts platform ISTANBUL'74 and curator of the exhibition, Demet Müftüoğlu Eşeli, said: "Although Loulou was known as a muse, she marked her name through important works with her creativity and productivity. She had great energy, combining it with working discipline." Eşeli shares an old friendship with Ravenel as well. "I shared her excitement during the preparations for the book. I was thinking of introducing the book in Turkey with a book-signing event. I wanted to display the project with the photos of contemporary photographers Helmut Newton, Richard Avedon, Steven Meisel, Michael Roberts, Arthur Elgort and Peter Lindbergh, all of whom witnessed Loulou's life and made the book more meaningful," while expressing her enthusiasm. "We have gathered the jewelry and the photos of the book "Loulou de la Falaise," which has created a great impact since its release on a meaningful project," Eşeli added. Answering the question as to why Loulou continues to draw the interest of young designers even after her death, Eşeli said that her fashion perception is beyond time. "With her unique attitude and creativity, she had a stance that allowed her to be appreciated by all time periods. I believe Loulou is more than a muse of Yves Saint Laurent," she stressed. Eşeli describes her as a woman who always worked hard throughout her life, created her own brand and had big passions. "I think young people understand her distinct character," she added. Not only Ravenel and Fraser-Cavassoni, but also all the legendary aforementioned photographers entered into the enjoyable collaboration based on trust and sincerity to hold this exhibition and book-signing event at ISTANBUL'74 Galatasaray, as Loulou's works continue to be an inspiration for the present and future. The jewelry exhibition will be on display until May 16.
Last Update: May 08, 2015 10:40 pm
RELATED TOPICS