London Fashion Week continues with a change of scenery 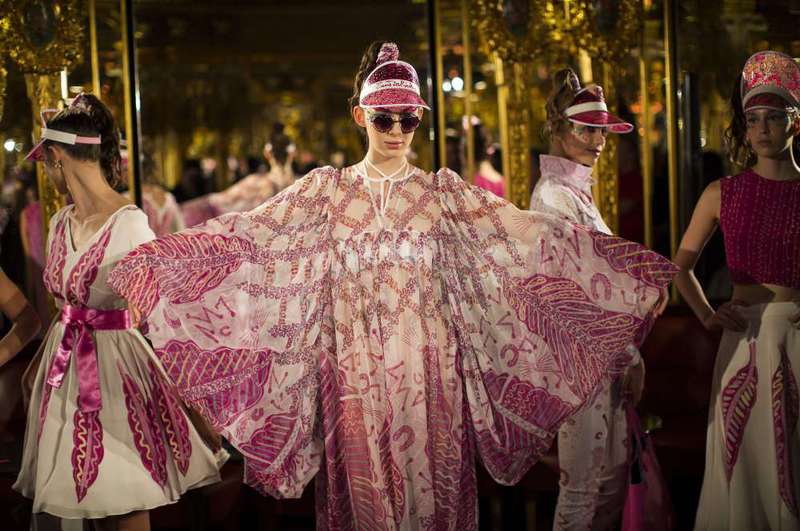 by Sep 21, 2015 12:00 am
Hot on the heels of New York, London Fashion Week opened Friday with veteran designer Zandra Rhodes setting the standard for the cohort of young designers hoping to make their mark.

The 75-year-old presented her spring/summer 2016 collection inside the gilded room at the Cafe Royal Hotel, showcasing hand-painted designs in vivid pinks, blues and orange.

The collection included plant motifs slapped on trousers and dresses, and translucent pink visors. The designer took inspiration from the "batik" fabrics of the Far East.

Bold and prone to experimentation, British fashion designer Jonathan Anderson proved his worth on Saturday with an eye-popping catwalk show at London Fashion Week featuring time-traveling creations. The models had almost androgynous looks, and the designs were sparse in color. The dresses contained patterns using the infinity-inspired designs of U.S. sculptor Richard Zawitz. Some also appeared to go back in time, with 19th century-style puffy sleeves on the upper arms.

Anderson, who was showing off the spring/summer 2016 collection for his own label J. W. Anderson, is also the creative director at the Spanish accessories maker Loewe, owned by French luxury giant Loewe. At just 31 years old, he is considered hugely influential.

Leaving behind the institutional luxury of its former Somerset House setting, this year's Fashion Week – London's 62nd – will be based in the urban jungle of London's famous Soho entertainment district at Brewer Street Car Park, in the capital's historic red light district.

Seoul-born Jackie JS Lee was the first to unveil her collection at the new venue, showcasing her asymmetric designs accentuated by stripes running in all directions. Her unconventional designs played with geometry, revealing one shoulder or leg at a time, and also used color sparingly.

Over five days, in the midst of bustling restaurants, sushi bars and sex shops, the Art Deco multi-story car park built in the 1920s will welcome more than 150 designers, with dozens of other shows and presentations taking place across the city.

"We just felt it was time for change, something new and exciting," Caroline Rush, CEO of the British Fashion Council (BFC), told Agence France-Presse (AFP). "[With] London being the capital of designers who are a bit more edgy and cool, it's quite a logical evolution," said Laetitia Wajnapel, a Parisian blogger and photographer based in London who goes by the alias "Mademoiselle Robot." "Among the four big fashion weeks [New York, London, Milan and Paris, London is] "still the rebellious, avant-garde little sister," she added.

London Fashion Week will also give prominence to new technologies, with live-streaming of many of the shows and a new partnership between the fashion label Hunter and video service Periscope. Riding the social media trend, Burberry said it would hold a "first-ever Snapchat Show" for the platform's 100 million users ahead of the official catwalk today. There will also be an exhibition dedicated to Minnie Mouse and her influence on fashion and pop culture, with photos taken by model Georgia May Jagger, the daughter of Mick Jagger and Jerry Hall.
RELATED TOPICS