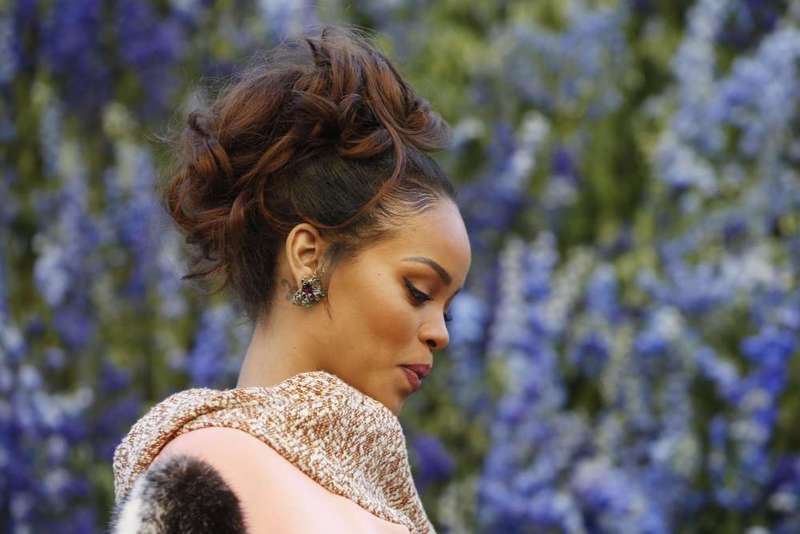 The sky was the limit for powerhouse Christian Dior, who built an entire floral mountain in the Louvre to house the 15 minute show at Paris Fashion Week. Sitting in the front row was Rihanna, who attracted almost as much attention as the decor

Pop star and Dior brand ambassador Rihanna swooped into the Louvre to a flurry of paparazzi flashes, and posed in front of a myriad of blue flowers during Paris Fashion Week. The backdrop complemented the stylish singer's clothes – a pink Dior couture cape dress from the fall-winter collection that features an exaggerated pocket and raunchy boots.

Inside, she appeared relaxed and took selfies, even as the media around her wall of bodyguards ballooned to near chaos.

Designer Raf Simons paid homage to Christian Dior's legendary love of flowers creating a mountain of 400,000 delphiniums in the heart of Paris, the centerpiece of a stunning setting to show the house's collection on Friday.

The giant lavender hill created in the courtyard of the Louvre drew A-list celebrities including brand ambassador Rihanna, resplendent in a diaphanous pink fur trimmed coat and aviator glasses, and Game of Thrones star Emilia Clarke.

"I wanted the collection to have a certain purity," Simons said in a statement.

"I wanted to express an idea of femininity, fragility and sensitivity without sacrificing strength and impact," he said.

"A collection that is simplified to the extreme, focused on a single directing line which at the same time evokes femininity, fragility and sensibility."

Pastel shades abounded and the models – led by house favorite Sodia Mechetnerh – had minimum make-up in line with Simons avowed objective of purity.

There was also a new version of the Bar, Dior's iconic and form hugging jacket with pleats at the back, and masculine tailoring in some trousers and shorts.

Actress Chiara Mastroianni, the daughter of screen legends Marcello Mastroianni and Catherine Deneuve, gushed with praise after the show.

"I found it very beautiful, very romantic. This romanticism and this softness are unexpected today," she said.

Raf Simons took a fresh and naturalistic approach to Dior's spring-summer looks: clothes that were as light as the scents wafting from the flower-filled decor.

As ever, for "cerebral" Simons, the references were encyclopedic.

This season's muse was Victorian-style underwear: high-waisted knickers, in white cotton with a circular trim.

They were worn under loose, sheer organza dresses or underneath Dior's famed "bar jacket" that was taken from the 1949 archive and given a graphic, menswear twist. Simons is, after all, a master of gender-bending. The delicate men's tailoring continued in some three-piece suits with delicate horizontal pinstripes and military jackets.

There were some wonderful contradictions and contrasts that displayed the deceptive simplicity of the Dior designs.

It proves the talent of Simons: rich in his referencing, but light in execution.

It was a raw, tropical summer at Issey Miyake.

The house of the fiber technology treated guests to another journey around fashion science by using ultra-thin paper thread made from plant-fibers to produce tropical-looking T-shirts.

Primitive fringing adorned layered skirts with woven fibrous textures in checks of pinks, blues and black. They evoked a Hawaiian hula or grass skirt, a vibe that was repeated in floppy, fringed or cone hats worn by some of the models.

The pleating was the strongest part of designer Yoshiyuke Miyamae's show, and the techniques behind it equally fascinating. Swirling pleats in vivid blue, purple and green created sometimes sumptuous moving, bouncing trapeze and oval silhouettes.

It was achieved from a new process called "Baked Stretch" which involved glue being printed on the fabric and then baked to expand under the high temperature and mold itself.

The French government is supporting an initiative to promote alternative standards of beauty in an industry that promotes being tall and thin.

Fifteen women dwarves all measuring under 4 feet 4 inches trod the boards proudly in the latest colorful spring-summer fashions, designed by a team of designers for the show.

Ethnic styles from North Africa and Anatolia were in vogue for Isabel Marrant, who fused them with contemporary fabrics and sportswear with funky results.

Harem pants appeared first as serious, and then with a neat contemporary twist in white, as truncated sports pants. And a contemporary dropped-waist jumpsuit in pale yellow had tassels flying, a gold neck band and a loose pendant. It was a fresh take on the ever-lingering ethnic runway trends.