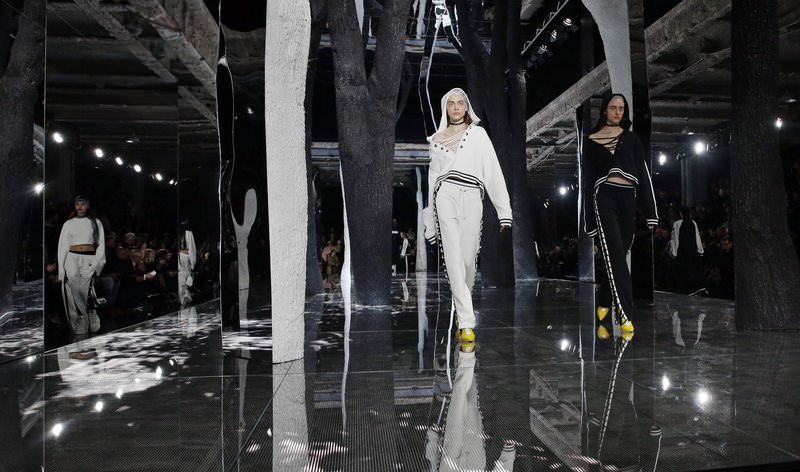 by Feb 15, 2016 12:00 am
Barbadian superstar Rihanna, feted as much for her daring style as her vocal chords, closed out day two of New York Fashion Week by unveiling a debut collection for Puma that put sexy into sweatpants.

Following in the footsteps of music star Kanye West, who on Friday booked out Madison Square Garden to parade his Yeezy Season 3, "RiRi's" first catwalk collaboration with the German brand has been one of the most hotly anticipated celebrity-link up of fashion week.

It was a high-energy catwalk presentation that blended the singer's love of sportswear with sexy: Thigh-high black boots, hoodies, thongs and sports jackets turned into strapless dresses zipped down the front.

The palette was monochrome: black and white and the music backdrop relatively restrained giving pride of place to the clothes - marketed as "Fenty X Puma."

The catwalk was broadcast simultaneously on her Facebook page, where it was viewed more than half a million times in just two hours. It was a more refined affair over at Jason Wu, the wunderkind best known for dressing Michelle Obama, presented a sophisticated collection designed to cultivate loyalty from illustrious clients.

The Canadian-Taiwanese designer titled "immaculate" the collection of his eponymous label at Fashion Week, where he is also making an appearance as artistic director of womenswear at Hugo Boss. There was an impeccably cut navy dress with a round neck, a black dress with plunging decolletage embellished with a blue fur collar and a long-sleeve knit dress with bare shoulders and a plunging neckline.

"The idea is about these immaculately dressed women. I wanted to address the idea of the wardrobe and thinking about what she wants and what she covets, and that's really important for me," Wu told AFP. Wu shot to global prominence at age 26 when he dressed Obama in a stunning white creation for her husband's first inaugural ball in January 2009 - as feat he matched at the couple's second in 2013. The young designer repeated his oft-stated ambition of dressing Australian Oscar-winning actress Cate Blanchett, up for best actress in "Carol" at this month's Academy Awards for a fourth nomination. "I think she is such a chic woman and always kind of a style icon for me," he said. But Wu stopped short of wading into political waters when asked if he had any style tips for Hillary Clinton."I think it would be the other way around, she would give me advice, I think for me I'm just happy such a smart woman is running for president," he said. Tadashi Shoji unveiled a fall/winter collection, inspired by a tattoo parlor, which was much sexier and edgier than his customary feminine lace overlay crafted into lady-like evening and cocktail gowns. He paraded a collection of geometric patterns and flesh-toned mesh jumpsuits and dresses that mimicked body art, giving his models the impression that they were almost naked except for tattoos.