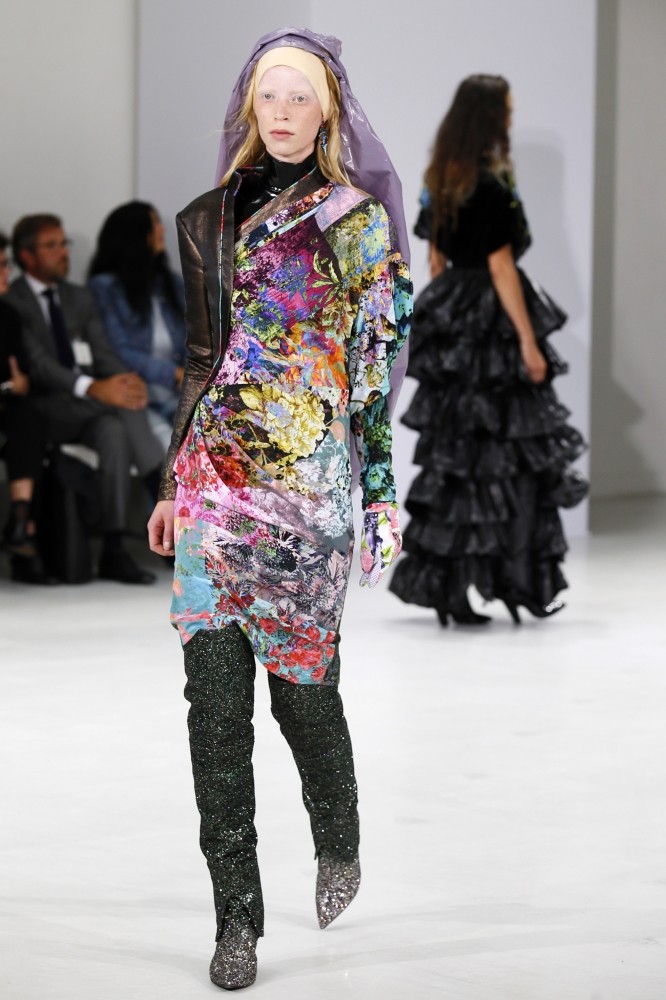 A model displays a creation by Belgian fashion designers An Vandevorst and Filip Arickx.
by Jul 04, 2017 12:00 am

Top fashion designers set out Sunday to prove the saying that a stylish woman can even look good in a bin bag.

Haute couture is the very pinnacle of the fashion world, with only an elite band of designers allowed to show their luxurious handmade creations in the French capital, some of which cost tens of thousands of euros.

The pair - collectively called A.F. Vandevorst - set out to challenge that aesthetic with a punkish cavalier show which also featured rubbish bag veils.

Rather than demure debutantes in puff balls of taffeta and silk, some of their models had the air of runaway nightclubbing nuns.

An Vandevorst told AFP the show was an ode to the joy of dressing up with anything you can find to hand.

"It's about total freedom and creativity, and a woman who lives out of her suitcase [...] transforming old stuff into new," she added.

"She takes things that she finds like a bin bag and embroiders it. She is so creative that the material doesn't matter.

"She is so chic and so sophisticated she can turn anything with her natural flair - poof! - into something great."

A handbag is thus transformed into a hat, and whole line of wardrobe staples - leggings, jackets and tops - into head dresses and wimples.

In a blow to New York fashion week, two high-end U.S. labels also made their bow on the couture catwalk alongside A.F. Vandevorst as guest members.

Rodarte, a red-carpet favorite for Hollywood royalty like Natalie Portman and singer Katy Perry, said the label now intends to hold all its shows in Paris.

Gold and silver bows turned up on the waist of a string of pieces in the unapologetically pretty spring summer collection which was dominated by flower motifs.

Feathered frond jackets and trouser suits that almost seemed to be made of stamens were littered through the lineup.

New York-based Proenza Schouler also chose to show its spring/summer ready to wear 2018 collection rather than the autumn/winter range most other brands were presenting.

Lazaro Hernandez, one half of the design duo, said they had been talking about making the move to Paris for years.

While the Mulleavys insisted it was the French capital's view of fashion as art that had attracted them, Hernandez said Paris "has always been the most inspiring city for us.

"We came over and we searched all these independent Parisian ateliers where they do feather work, hand weaving textiles, ribbons (and so on), and we employed all these amazing little studios and worked back and forth from New York to Paris."

Dutch-Vietnamese designer Xuan-Thu Nguyen showed how exquisite that workmanship can be, with two fake fox stoles, one made with embroidered cotton flowers and the other from similarly rendered leather catching the eye.

She also had more of the wide-brimmed "tombstone hats" that are fast becoming a motif of her Xuan label.