London Fashion Week has seen the return of Giorgio Armani to the London scene, Burberry reviving and emphasizing its traditional plaid and Versace pushing the edge of its rock chick look.

On the fourth day of the fashion extravaganza in the British capital, Erdem emphasized retro-style in its Monday catwalk show. Later in the day, designers Christopher Kane, Julien Macdonald, Osman and others will reveal their thoughts on womenswear clothing for spring-summer 2018.

Canadian and Turkish designer Erdem Moralıoğlu has turned the Old Selfridges Hotel into a glamorous speakeasy for his London Fashion Week show.

Many outfits had floral themes and remarkable detailing, adding to the show's exuberance and opulence. Some even had feathers carefully attached. The palette embraced bold greens, pale pinks and yellow, strongly using colors throughout. There was no hiding behind solid black for Erdem. 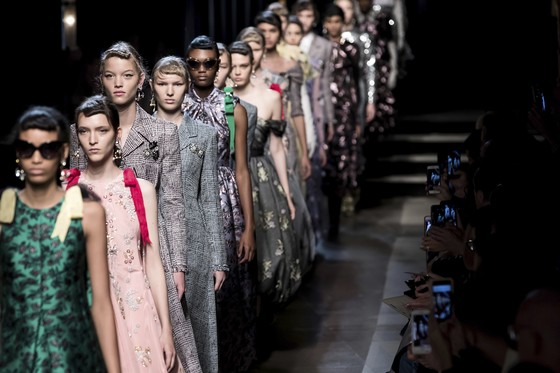 While many designers are showing more and more skin, Erdem opted for a subtle celebration of feminine beauty. There were some sheer and lacy outfits, but most were more modest, with either high necklines or sweetheart ones.

The effect was entrancing. Nostalgia was in the air — the program featured a photograph of Queen Elizabeth II meeting Duke Ellington in 1958 — and the dramatic presentation artfully evoked the Big Band era.