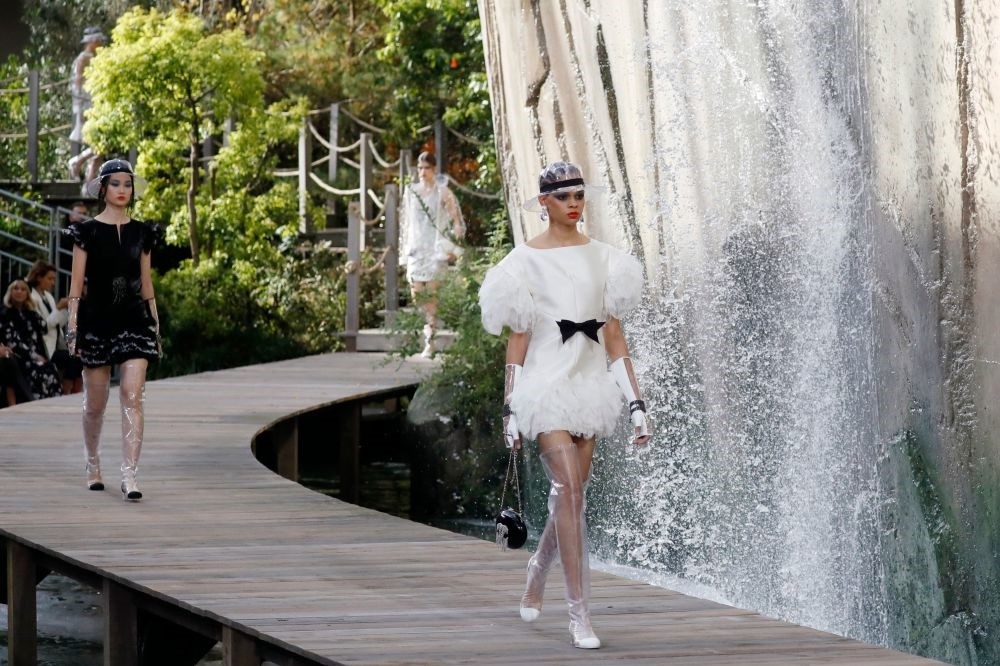 With Paris Fashion Week coming to an end Tuesday, here's a look at the five big takeaways from the catwalks.

The future will be frilly. Sparingly deployed on the diagonal or in a whole flotilla of volant skirts and dresses, frills are back as a major trend for next spring and summer. Once a symbol of frivolous, even enslaved, femininity, they have been reinterpreted by the likes of Stella McCartney and Clare Waight Keller at Givenchy as symbols of power and confidence. While they have been creeping back out of the cupboard for a while, frills ruffled through almost every show this past week, from the punky glamour of Alexander McQueen to the slick styling of Giambattista Valli, from edgy Sacai to avant-garde Comme des Garcons.

Black and white isn't so much a trend for next spring and summer as the rule. Although pastels and strong colors traditionally dominate the spring / summer collections, this year many brands have not looked much beyond the two-tone essentials of black and white. The list of those who have gone binary is long: Sexy Saint Laurent, Givenchy, Off-White, Balmain, Mugler, Lanvin, Isabel Marant, Ann Demeulemeester, Paco Rabanne and Yohji Yamamoto. Silvery greys are also in, with Nina Ricci, Paco Rabanne and Vanessa Seward using them to great effect.

Oversize is over, cut down to size by a sharp return to tailoring.

For the last two years, the catwalks have been awash with sulking teenagers hiding in their hoodies. But with the enormous coats and trailing-trousers look now filtering down to the high street, fashion is off again in another direction. Paris Fashion Week has been remarkable for bringing clothes back to the body, with a much closer cut to shake off the studied shapelessness of the last few seasons.

With Rick Owens, the Los Angeles maverick who took oversize to extremes, cutting his cloth much tighter, only Celine held to thinking big. Even Virgil Abloh, the en vogue American designer at Off-White so beloved by rap stars, has embraced the well-cut power suit, sending out Naomi Campbell in a double-breasted white jacket with cycling shorts.

Cycling shorts are another mini-trend, with Saint Laurent, Chloe and Y/Project joining the peloton of houses highlighting a look apparently pioneered by Kim Kardashian. With Lacoste quitting New York for the Paris catwalk, there is no holding sportswear's onward march. Louis Vuitton sent out almost all of its 46 looks in trainers, and matched silk sports shorts with highly embroidered 18th-century-style tailcoats. But when the smart French label Koche sent out a series of re-imagined Paris Saint-Germain tops, it seemed like fashion had finally surrendered to the football shirt-wearing masses. Despite the pearls and the exquisite detailing, there was still something of a sharp intake of breath - was a style Rubicon being crossed here? Christelle Kocher, the Koche designer who also heads up Lemarie, which specializes in feathers and other haute couture fripperies, managed to stay just about onside by successfully feminizing a garment with such a pungent whiff of maleness.

Yet it was another item from the male locker that really got designers' juices going, as Lacoste turned its emblematic polo shirts into trailing and asymmetric dresses, with the neck pulled over to play up a bare shoulder. Reworked polos popped up too at highly influential Celine, Atlein, Carven and Y/Project where Glenn Martens also pulled Bermuda shorts way upmarket.

Summer wouldn't be summer without print dresses and skirts. This year, however, they are particularly easy on the eye.

One expects nothing less than the sublime from the prince of prints Dries Van Noten, and the Flemish master did not disappoint. But Akris, the biggest Swiss brand you've never heard of, won still more hearts with theirs. But it was Liselore Frowijn's futuristic visions of African wax prints, Junya Watanabe's punky take on Marimekko textiles and Comme des Garcons' Arcimboldo dress which printed themselves on the memory.

And finally, among the ingenious oddities of the week were Balenciaga and Chanel's handbag overcoats, little poncho parachutes to protect purses that can cost the price of a secondhand car. Both brands also attempted the seemingly impossible, trying to make Crocs sandals (Balenciaga) and plastic see-through macs (Chanel) objects of desire. History will decide.