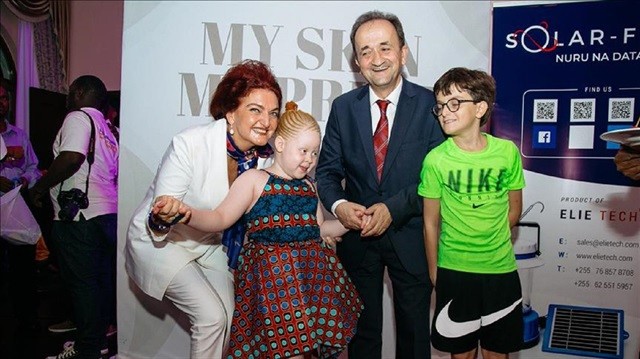 Dressed in dazzling outfits, female albino models made their debut before a cheering crowd at the show, which was held under the title My Skin My Pride in late January.

The event, organized by the Brigitte Alfred Foundation and hosted by the ambassador's wife Yeşim Davutoğlu, was designed to dispel existing myths about albinism and widespread persecution against people with the disorder.

Similar events were also held in Kenya and the Democratic Republic of Congo.

More than 75 albino Africans, who lack pigments in their skin, hair and eyes, have been murdered in the east African country in the past decade for black magic purposes, according to U.N. figures; many were hacked to death, with their body parts mutilated.

In September 2017, a Tanzania court sentenced six men to 20 years in prison, each for chopping off the hand of an albino boy that they hoped to sell as a witchcraft charm. Across Africa, people with albinism are shunned, suffer severe discrimination and are regularly killed during witchcraft rituals.

"We wanted to show the world that a person with albinism is just as capable as any other person," she said.

We also wanted to empower people with albinism to be confident in their own skin, she said.

"I believe we really achieved this from the reaction we have been receiving and we are one step closer to ending stigma against PWA [Persons With Albinism]."

Lymo said albinism is not a curse, and it is not caused by a woman having an affair with a Caucasian man, as some people believe.

"There are so many ridiculous myths that have caused innocent lives to be lost," she added.

My Skin My Pride is a showcase of albinism beauty as well as an educational platform for albinism awareness, she said.

"We really want to make My Skin My Pride a global movement for men and women, girls and boys who are perceived to be different in any and every way," she added.

According to her, events such as fashion shows could help change mistaken beliefs about albinos.

"Respect for people living with this skin condition should be reinstated," she said.