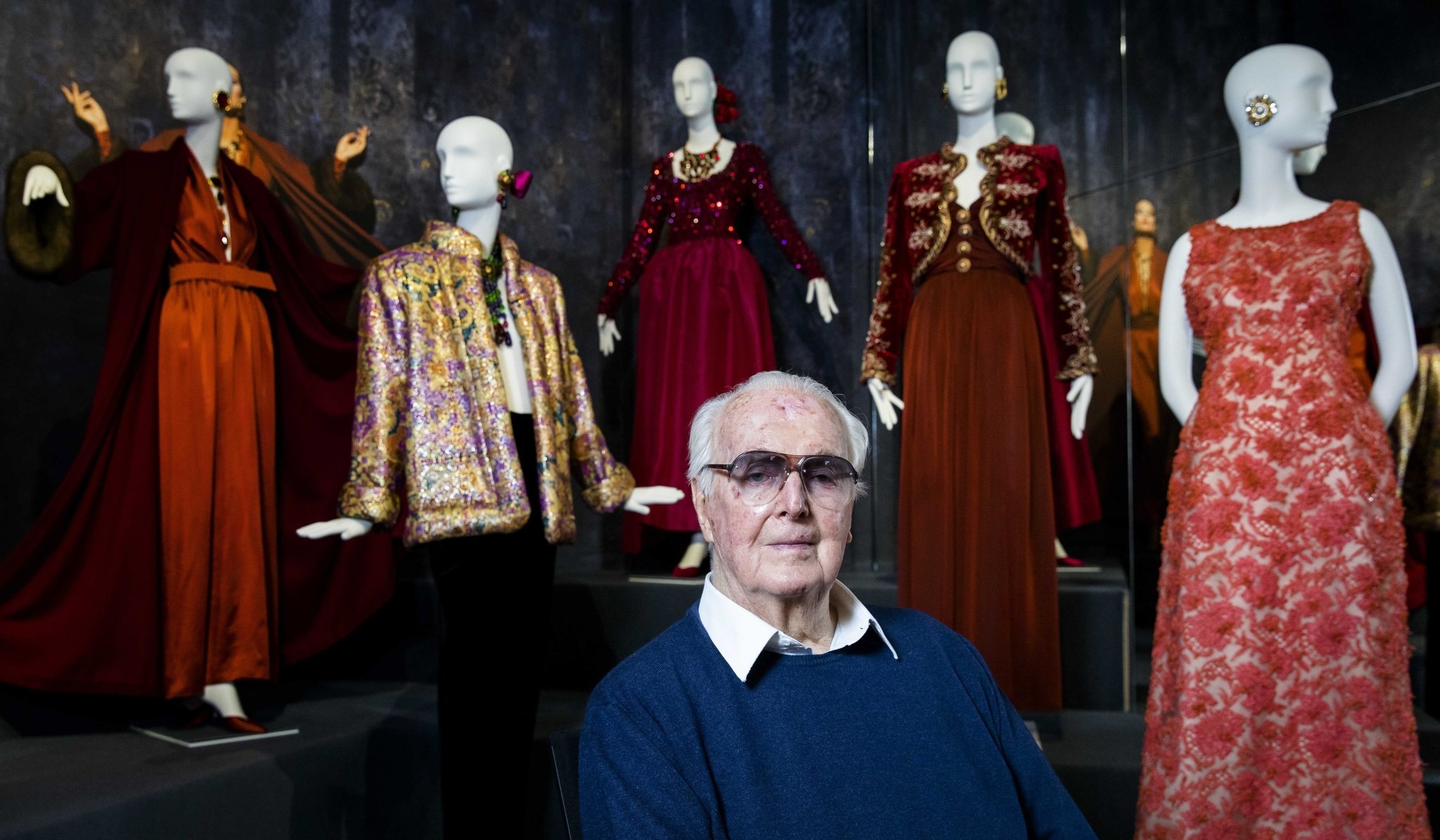 French fashion designer Hubert de Givenchy poses for photos prior to the opening of 'To Audrey With Love', an exhibition of his work at the Gemeentemuseum in The Hague, the Netherlands, 23 November 2016. (EPA Photo)
by reuters
Mar 12, 2018 12:00 am

French fashion designer Hubert de Givenchy, an aristocrat who founded the house of Givenchy in the 1950s, becoming famous for dressing the likes of Jacqueline Kennedy Onassis and Grace Kelly, has died at the age of 91, the Givenchy label said on Monday.

A commanding presence in fashion from the moment he presented his first collection in Paris at the age of 24, Givenchy became synonymous with elegance and an insouciant glamour. He designed the black dress Audrey Hepburn wore in "Breakfast at Tiffany's".

His family -- his father was the marquis of Givenchy -- had hoped their son would become a lawyer but the young man, who stood 1.96 metres (6 feet 5 inches) tall, was drawn to fashion and design from a young age, moving to Paris to study at 17.

His hallmark creations, including balloon-sleeved blouses and calf-length trousers with flared hems, were hailed in their time as airy alternatives to the tight waists and artificial curves of the then-dominant "New Look" of Christian Dior.

His first collection -- unveiled in 1952 -- won recognition the day it was presented: Givenchy rang up 7 million francs (approximately 1 million euros) of orders, enough to allow him to pay off his backers and assume ownership himself.

His interest in fabric sprang from a childhood familiarity with fine textiles at the home of his maternal grandfather, who was an administrator for the Beauvais and Gobelin tapestry industries and a collector of quality fabrics.

The designer's father died when Hubert, born in Beauvais, north of Paris, was two years old. He and his brother were brought up by their mother and her parents.

"BALENCIAGA SEES NO ONE"

The young Givenchy initially studied law but, in the atmosphere of liberation following World War Two, he entered the Ecole des Beaux-Arts in Paris.

Fascinated by Spanish-born Cristobal Balenciaga, who was at that time the dean of Paris designers, Givenchy presented himself and his sketchbook at Balenciaga's door, only to be turned away with a curt "Mr Balenciaga sees no one".

Givenchy served apprenticeships with other designers -- Jacques Fath, Robert Piguet and the exuberant, iconoclastic Elsa Schiaparelli -- before venturing out on his own.

Of that first collection, a British fashion writer wrote: "These dresses remind you of that first, best, glass of champagne."

After his phenomenal debut, Givenchy went to New York to capitalise on his popularity with Americans. It was there that he finally met the reclusive Balenciaga, and the two maintained a close friendship until the Spaniard's death in 1972.

Givenchy often told interviewers: "Balenciaga taught me everything I know. He taught me to care for the details, that it was not necessary to sew on a button where it had no use, or to add a flower to make a dress beautiful ... no unnecessary detail."

Among his American customers were Jacqueline Kennedy, who wore one of his designs to President John F. Kennedy's funeral in 1963, and movie goddess Grace Kelly, who became Princess of Monaco.

Perhaps his most loyal muse was Audrey Hepburn, who sported his dresses for three decades after they struck up a working relationship in 1963. It has been rumoured that Givenchy first thought he was dealing with Katherine Hepburn when he was contacted about dressing Audrey for her movies.

As well as "Breakfast at Tiffany's", Givenchy clothed Hepburn in "Sabrina", "Funny Girl", "Charade", "How to Steal a Million" and "Bloodline".

He dedicated "L'Interdit", his second of four perfumes, to Hepburn, and in 1988, when the state of California presented him with a Lifetime Achievement Award, she presided at the ceremony.

Givenchy branched out into menswear soon after opening his fashion house, and in 1970 he began designing furnishing fabrics. He also designed interiors for several hotels as well as a limited edition of Ford Continental cars.

Even today, Givenchy remains a star-studded brand. Under designer Riccardo Tisci (who recently joined Burberry) it became a hit with the Kardashians and was credited with attracting the most social media "buzz" during Paris fashion week.

The silver-haired, blue-eyed Givenchy was a prodigious worker in his time, starting weekdays sketching or choosing fabrics at 7 a.m. in his studio on the Avenue George V in Paris.

On holidays and at weekends he often retreated to his stone, moat-enclosed manor house in the countryside on the road to Tours, in western France, surrounded by Chinese, French and English antiques and fabrics of his own design.

After more than 30 years in charge, he sold his label to the French luxury goods group LVMH Moet Hennessy-Louis Vuitton in 1988, staying on under LVMH control before retiring in 1995.

In addition to the Paris fashion house and boutiques in at least eight countries, LVMH also took ownership of 178 Givenchy licences for perfumes, clothing, and interior decoration.

Givenchy now earns LVMH in the region of 110 million euros in annual sales, according to an estimate by investment analysts at the Bernstein financial services firm.