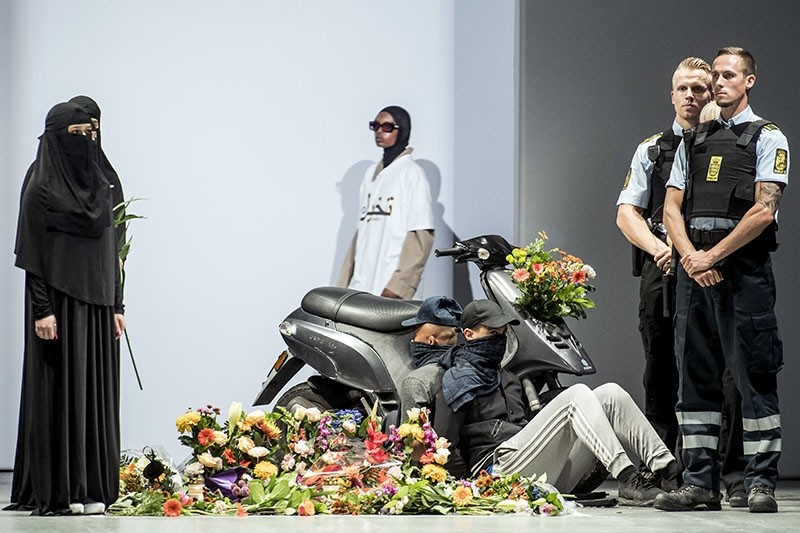 An Iranian-born designer has made more than a fashion statement by showcasing models wearing burqas and dressed as police officers at a show in Denmark days after a law banning the full-face coverings worn by some Muslim women took effect in the country.

Reza Etamadi said of his MUF10 brand's Copenhagen Fashion Week show on Wednesday: "I have a duty to support all women's freedom of speech and freedom of thought."

Denmark's much-debated "Burqa Ban" has prohibited burqas and niqab — Muslim dress which only shows the eyes — in public places since Aug. 1. Both are rare in Denmark.

Etamadi says that by enforcing the ban, authorities are violating women's rights and "the free choice we in the Western world are known for and proud to have."

"In Iran where I was born, women fight to freely choose what to wear," Etamadi said, adding "In Denmark, where I grew up, (...) women were free to choose how dressed or covered they wanted to dress."

"I have no unanimous attitude toward the ban in general but I have a principle: No man should decide what women should wear," Etamadi said the statement.

On Sunday, a woman wearing a face veil became the first person in Denmark to be penalized for violating the new law, and was fined 1,000 Danish kroner ($156). Police asked her either to remove the veil or leave the premises. She opted to leave.

Danes have protested the introduction of the law, with hundreds of Muslim and non-Muslim women donning niqabs and taking to the streets to decry what they call a "discriminatory" measure against a minority group.

Under the law, police are able to instruct women to remove their veils or order them to leave public areas. Justice Minister Soren Pape Poulsen said officers would fine them and tell them to go home.

Other European countries – including Belgium, France, the Netherlands and Spain – have similar bans.