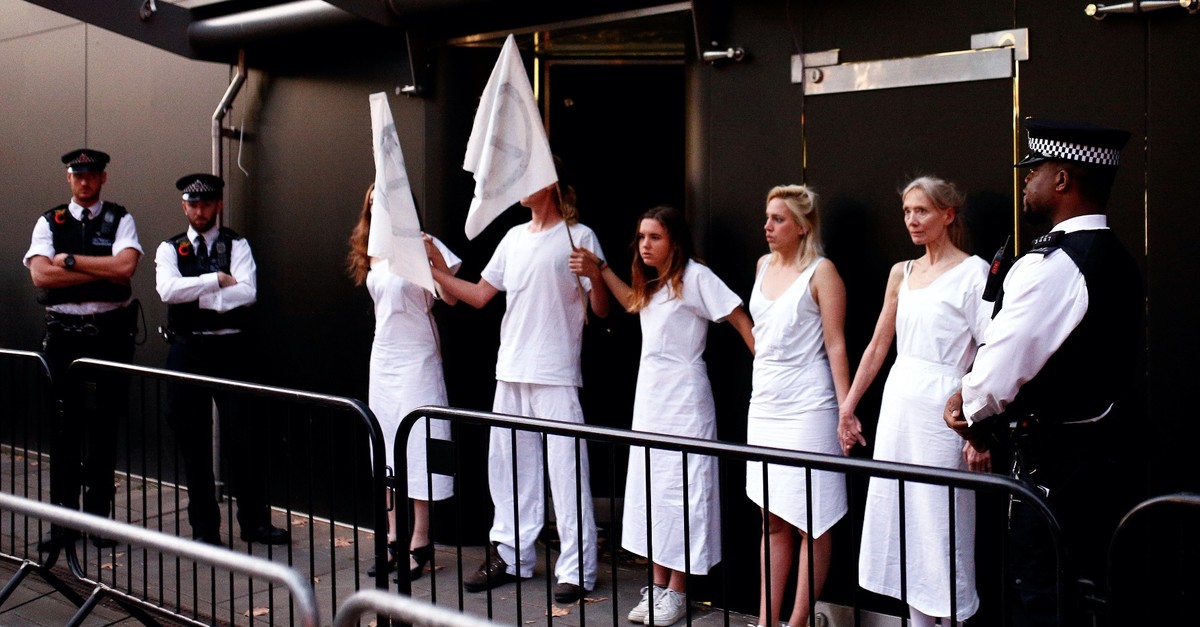 Police officers stand guard as Extinction Rebellion climate change activists glue themselves to the doors during London Fashion Week in London, Sept. 13.
by Sep 16, 2019 12:06 am

Climate activists Extinction Rebellion disrupted the start of the glitzy event that opened on Friday by spilling fake blood outside the venue to highlight the environmental damage caused by fashion. Oxfam urged shoppers to only buy used clothing this month under its Second Hand September campaign, backed by designer Vivienne Westwood — who staged a climate change rebellion on her catwalk last season and model Lily Cole. While event organizers, the British Fashion Council, unveiled an initiative, The Institute of Positive Fashion, which it hoped to set industry standards for greener business models.

Fashion is one of the world's most damaging industries, with figures showing it is responsible for about 10% of all greenhouse gas emissions, and Britons are the biggest buyers of new clothes in Europe according to Oxfam.

"It feels remarkable that we would just continue a kind of circus of fashion, bearing in mind the crisis that we face," she told the Thomson Reuters Foundation.

LFW organizers countered the criticism, saying they offered a platform to promote sustainability, while others said haute couture should not be blamed for the sins of the high street and cheap, fast fashion.

Brands are also facing growing pressure both from consumers and from those within the industry who fear climate change could impact their business model. A coalition of 32 of the world's largest fashion groups and brands last month published a manifesto with objectives and targets aiming to minimize the industry's impact on the climate, oceans and biodiversity. While designers are increasingly experimenting with innovative materials, recycling schemes and even digital clothing, some climate activists dismiss such change as skin-deep "greenwashing" that failed to target the root issues.

The charity Oxfam said Britain's monthly fashion habit created a carbon footprint larger than flying a plane round the world 900 times with the production of one cotton shirt produces the same amount of emissions as driving 35 miles.

For the fashion industry to survive, it must change to offer exclusive experiences, new platforms and different ownership models instead of making ever more clothing, according to Jennie Rosen, the Swedish Fashion Council chief executive. "Switching from regular to organic cotton is not going to do it. And neither will another 'Fashion Week," she said, explaining the surprise decision to call off this year's Stockholm Fashion Week to focus on launching a more sustainable alternative.