Konya: lose yourself and find your soul 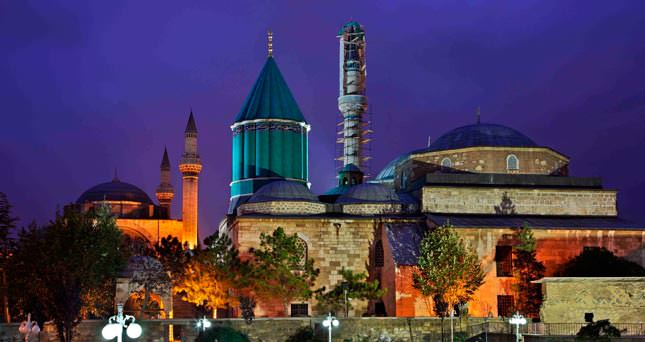 Konya, one of Anatolia's most popular cities for tourism, holds the key to the fine arts, Rumi's poetry, whirling dervishes and a magnificent history

Istanbul (Daily Sabah) - Renowned for its turquoise tiles and whirling dervishes Konya is the conservative city that lies in the heart of Anatolia's wild plains which is surrounded by mighty mountains. To the eyes of a newcomer the people of Konya may seem as plain as the ones surrounding them but don't be mistaken by the lowered gaze of women and humble words of respectful men, Konya is a city with heart and soul. With roots that go back further than the Ottoman Empire the history can be breathed in with the air, touched with the cobblestones. But history is not all that Konya is. A strong industry and vast agricultural fields also make this city paramount to Turkey.

Being the final resting place to eight Sultans of Seljuk Sultanate of Rum the mausoleum and the mosque itself served many years as the "Mosque of the Throne". The mosque itself was originally a basilica that converted to a mosque after the conquest of the city. But many figures of the building added later on. Additions and alterations didn't end with Seljuk Sultanate, Ottomans contributed the marble mihrab, minaret and the eastern door as well. The tomb of the sultans is a perfect example of the Seljuk architecture with its many sides and conic roof.

While the roots of the city are old, recent monuments are also one of Konya's strong points. The Monument of the Martyrs honors the lives lost during the Turkish War of Independence, Korean War and Cyprus Peace Operation. Since its opening at Dec 17 2008, over 2 million people visited the monument. Museum also contains a 3D show which portrays the state Konya was in during the Turkish War of Independence.

It is a customary dance performed within the "Sema", or worship ceremony, through which dervishes (also called semazens) aim to reach the source of all perfection, or kemal. This is sought through abandoning one's nafs, egos or personal desires, by listening to the music, focusing on God, and spinning one's body in repetitive circles, which has been seen as a symbolic imitation of planets in the Solar System orbiting the sun.
Last Update: Jun 20, 2014 4:08 pm
RELATED TOPICS