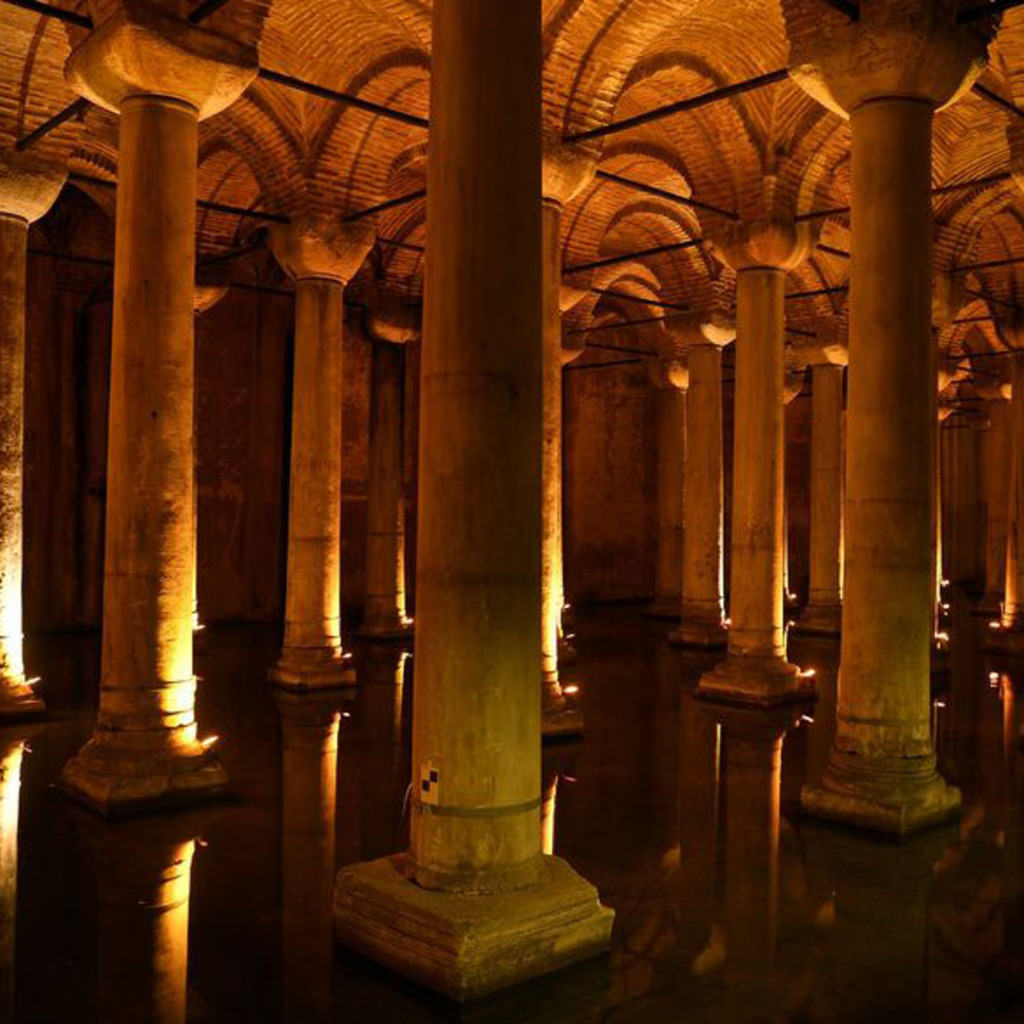 Yerebatan Sarnıcı, one of the largest cisterns that lie beneath the city of Istanbul, is located 500 feet southwest of Hagia Sofia and was built in the sixth Century during the Byzantine Empire

"Night had fallen on the ancient Byzantine capital. All along the banks of the Sea of Marmara, floodlights flickered to life, illuminating a skyline of glistening mosques and slender minarets. This was the hour of ish'a [evening call to prayer].
'La-ilaha-illa-Allah There is no god but God.'

While the faithful scurried to mosques, the rest of the city carried on without a glance; raucous university students drank beer, businessmen closed deals, merchants hawked spices and rugs, and tourists watched it all in wonder.
This was a world divided, a city of opposing forces — religious, secular; ancient, modern; Eastern, Western. Straddling the geographic boundary between Europe and Asia, this timeless city was quite literally the bridge from the Old World... to a world that was even older."

On Istanbul, from "Inferno" by Dan Brown Istanbul's famous Basilica Cistern (Yerebatan Sarnıcı) is the site of the end of world-famous author Dan Brown's latest novel, "Inferno." After Brown's book was published, the Yerebatan Sarnıcı gained increased interest and popularity and was visited by more than two million people last year.

There are several ancient cisterns in Istanbul. The largest and most famous is the Basilica Cistern, called such because it is underneath the Stoa Basilica. The Cistern, located 150 meters southwest of the Hagia Sophia on the historical peninsula of Sarayburnu, was built in the sixth century during the reign of Byzantine Emperor Justinian to supply water for his great palace.

The Basilica Cistern is a mega structure that spans 9,800 square meters and features 336 marble columns, aligned in 12 rows of 28, nine meters tall. The columns are mainly Ionic and Corinthian styles. The Cistern is described as "forest of the columns," an array of beautiful columns. One, dubbed the peacock column, in particular garners admirers as it is engraved with raised pictures of a hen's eye, slanted braches, and tears. It is believed that this column was put there in the memory of the slaves who passed away during the construction of the Cistern.

Fifty two stone steps descend into the entrance of the Cistern. The Cistern is surrounded by a firebrick wall with a thickness of four meters and coated with a waterproofing mortar. The Basilica Cistern's water came from the Eğrikapı Water Distribution Center in the Belgrade Forest, which lies 19 kilometers north of the city.

Well then why did the bestselling author Brown choose the Basilica Cistern for the conclusion of his novel? Because the author is focusing on Dante's "Inferno" in his novel and he repeats the following key lines in the several chapters of the book:
"Follow deep into the sunken palace, for here, in the darkness, the chthonic monster waits, the submerged in the blood red of the lagoon that reflects no stars." The Basilica Cistern is also named the Sunken Palace because its magnificent marble columns standing in water and built underground resemble a palace.

What about the chthonic monster who is submerged in the blood red waters and waiting in the darkness?
Chthonic in Greek Mythology is used to describe the deities and the spirits of the underworld. Medusa is the most famous of the three monstrous Gorgon sisters. She was a monster that was once a beautiful woman but offended Athena, the goddess of war. According to the myth, Medusa was enamored with Perseus, Zeus's son. Athena was also Perseus' heroic protection from any harm. Envious Athena turned Medusa's hair into snakes, and Medusa could turn people who looked at her into stone. 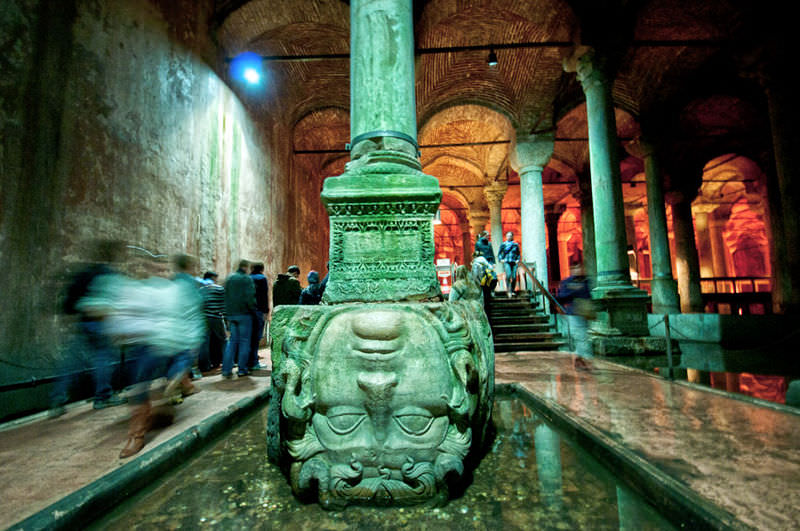 Visitors often wonder why there are Medusa heads in the Cistern and why they are upside down and sideways. As a tradition, Medusa heads were often placed on monuments, in this case watching over the Cistern as apotropaic guardians. Large Gorgon images were frequently used to protect important places in the ancient world. It is believed Christians replaced them in the wrong order to humiliate the faith of the pagans and show Christianity is superior. Despite this myth, it is widely believed that the columns were placed sideways or upside down only to be the exact size to support the column.

The Basilica Cistern, with its Medusa pillars and mythological references, was used in the climax of the novel. Its appearance in Brown's novel is not the only presence of the Basilica Cistern in literature or media. The Cistern was used as a location for the James Bond film "From Russia with Love." The finale of the film "The International" took place in the Cistern. Finally, the Cistern is featured in Clive and Dirk Cussler's 2010 Dirk Pitt fiction novel, "Crescent Dawn."

The Basilica Cistern is a must-see site in Istanbul. Visitors will feel its bewitching atmosphere as soon as one hears the water dripping from the ceiling and look around in the dim light. After walking on the wooden platforms and visualizing the history of an old civilization, visitors will never forget the moment.