Ney, the "absolute" instrument of the human soul 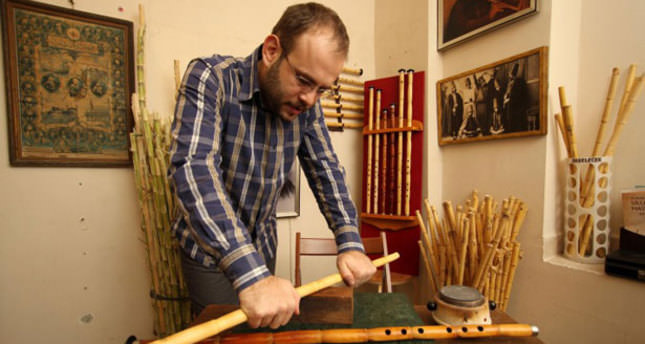 The famous neyzen Melih Berse explains the significance of the Ney in an interview with Daily Sabah A musician who chose to focus on the ney from a very early age, his passion for the art is clearly heard his music. Now a professional neyzen (Flute player) and a teacher, Berse whispers the secrets of the ney to upcoming musicians

What is the importance of the ney (reed flute) in Turkish and Islamic culture?

The Turkish ney is known to be associated with the prominent "Masnavi" of the world's most renowned and acclaimed Sufi poet, Mawlana Jalaluddin Rumi. The "Masnavi" opens with "bişnev ez ney" (i.e. listen to the ney), hence the connection.

The ney has therefore become the most significant musical instrument in Turkish-Islamic culture. Many commentators put great importance on the comprehension of Rumi's "Masnavi."

İsmail Ankaravi, Abdullah Efendi and İsmail Hakkı Bursevi wrote commentaries about the Masnavi. It is possible to observe the influence of the ney in the cities of Morocco and India where there are Turkish and Muslim populations.

- Can you tell us about the history of the ney and its origin?

The origin of the word ney dates back many years. In Sumerian culture, it is known that the ney came from the family of a wind instrument named "na." Na used to be made from cane. The person who plays the ney is called "nayi" in Arabic and "neyzen" in Farsi. The history of the neyzen is associated with the "Mevlevi" order since it is considered as a sacred instrument among Mevlevi sects.

Rumi was the first known neyzen, and Kutbün nayi Hamza Dede was the head of Rumi's dervishes. The ney has become the most important instrument, not only in Sufism, but also in other Turkish music genres.

- What is the process involved in making a ney?

There are 22 types of ney, including basic, "mağbeyn" and "nısfiye." According to its pitch, each type of ney takes a different name, such as "kız," "Mansur," "süpürde" and "bolahenk." The Turkish ney has three main parts: cane, "parazvane" and "başpare." The "parazvane" is a metal ring that is fixed on the edges of the ney to avoid cracking. A mouthpiece called the "bâşpare" is attached on the top hole in order to obtain a clear sound.

Though the bâşpare is usually made from buffalo horn, today it can also be made from plastic. The most suitable cane is grown in the Mediterranean region, in particular Samandağ (Hatay). Cane is harvested in October-December. Then the outer surface of the cane is peeled and left to dry. Since newly harvested cane is green and wet, it is left in the sun until it becomes dry. Following this, the most suitable cane is chosen according to pitch type. Heating its uneven nodes reshapes the cane. It is very important not to overheat the cane during this process. The inner part of the cane is cleaned using a long rasp up to its sound box. Then, the sound box is opened with a short rasp.

After this, the notes (holes) are defined and rubbed with emery. The ney's pitch and intonation is controlled by the diapason.
The cane is cut at the necessary parts to adjust the pitch. To avoid cracking, the metal ring (parazvane) is fixed on the cane. Finally, the mouthpiece (bâşpare) is fixed, and the pitch of the ney is tested once again. The ney is then coated in oil.

- The difficulty of playing the ney is a known fact. Are there any special methods to play this instrument?

It is generally hard to play any instrument. In other words, it is hard to play a musical instrument very well. I think that playing an instrument is similar to learning a language. Every language has its own difficulties. Therefore, it is hard to say that playing a shrill pipe is more difficult than playing the ney. There are different physical characteristics required to play an instrument. For instance, it is important to have thin fingers to play the classical kemancha. On the other hand, it is necessary to have thick lips to play the ney. As seen in language training, regular practice is important in playing an instrument.

The apprenticeship period of an instrument usually takes at least five to six years, depending on ability and competence.

- What is the relation between Sufism and the ney?

According to a historical account, after Prophet Muhammad ascended to Heaven, he shared the secret of God's divine beauty with Ali, his son-in-law.

Ali could not bear the power of God's love and wanted to share the secret of his beauty to a dump well. One day, Prophet Muhammad heard his secret while he was passing by the well. As soon as he looked at the well, he saw that a cane swinging in the wind was telling his secret. Therefore, it is said that the ney talks about the dense love and longing to be with God and always complains about being separated from God. In Sufi culture, the ney is a symbolic representation of the human.

It is believed that when a human's soul is combined with a human body and comes to the material world, the soul continuously yearns for the love of God. The sound of the ney represents its longing towards its reed field.

- Is there any difference between a neyzen and any other instrument player?

Yes, there are differences that should not be considered as a form of superiority. As mentioned before, playing an instrument is similar to learning a language. Then it is not rational to say that speaking the Arabic language is superior to speaking French. However, the Quran is written in Arabic and is regarded a holy language.

In this respect, there is a similarity between a neyzen and a wise man. A wise man has the ability to speak amorously. Likewise, the ney's sound can influence an audience in the same way, and enhances the love of God. Therefore, it is important for a neyzen to play this instrument with the same thoughts.