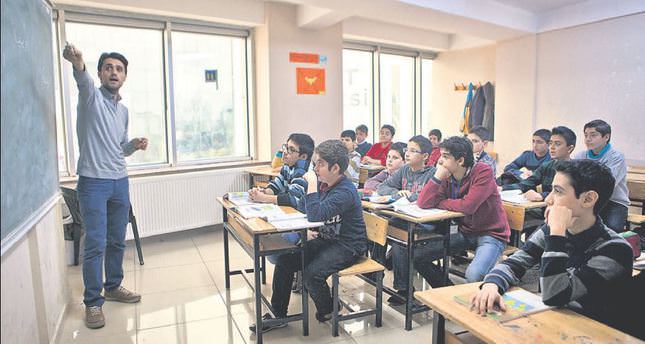 Istanbul is home to eight schools for Syrian students. These schools differ from the Turkish schools in that they offer the Syrian curriculum to children driven from their homes by war. The aim is to educate these children to return to Syria when peace is restored. The name of one of these schools is Qademoon – Syrian Arabic for "We are coming" – referring to the desire to educate the children to be Syrian citizens in a peaceful country.

Arriving in Esenler, I seek signs of a school in vain. There are no daisies taped to the windows, as an ordinary primary school would have.
The building is an anonymous office building. I walk in the front door to be greeted by an old man and a young girl. She is quiet and looks up as I pat her blonde braids. "I am looking for the Syrian school," I say. The old man looks at me suspiciously, and only when I give the headmistress' name does he usher me up the stairs. The main office is small and sparse - expected for a school that survives almost entirely on donations. The school has two sessions, one in the morning and another in the afternoon. It is only in this way that they can meet the demand.

Over 650 students attend the morning session, with 750 in the afternoon session. This is only one of eight schools in Istanbul that offers education to Syrian "visitors" in Istanbul. There are no official numbers for how many Syrians are currently in Istanbul, but it is estimated there are over 10,000 Syrians in just one district of the city. Tuition is TL 200 per student per semester.

However, most families cannot afford this small amount, thus the need for donations. The actual monthly cost for one student to study at the school is TL 190. The administration is determined to keep the school open because only in this way can they help keep the children from going to work in factories or begging on the streets. While the building for the sister school in Esenyurt is provided without charge by the city council, it is a more dire situation in Esenler. The rent, TL 20,000 per month, is normal for such a large building, but the school finds it tough to make ends meet. Recently they have had to lay off teachers. One solution they have found is to start the SMS campaign, "Help small hands hold a pencil!

After discussing the school's financial situation, I go up to meet the children. First is the primary school on the girls' floor. The bell has just rung, and the girls gather around the makeshift canteen, a card table set up with chocolate and juice. Suddenly they see my colleague with her camera. They pose, they giggle, they hide. Normal girls. They crowd around me, showing me their books in Arabic. I ask about their classes in Turkish and those who can speak some Turkish answer me. We go into their classroom, and they proudly show us their artwork displayed on the walls.

There is nothing here to suggest what they have been through. They seem like ordinary primary school students, happy to meet someone new and eager to share.

Then we go up to the boys' floor and suddenly the atmosphere changes. There boys had tension in their eyes that was absent in the girls. They are more subdued, but perhaps it is the presence of two strange women. The teachers take one look at my colleague's cameras, and request that we do not take their photographs. It could cause problems for their families who are still in Syria.

We go into the English classroom. It could be any English classroom in Turkey. The students take their seats. One boy at the back is sitting by himself, hidden by the hood of his sweatshirt. The teacher tells them to group up, they are going to do a speaking exercise. The inevitable "What does he want?" "We have to move?" "Oh sigh," shuffle, shuffle, which may be seen in any classroom anywhere in the world, ensues. The boy in the hoodie and one other boy are left out of the groups and the teacher shows them which groups to join.
There is the normal teenager unwillingness. The teacher then tries to get the energy level up. "Let's find names for our groups," he says cheerfully. "Leaders," yells the first group. "Heroes," shouts the second. The third group shouts "Leaders!" "No," the teacher says, "That name has been taken.

Think of another one." They think for a while, and they say "Tech Group!" When I was teaching, the names would have been Lions, Canaries, or any other phrase referring to a sporting or pop theme. Upstairs in the teachers' room, the instructors tell me about the effects of the war they see in the children on a daily basis. They say the girls are more traumatized, but perhaps it is the girls' ease in making connections that helps them through the process. In Syria, those learning English in primary school are taught to draw a picture for every letter of the alphabet. The norm was A for apple, B for ball and C for cat. Now, here, after having escaped a vicious and inhumane war, they draw A for apple, B for bomb and C for cat.

Due to the lack of space, some children are homeschooled. They are given textbooks and come in occasionally for exams and to talk to teachers. However, the school no longer has a functioning photocopier. As a result, the creation of new classroom material is extremely difficult.

The teachers are trying to make do with what they have but there is no way to purchase new books and they are worried about the lack of fundamental materials. Special courses are offered to help the children overcome trauma.

Parents are also offered help for combating trauma, as well as special courses in inter-familial relations in crisis situations.

The children are subject to normal immunization programs and healthcare follow-up. And it is not all work and trauma therapy. The children go on outings, have extracurricular activities and put on plays. Last year, their play, "Peace Bread," caught the attention of the Turkish prime minister and they were invited to Ankara to give a performance.

I left the building with a wistful feeling of wanting to do more. Part of me wanted to shout, "I'll volunteer to teach English for free if that will help you stay open." But I knew that the children did not need a teacher brought up in the cozy West, one who had only a fuzzy idea of what they had been through. What these future heroes and leaders need are their Syrian teachers, people who can connect with them on a level that we cannot begin to fathom.